Jharkhand: Read Through The La..

Manipur: Tour the Land of Gems through these books

Andhra Pradesh: From the libra..

Manipur: Tour the Land of Gems through these books 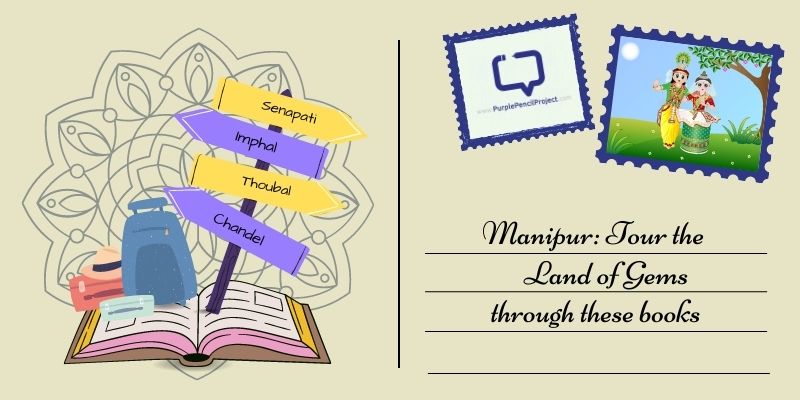 Manipur is strategically located in the Northeastern corner of India bordering Myanmar. The state serves as a corridor for India to the South East Asian countries and offers immense possibilities for the growth of tourism and regional business.

The state has a rich cultural past dating back centuries. It is the birthplace of Raas Lila- a renowned form of classical dance which was created by Maharaja Bhagyachandra. Manipur is also the birthplace of Modern Polo and the locals call this game ‘Sagol Kangjei’.

A land of festivals, where almost every month the people of Manipur get together to celebrate various festivals which reflect its rich culture, traditions and religious practices, has churned out literature of immense quality and depth. We hope every reader could find something to make them realise the depth beyond the beauty of Manipur.

Blurb: Manipur has a rich tradition of folk and oral narratives, as well as written texts dating from as early as in eighth century AD. But it was only in the second half of the twentieth century that women began writing and publishing their works. Today, women’s writing forms a vibrant part of Manipuri literature, and their voices are amplified through their coming together as an all-woman literary group. Put together in discussions and workshops by Thingnam Anjulika Samom, Crafting the Word captures a region steeped in conservative patriarchy and at the center of an armed conflict. It is also a place, however, where women’s activism has been at the forefront of peace-making and where their contributions in informal commerce and trade hold together the economy of daily life.

Blurb: The Manipuri writer Binodini’s Sahitya Akademi Award-winning historical novel The Princess and the Political Agent tells the love story of her aunt Princess Sanatombi and Lt. Col. Henry P. Maxwell, the British representative in the subjugated Tibeto-Burman kingdom of Manipur. A poignant story of love and fidelity, treachery and valour, it is set in the midst of the imperialist intrigues of the British Raj, the glory of kings, warring princes, clever queens and loyal retainers. Reviving front-page global headlines of the day, Binodini’s perspective is from the vanquished by love and war, and the humbling of a proud kingdom. Its sorrows and empathy sparkle with wit and beauty, as it deftly dissects the build-up and aftermath of the perfidy of the Anglo-Manipuri War of 1891. Binodini is the supreme stylist of contemporary Manipuri literature and an icon of Manipuri modernism, and her tale of forbidden love and ostracism vividly brings to life the court and manners of a little-known Asian kingdom. In doing so, she recovers its little-known history, untold relations with India and Great Britain, and a forgotten chapter of the British Raj.

Blurb: In Highway 39: Journeys through a Fractured Land, Sudeep Chakravarti attempts to unravel the brutal history of Nagaland and Manipur, their violent and restive present, and their uncertain and yet desperately hopeful future, as he travels along Dimapur, Kohima, Senapati, Imphal, Thoubal, and their hinterlands—all touch points of brutalized aspiration, identity, conflict and tragedy. A fourteen-year-old Naga girl who dies resisting a soldier’s attempt to rape her—and is now an icon. An eleven-year-old girl was abducted by police in Manipur because they want to trap her parents. A faked encounter in Imphal kills a former rebel, and also an innocent lady and her unborn child. A family in Kohima still trying to come to terms with the death of their youngest child in a mortar attack.

Chakravarti also interacts with security and military officials, senior bureaucrats, top rebel leaders, and human rights and social activists, to paint a terrifying picture of a society and a people brought repeatedly to breakdown through years of political conceit and deceit, and stress and conflict.

Blurb: Death be denied, Faith be restored, rumours be flying, memories be evoked, humanity be restored… Wari came to be heard and Wari continues to be told… Wari which means ‘story’ in Manipuri brings you a cauldron of contemporary Manipuri fiction seasoned with age-old tales of magic, black art and deep cultural beliefs that are unique to the state and its people. Linthoi Chanu is the author of The Tales of Kanglei Throne, her debut book based on the mythological stories of Manipur. From an old woman who refuses to die to a small girl venturing into the unknown, Linthoi Chanu’s ‘Wari’ is a collection of eight unusual stories that introduce readers to the rich socio-cultural traditions of Manipur.

Blurb: This beautifully illustrated volume showcases Manipur, the easternmost state of the country on the India-Myanmar border, through stories and images, revealing the complexities of a region that many have referred to as possessing a tortured beauty. Manipur has often been called mini- India. Home to different religions, languages, cultures and customs, Manipur is, indeed, incredibly diverse, much like the country of which it is a part. Yet, this feature is also what makes it one of the most incredibly interesting places to visit and experience – a fact that is often overlooked due to the dearth of written material and, importantly, visual representations of the myriad aspects of the state.

Shadow and Light: A Kaleidoscope of Manipur takes the reader on a visual journey through thousand years of history and the art, culture and traditions of the multiethnic people of Manipur. Through nuanced essays and captivating visuals on the state’s history, its natural treasures, its culture, food, local crafts and performing arts, this edition is an ideally collectable gift for culture enthusiasts, travellers and nature lovers alike.

Blurb: In her powerful, poignant book—one of the best non-fiction works from India in recent years—Anubha Bhonsle examines the tangled and tragic history of Manipur, and of much of India’s North East. Through the story of Irom Sharmila—on a protest fast since 2000—and many others who have fallen victim to violence or despair or stood up to fight for peace and justice, she shows us an entire society ravaged by insurgency and counter-insurgency operations, corruption and ethnic rivalries. Drawing upon extensive interviews with personnel of the Indian army and intelligence agencies, politicians and bureaucrats, leaders of insurgent groups, Irom Sharmila and her family and ordinary people across Manipur, Anubha Bhonsle has produced a compelling and necessary book on the North East, the Indian state, identity politics and the enormous human cost of conflict.

Blurb: This book tells stories of some very chilling violent incidents that took place in the insurgency-torn state of Manipur during the 1990s, described as seen on the ground by the Author. Stories of innocent public suffering as victims of security force excesses, and inhuman tactics used during communal and ethnic clashes, convey how the common men got trapped in conflict situations, unable to predict what awaits them, when, where and how. The book also points out shortcomings in the system, both at the institutional and ground level and force incompetency in tackling insurgency and guerilla tactics, especially in crowded urban settings.

Blurb: Born to parents who were landless agricultural labourers in the state of Manipur in Northeast India, Mary Kom’s story is one of relentless struggle and unflagging passion for boxing. A childhood of hard labour prepared her body for the sport as well as any fitness training might have. Her own will and aggression carried her through the minefield of politics that any sport in India is. Nimble of foot and pulling no punches, the boxing ring was her domain. M.C. Mary Kom is not yet ready to call it a day, but here she tells her story so far, no holds barred — her tough childhood, her rebellions and how she held her own in the male world of boxing. It’s all packed into this inspiring, exhilarating tale of a woman who faced impossible odds in a man’s world — and won.