Horror stories where you least.. 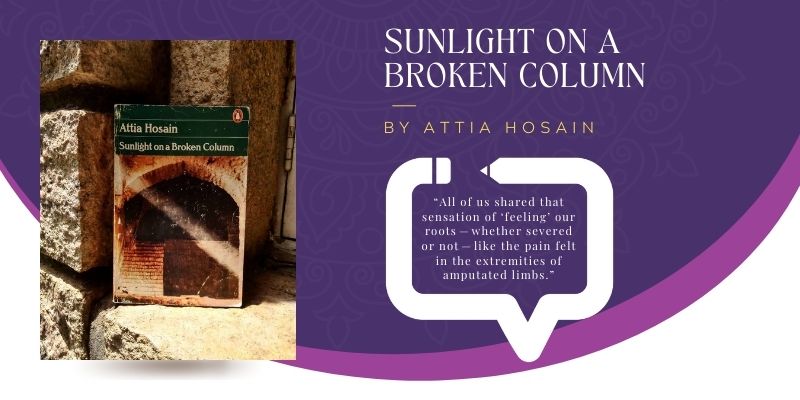 Sunlight on a Broken Column by Attia Hosain is a must-read for fans of Manto, Chughtai, and Partition Literature

I discovered Partition literature long after history lessons in school. One story that still haunts me is Sadat Hasan Manto’s ‘Toba Tek Singh‘. In it, the titular character echoes the physical and emotional chaos of millions who were displaced by India’s partition. During my period as a teacher, I took the story to class to show my students the absolute implausibility of the India vs. Pakistan debates.

They struggled to reconcile two realities – their imbibed ideas of the enmity of two countries and their discovery of the horror of its oneness torn apart. In them, I saw reflected my own childhood belief that we were separate. Discovering the politics of partition would destroy that naïve belief. It was a horrific separation that tore flesh and blood apart.

In Manto’s short story, the rupture of place and the dream of a single space provokes madness and death. Ismat Chughtai’s stories present a glimpse of that pre-partition dream – Indian streets undivided by communal hatred, Diwali and Eid taking turns to let love blossom between childhood friends.

Attia Hosain, like Manto and Chughtai, also belonged to the Progressive Writer’s Movement. She crafted this novel of loss and longing that reflects upon Laila’s personal journey as a woman, even as the country she knows by blood and tears, is torn apart.

Sunlight on a Broken Column follows the life of Laila, an orphaned young woman from an affluent Muslim family, whose aunts — a widowed mother, and an educated spinster—are severe and austere. As her grandfather lies dying, her fate is soon to be decided by her uncle , the more liberal of the lot. He is modern enough to believe that Laila has to continue her university education, yet conservative in his refusal to accept her love for a man who comes from a background not as distinguished as her own.

The story is set before independence, as the land is hurtling into the storm before the light of freedom falls. In navigating through her own personal discomfort against the patriarchal elements that seek to contain and own her, Laila’s life is equally marked by the events leading up to India’s independence.

Laila is privileged in the society she lives, yet as a woman, understands the helplessness that marks the lives of those less so. She participates in the events of her world, from grand receptions at her house — Ashiana to quiet tea gatherings and tennis games at country homes in the hills, ancestral homes in old provinces of Oudh. She endures suffocating visits with English Governesses, and enjoys pleasant lunches with a courtesan. As the times change, there are meetings in the corridors of University classes, protest marches, and political conversations in dining rooms. Even as she is shielded from the harsher realities of the time, she keenly though passively observes the lives of women around her — women belonging to the lower classes, and across religious identities.

She is largely demure in her anger against men making decisions for her, against women who are bound by patriarchal laws. Yet, in the moments that kindle a response, her words become strangers in her struggle to enunciate her female identity. In these moments, I understand her deeply — not much has changed since.

The conversations are heavily anglophile, the atmosphere always mirroring the tender emotions in her heart. The book details the architecture, dusty roads, rich clothing and the fashion of those times. There is also the spectre of slow decadence: a decaying grandeur of an India that is forgetting herself in her fight for freedom and equality to all her people. All this is embedded in the emotion Attia Hosain crafts through the semi-autobiographical character of Laila — a woman constantly feeling like she doesn’t belong. And she writes as a woman born within this displacement. There are traces of Rahel and Ammu from The God of Small Things, and Liesel from The Book Thief.

“All of us shared that sensation of ‘feeling’ our roots — whether severed or not — like the pain felt in the extremities of amputated limbs.”

Laila’s interaction with the lower class of people is seldom compassionate. Her affluent upper class background colours the way in which she comments upon the lives of the marginalised around her – regardless of religion. Although she observes the lives of the less fortunate women and men around her, she is seldom in a position to actively intervene to bridge the gaps of class and caste. One such memorable character is Nandi — a close childhood friend, the daughter of Jumman, the washerman. She uses a privileged language (often disability- unfriendly) to describe their misery and distances herself from their struggles. There are occasional moments (like embracing Nandi, when she returns after the death of her mother) where Laila attempts to understand more than her “breeding” requires of her, but they are far and few.

“When we were not arguing we were dissecting and questioning life, with the fear and the courage, the doubts and the certainty of the inexperienced, questioning youth. Our world was bounded by our books and the voices that spoke to us through them were of great men, profound thinkers, philosophers and poets.

I used to forget that the world was in reality very different, and the voices that controlled it had once been those of Baba Jan, Aunt Abida, Ustaniji, and now belonged to Uncle Hamid, Aunt Saira, and their friends. Always I lived in two worlds, and I grew to resent the ‘real’ world.” (Hosain, 128)

I will cherish this old copy of the novel I found in the basement of Goobe Book Store in Bangalore. I love the perspective and how Laila carries herself from chaos to conviction in her love for the man of her choice. Hosain’s partition story is crafted with an indelible strength and independence that comes from a very deep and personal place in her own consciousness.

Attia Hosain was a British-Indian novelist, author, writer, broadcaster, journalist and actor. She was a woman of letters and a diasporic writer. She wrote in English although her mother tongue was Urdu, and has made contributions to post-colonial literature