On our new chapter, the Purple..

The Great Smog of India by Sid..

English poetry in Kolkata found itself blooming frutifully in the 1950s, often called the ‘transitional decade’. Romantic poetry then was represented by Toru Dutt and Sarojini Naidu. Among the poets then who belonged to the romantic school included B.D Shastri (his Tears of Faith published in 1950), Adi K. Seth (his Rain in my Heart was brought out in 1954), Manjeri Isvaran (Rhapsody in Red) and Harindranath Chatterjee (Spring in Winter, published in 1956).

Manjeri’s romantic poetry had its own variety. In his poems we find a curious juxtaposition of pain and violence with romantic exasperation. In his poem ‘The Neem is a Lady’, the neem tree is pictured as a queen, who dreams of being married blissfully to the majestic Pippala that stood nearby.

Harindranath Chatterjee, whose ‘The Feast of Youth’ was published in 1918 was praised by Shri Aurobindo in the most glowing terms.

As we turn to ‘new’ poetry of the 50s, it immediately appears different from the romantic type. This new poetry movement was spearheaded by mainly three poets Nissim Ezekiel, Dom Moraes and P. Lal. Much of it was published by Writers’ Workshop, a publishing firm founded in Calcutta in 1958 by P. Lal and his close associates. They brought out a bi-monthly journal titled ‘Miscellany’ for the propagation of this new poetry. Lal co-edited with his fellow poet K. Raghabendra Rao an anthology ‘Modern Indo-Anglian Poetry’ in 1959. In its introduction, M.K. Naik wrote:

The phase of Indo Anglian romanticism ended with Sarojini Naidu.

This assertion might have held certain relevance for these new poets who affirmed their faith in a vital language which ‘must not be a total travesty of current pattern of speech’.

Professor K.R.S. Iyengar subsequently drew readers’ attention to the good and bad aspects of the manifesto of Lal and Rao:

All this would be no doubt make and they do make a viable poetic world, but there could be still more complex more comprehensive poetic worlds.

Talking about complex and comprehensive poetic worlds, English poetry trends of Calcutta found new connotations in the hands of some poets who not only brought out the very essence of Bengali milieu in their poetry but also their own reactions as individuals living in this modern nuclear world having its own paradoxes of agony and ecstasy.

Take for example Amit Shankar Saha’s book of poems, ‘Balconies of Time’ which mix the private and the personal with the public and the social into an aesthetic whole. As the title suggests, these poems chart an evolution of time from one state of situ to another. They bring in moods where the experiences of the poet become poetry.

Or for that matter Sanjukta Dasgupta’s ‘Lakshmi Unbound’ which according to her is her ‘freedom song that resonates in the recesses of the mind’.

Sharmila Ray’s ‘Scrawls and Scribbles’ treats the universe as a labyrinth while Kiriti Sengupta’s collection of short poems ‘Healing Waters Floating Lamps’ communicate his profound and deep spiritual experiences. Sudeep Sen’s ‘Fractals’ has poems which go beyond geographical boundaries and in Gopal Lahiri’s ‘Tidal interlude’ we find ‘nature’ having ‘a special place’.

Kushal Poddar’s ‘Scratches Within’ contains poems which throw a unique perspective on the most mundane aspects of our daily life. In her book of poems ‘Echoes’, Mallika Bhaumik talks about  a reflection of her feelings as she  walks through the known and unknown alleys of life. Having been intrigued by the continuous ebb and flow of life and the incessant cross currents of human emotions floating in it, she has tried to delve into the intricacies, complexities and entanglement of human relationships that we see all around us.

In her debut poetry book ‘Death in the Holy Month’, Sufia Khatoon manages to create a fusion between her prayers and her dreams with the realities of life. When she writes :

The conversation of prayers about to be said /By the child going to bed and the man on the stairs /Who climbs to his dying love in her high room, /The one not caring to whom in his sleep he will move /And the other full of tears that she will be dead.

My point of bringing in Thomas while talking about Sufia’s poems, while trying to decipher them, is not to be taken as accidental or coincidental, for I do have that sense and feeling, that with the advent of internet, the poets from Kolkata are getting actually nearer to our western or far eastern counterparts. Our hopes, struggles, dreams, aspirations are now becoming more conspicuously related to poets of other worlds. Perhaps this new world will bring in more poets and more of poetry, beyond geographical barriers.

In capacity of being the executive editor of a webzine ‘The Kolkata Review’, I receive poems from different parts of the city and also from remote areas of Bengal almost every day. It astounds me how not only the well-known poets like Amita Ray, Sarmita Dey or Anindita Bose  are contributing  but also lesser known ones are putting on paper their pens, every single day for the growth and development of English poetry in this part of the globe. I have come across works of poets as young as thirteen or fourteen years of age, those budding ones and their words make me ponder and ruminate. I wonder what is there in the soil of this land that instigates so much of poetry. Is it sheer romanticism and the universal philosophical appeal of Tagore? Is it the urban folklore of Jibananda Das? Is it the eclectic mix of reality and myth of Sunil Ganguly and Sankha Ghosh? Is it the lyricism of Srijato? Or mysticism and artistic bent of mind of Purnendu Patri?  Or is it a legacy of writing love poems that we are carrying for ages as inherited by us from our progenitors?

Perhaps it is the combination of all. Perhaps this combination will keep the so called dying art of poesy intact despite odds, like lack of publishing opportunities, because poetry is often considered ‘unsaleable’. However, it is really heartening that people like Kiriti and Bitan and Hawakal Proshona in general are working in tandem to promote poetry, both English and Bengali.

In addition to that I deem it absolutely appropriate to note that different poetic groups are being formed here in the city of Kolkata which are doing all that could be done for English poetry, like Rhythm Divine, The Kolkata Review poetry group or for that matter Poetry Paradigm.

So at the end of the day, we can always claim with alacrity, hail to poetry!

Moinak Dutta is a teacher of English at Kolkata. His book reviews, poetry and fiction has been published in several magazines. He has translated works of Rabindranath Tagore, Purnendu Patri, Joy Goswami, Nirendranath Chakraborty and some contemporary Bengali poets. You can reach out to him at moinakdutta@yahoo.co.in 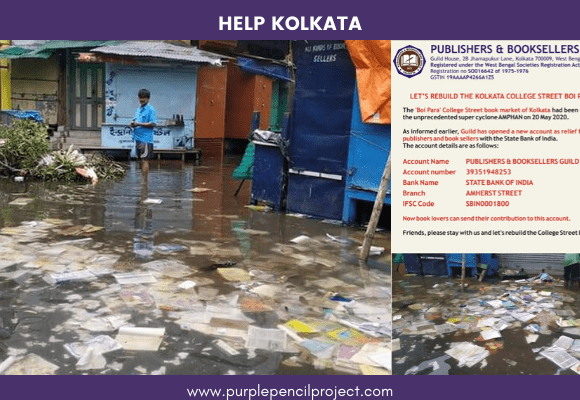 Amphan’s effect on publishing: How to Help