Books about India for children and young adults

Books about India for children and young adults 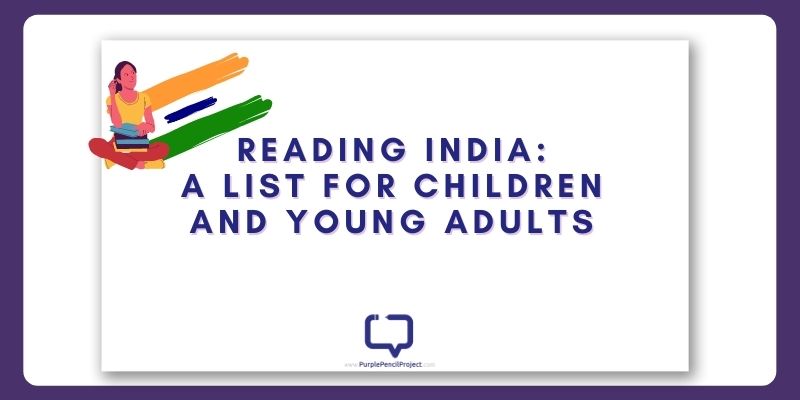 This list of books about India for children and young adults has been created with inputs from Mansi Shetty, Founder, What Are You Reading Today?

It is the stories of our past that prepare us to bring in our future. And what better way to celebrate the week of our 73rd Republic Day, the day India adopted its Constitution, to look at some of the best books for kids and young adults to understand the history of India and the people who have contributed to its making?

Heroes the Colour of Dust by Amit Majmudar

Author of the critically acclaimed titles such as Godsong, Soar and Sitayana, Amit Majmudar debuts in the children’s space with Heroes the Colour of Dust. A hilarious take on the events of the Dandi March, it features some of the most ambitious sparrows. Part historical fiction, part satire, the book is the story of daring birds, narrow escapes, bitter vendettas, tragic back stories, sneaky sahibs and stalwart Indians.

In this tale where animals vow to protect Gandhiji and help India rid itself of its colonisers, join the ranks of the Mahatma’s Guards—six sparrows with India’s greatest poet in the mix—as their adventure takes wing!

The struggle for independence was a defining movement that shaped the idea of India. Yet narratives seldom explore how children in different parts of the country were affected by it. This meticulously researched book looks at the past and brings alive Bombay of the 1940s, with the tensions, drama and everyday life in a Bohri Muslim household.

With Mahatma Gandhi’s call to the British to Quit India, the city has become a hotbed of revolutionary activity-student protests, secret magazines and even an underground People’s Radio. Sakina and her friends Zenobia and Mehul desperately want to be part of this struggle for freedom. There is little that they are permitted to do, but at least, they are trying to do something useful, while their mothers are only running a cooking club…

The Year at Manikoil by Aditi Krishnakumar

The war for freedom involves stories from various parts of the country. Here’s one from erstwhile Madras of a little girl Raji who is sent to her mother’s village, Manikoil, along with her sisters and mother.

While World War II rages in Europe and the Japanese army draws closer to India, there is hope for independence and uncertainty looms large. With refugees fleeing from Malaya, Burma and other eastern countries back to India, Manikoil is no longer the peaceful haven it once was.

Read the book to find how Raji finds the courage to deal with it all.

The Puffin Book of 100 Extraordinary Indians by Venkatesh Vedam

The Puffin Book of 100 Extraordinary Indians is a celebration of the outstanding achievements and inspiring stories of those who forged new paths for themselves and others in a way that it continues to affect modern lives.

Whether they climbed the heights, swam the depths, mastered science or track and field, picked the baton of education or activism—each of their stories is replete with big and small victories that continue to inspire.

The radical churn in society and politics, art and culture, science and technology, which makes up the recent history of modern India, was propelled by individuals – women and men who had the vision, courage and determination to leave behind a footprint of change. This second book in the India Focus series looks at some of these extraordinary game changers.

Written for young children, Delhi Thaatha is a biography of Dr. Sarvepalli Radhakrishnan, a much-loved teacher and world-renowned philosopher who served as the first vice president of the Republic of India, then, beginning in 1962, president of the country. Written by his great-granddaughter, who tells the story, with insight and charm, from the perspective of her seven-year-old self, and illustrated in full colour by graphic artist Sunandini Banerjee, Delhi Thaatha offers a rare glimpse into the life, personality, heart, mind, and philosophy of an illustrious statesman, as Chitra Viraraghavan tracks his journey from poor small-town boy to the moment when he takes the oath to serve the country’s highest office.

Becoming me by Rejina Marandi

Liya, a young Santal, is a regular girl from an Adivasi village in Assam, with regular struggles, aspirations and experiences, who finds herself in a journey through life against the backdrop of ethnic riots. An exploration of identity —and the prejudice and discrimination attached to it— this novel marks Rejina Marandi’s debut and a fresh attempt to expose and document a dark corner in the long negation Adivasis in Assam have su ered. Questioning not the social, political and economical roots of it but their painful e ects in a new generation of people, Liya’s story is about her coming of age in a country that may not be entirely hers.

Being Gandhi By Paro Anand

Bored by the annual Gandhi projects, Chandrashekhar the teenager wonders if his teacher is being too unreasonable in asking them to “BE” Gandhi. And then, his world is shaken by events that rock him to the core, forcing him to dig deep and not just find his ‘inner Gandhi’, but become Gandhi. Not for a day or two. But, maybe even, for life. Being Gandhi explores, not Gandhi the man or his life as a leader, but really the Gandhian way that must remain relevant to us. Especially today when the world is becoming increasingly steeped in violence and hate. “

Tales of Historic Delhi: A Walk Through its Many Cities by Premola Ghose

Join the animals of Janwar Dosti — Tunnu the tiger, Zero the giraffe, Lucky the rabbit and all their jungle friends — on a magical historical journey through Delhi. Explore its many wonderful monuments, and discover new places to see and things to do. Tales of Historic Delhi is the perfect guidebook for families visiting the city, and a whole new way to bring history alive.

Candid Tales : India on a Motorcycle by Adithi Rao

Based on the actual five-month-long journey of renowned biker Candida Louis, Candid Tales: India on a Motorcycle rides off the beaten trail to discover eccentric and beautiful people (living and otherwise!), heart-warming cultures, and secret places in which she left her heart behind. In an age of fictitious super heroes, this book introduces the younger generation to a real live heroine of rare spirit and fearless heart, to inspire and electrify them to follow their dreams!

In this book about India for children and young adults, introduced by Derek O’Brien, legendary Indians speak on diverse topics that will motivate young readers: freedom and equal rights, science and sports, friendship and education, the environment and social responsibility, ambition and courage, the love of books and the burden of schoolbags. Even in this age of speed and bite-sized attention spans, these timeless words reach out across years and touch us, provoke us, make us think, and become a call to action.

Dinousaurs are the universally favourite subject of kids; but even as adults, we may be mistaken about their existence as a distance, non-Indian history.

However, “dinosaurs didn’t roam only in faraway America. Join Shankar and his little sister Sandhya on their adventure as they make fascinating discoveries in this first-of-its-kind dino book.”

Ten Indian Animals You May Never See in the Wild by Ranjit Lal is one of the books about India for children and young adults. It tells the survival stories of ten of India’s rarest animals. A few have made a heroic comeback from the very brink of extinction; others have not been so lucky and are spiralling to their inevitable doom.

Award-winning novelist Ranjit Lal writes an engrossing account of how human activity has driven so many beautiful animals out of their natural habitat. A part of the new non-fiction series — The 10s — published by Duckbill books, this book is perfect for children to understand that the need of the hour is to coexist in harmony with the natural world.

From Assam to Kerala to Odisa and Jammu and Kashmir, this series about India for children take the young ones to the major states of our country, giving visual introductions to these wide and varied geographies and cultures.

Little Indians: Stories From Across The Country (English)

A little book about India for chilren and young adults, quite literally is a book of stories and fascinating facts which will take the reader on a double-decker ride across 15 states of India. They emerge distinct and different, like pieces of a jigsaw that create a magnificent whole.

My Country, My Government

What does the Prime Minister do? How are judges chosen? In My Country, My Government, one of the most important books about India for children and yojng adults, Rohini Oomman takes on and breaks down the complicated functioning of the Indian government into bite-size nuggets of information.

From the formation of the Indian Constitution to today’s election system, this book tackles complex subjects in a clear, easy-to-understand way with exercises and explanations. Learning about the way the government works can help awaken a child’s sense of social responsibility. An experienced and well-known educator, Rohini has put together an informative guide which helps children understand how the government functions, while also helping them realise how politics governs every aspect of life.

Other relevant lists to check out: