Nagaland: Culture of the Falco..

Mizo stories from the Land of Blue Mountains

Meghalaya: Culture of the Abod..

Mizo stories from the Land of Blue Mountains 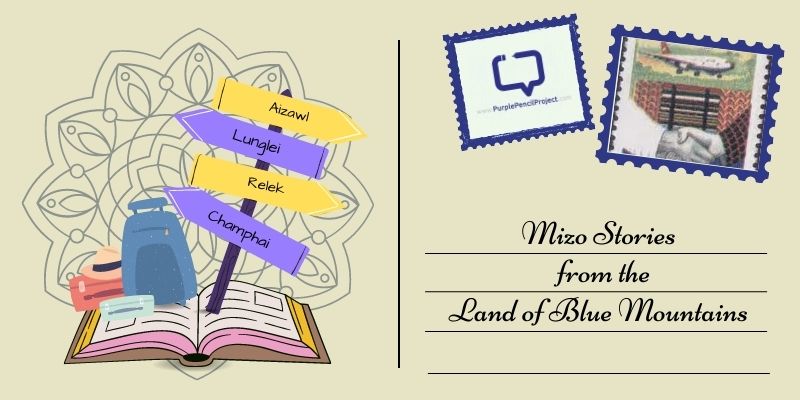 Mizoram, the land of the Mizos or the Highlanders who belong to the Mongoloid race, exudes an exotic charm of its own. From the lush forests dominated by thick bamboo groves, numerous waterfalls that gush down the narrow gorges to confluence into large meandering streams in the deep valleys, dotted with unique landmarks of myriad Mizo stories and folktales, and picturesque villages of houses built on stilts, Mizoram is a land of dramatic seas of morning mists that enfold islands of hills and peaks.

If you have been meaning to visit the state but haven’t yet; or if you have visited it and would love to re-kindle your feelings for the place, here are some Mizo stories that will take you there at once.

Blurb: Malsawmi Jacob takes on the most traumatic period in Mizo history, the insurgency years of the nineteen sixties, to tell the story of a young girl, Zorami. After an uneventful, idyllic childhood, she comes of age at the time when the political unrest and struggle for independence gather momentum and breaks out to devastating effect. Zorami’s life and experiences reflect those of her people, land and culture. The novel is written in Malsawmi’s distinctive restrained, understated, always beautifully lucid style that breaks into poetry in moments of passion.

Blurb: The Camera as Witness lifts the veil off the little-known world of Mizoram and challenges – through unpublished photographs -core assumptions in the writing of India’s national history. The pictures in the book establish the transformation of this society and the many forms of modernity that have emerged in it. It emphasises how ‘indigenous people’ in Mizoram used cameras to produce distinct modern identities and represent themselves to themselves, consistently contesting outsiders’ imaginations of them as isolated, backward and in need of upliftment. The authors demonstrate how mostly amateur photographers used visual images to document a historical trajectory of heady change and continual reinvention, producing distinct modern identities. By virtue of its use of visual sources and its engagement with a wide range of important discourses, this book is relevant for students, historians, social scientists, political activists and general readers looking for a fresh approach to Northeast India.

Blurb: One of the first middle-grade historical novels set in the northeast, When Blackbirds Fly focuses on children growing up in times of conflict. Part of the Not Our War series, the book is a sensitive insight into the ravages of war seen through the eyes of an unnamed young boy.
Set against the backdrop of the two-decade-long civil war and specifically the 1966 bombing of Aizawl, this book is a primer for young adults on a part of Indian history that has been long sidelined.

Blurb: Contemporary Short Stories from Mizoram edited by Margaret Ch. Zama is a study of old Mizo oral traditions which witnesses the rich storytelling experience that spills beyond folktales, from the subtexts and underlying narratives found in the wider context of folklore that cover old sayings, riddles, jokes, games, taboos, women designs, community practices and so on. The contains 18 Mizo stories translated into English. These stories reflect the different nuances of contemporary life of the Mizo and provide honest and often unexpected complex aspects of society whose culture is assailed as it were.

Blurb: In seeking to understand the emergence of Mizo identity, the book makes a general contribution to how identities are formed and constructed. By examining how mainland India views the Northeast, the author engages with notions of how difference plays an important role in the creation of identity. Notions of difference, it is argued, are embedded in the politics of domination and hegemonisation. Another thrust in the book is to look for patterns in social organization that impinge on identity-making that are not far removed from self-ascribed notions about the ethnic self. Such self-ascribed notions are seen as instruments of agency that defy the views of the other, while also organizing the ‘ethnic self’. In this, the community’s engagements with Christianity, which is localised, and its practices surrounding death are seen as prime organisers. Praxis, especially in the context of Christianity and death, is thus seen not only as the chief organisers of Mizo identity but also as the boundary markers around which notions of belonging and exclusion are invoked.

Blurb: Oh, Mizoram is Pillai’s first collection of English poems. While the poems amply illustrate Pillai’s deeply felt enchantment with his immediate surroundings, it is also worldly-wise in the way it zooms out to touch subjects as diverse as the coronavirus and ‘broiler chicken’ politics. This expansive range is unavoidable as Pillai wears multiple hats; he’s been a successful lawyer, a noted orator, philanthropist and thinker.

Blurb: Mizo Songs and Folk Tales edited by Laltluangliana Khiangte is a product of Sahitya Akademi’s project on Indian Literature in Tribal Languages and Oral Traditions, meant to meet the long-felt need for bringing out a systematic series of India’s tribal literature. The volume very beautifully deals with the dialects and languages spoken by tribals in India which are very large in number also. The literary compositions in most of the songs and tales have survived in oral form though some tribal languages have taken to writings as a means of recording literary compositions. It is a known fact that most of these languages have rarely been translated into English or an Indian language as a representation of tribal imagination.

Blurb: This book offers an alternative understanding of the modern history of Mizoram through an analysis of its cultural practices through language, music, poetry and festivals. It explores the roots of modern cultural works not just in Christianity, but also in precolonial Mizo traditional practices. The authors closely examine text, performance and sculptural images, including the first handwritten newspaper Mizo Chanchin Laisuih (1898) and the Puma Zai festival (1907-11) from the early colonial period along with a contemporary sculptural image. They argue that cultural works open up to new forms of interpretations and responses over time. The book indicates that the Mizo creative sensibility enmeshed in theological, capitalistic-material and political/ideological regimes informs its modern enclosures, be it region, religion or nation.