A Full Night's Thievery by Mit.. 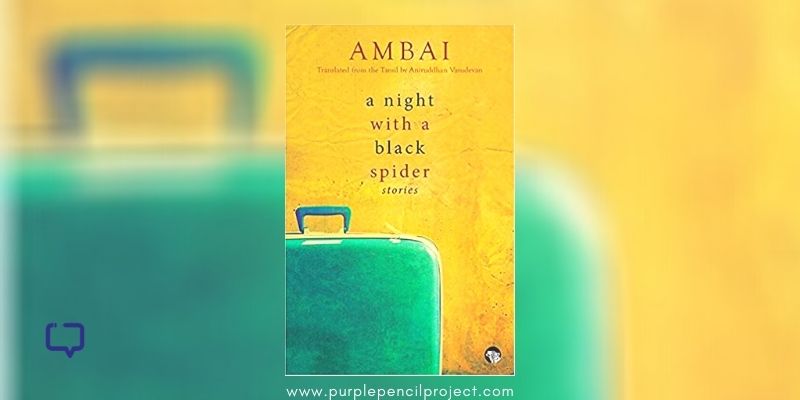 Dr C.S. Lakshmi, who writes under the nom de plume of Ambai, has contributed to Indian literature in no small way. Her works largely focus on themes of feminism and the lives of everyday women that many other writings misrepresent. Translated from Tamil by Aniruddhan Vasudevan, A Night with a Black Spider is, on the surface, a collection of short stories. But it is more than just that—it is a journey through many different lives with different women at their center, going through not too unfamiliar battles, most of them silent, tinting the stories in a common shade.

Translated works can be tricky to review. There’s always a question of how much is lost in translation and how faithful is it. And as a non-Tamil-speaking person, I essentially have to take Vasudevan at his word.

Ambai’s literature is held up to a certain degree of warranted reverence, and although I can recognize the literary and social values of the themes in A Night with a Black Spider, it did not speak to me as much as it did, it seems, to many others. ‘Ambai’ is a name I’d heard before, but this is my introduction to her works, and maybe my unmet expectations also have something to do with the reputation her name carried. But despite my lukewarm impression of this collection of stories, I still found a good deal to like in it.

The stories titled ‘Journey‘, 11 through 20 (although 18 and 19 are oddly missing) are the backbone of the whole thematic structure of A Night with a Black Spider. The stories follow different women at different stages of their distinct journeys as they go through unassociated, but not too dissimilar or alien, experiences. In ‘Journey 13’ we follow an aging woman on a bus on her way to the railway station. She meets a fisherwoman and her five-year-old daughter, and they engage in a seemingly commonplace conversation. ‘Journey 15’ tells a story of a woman and her family travelling to Chennai for a wedding, and have their valuables stolen; and ‘Journey 17’ follows Mythili, a young woman on a train on her way back to Delhi, and she encounters Neerja, a young runaway who would rather face the dangerous unknown of the big city than stay where she was.

We are spiders on the wall in these stories, watching brief moments of those women’s lives. They are ordinary and real, as are the silent social battles they wage and the injustices they face.

‘Burdensome Days’ stands out the most. Bhramara, a musician, navigates married life. She had things she wanted to do on their honeymoon in Paris, she had a life she wanted to lead—and it wasn’t out of the ordinary, but those wishes prove to be unattainable: she was a woman; in a world rive with sexism. Ambai’s aptitude lies in keeping the narratives grounded and powerful when, in someone else’s hands, they could easily have come off as patronizing and saccharine.

The narration style of most of the stories in A Night with a Black Spider, however, despite its relatively simple language (overlooking, of course, the many uses of non-English words and terms) can leave readers asking for more engagement. Sometimes it felt as if Ambai wouldn’t mind it if you stopped reading halfway through a story. Some of the stories felt like they could’ve done with a little more finetuning. The poor use of pronouns where multiple characters converse, and in some cases the abandonment of dialogue tags, can leave the reader wondering who’s who.

Despite the richness of the stories in emotion and social relevance, what most hindered my capacity to fully appreciate them is the seemingly leisurely manner of storytelling—like they might be stories told by your own grandma who is prone to digressions in an attempt to vitalize its themes and characters. This may work for some readers; it did not for me.

When all’s said and done, Ambai remains a modern literary genius. Her works have great relevance to the societal structures we live within today and will undoubtedly be of relevance tomorrow. Opinions differ, and to me, A Night with a Black Spider, although it has a great deal to offer its readers and many will definitely find enjoyable what I didn’t, is not a book I will pick up again.