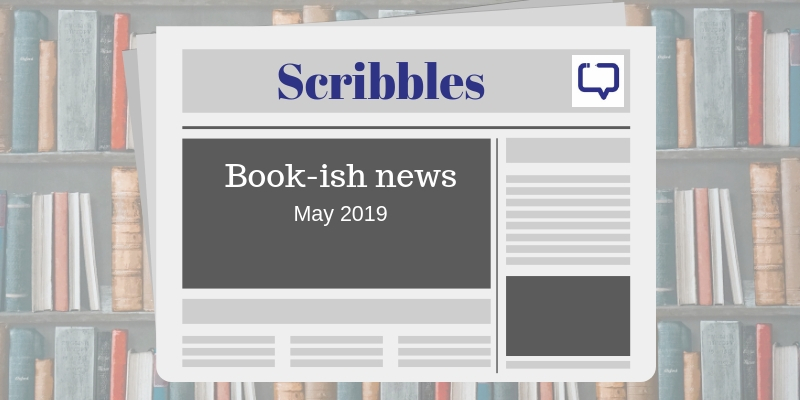 We at Purple Pencil Project keep you updated about the latest happenings in the literary world, both national and international and aim to bring out literary news of the week in this compilation called Scribbles.

Mumbai based Indian writer, Annie Zaidi is this year’s recipient of the Nine Dots Prize for her entry, Bread, Cement, Cactus. Her work includes reportage, poetry and plays, essays and short stories, most notably her Known Turf: Bantering with Bandits and Other True Tales which was shortlisted for the Crossword Book Award in 2010.

The Nine Dots Prize facilitates creative thinking that tackles contemporary societal issues. The entrants of the contest are required to respond to a question in around 3000 words, the winner receives a US$ 100,000 prize to write a short book expanding on their idea.

Zaidi’s expansion of her winning entry titled  Bread, Cement, Cactus will be published in 2020 and will combine memoir and reportage to explore concepts of home and belonging rooted in her experience of contemporary life in India.

A proud moment for Indian literature and proof that we’re slowly but gradually overcoming the hegemony of Western literature.

It was a moment of immense pride for Terang who talked about Lummer Dai’s réputation as a fluent Assamese writer despite belonging to a tribe native to Arunachal Pradesh. Terang recognizes him as the man who bridges the gap between the people of Assam and Arunachal Pradesh. Lummer Dai is proof that literature shatters all boundaries. It is in his memory that the Asom Sabhitya Sabha has constituted an award which is conferred on a person in the field of literature.

Are you a Harry Potter fan? If yes, we have wonderful news for you. Pottermore Publishing has announced four new Harry Potter books. Keeping up with the fans of the franchise who are always thirsting for new content, the four new e-books will focus on the history of the different elements of the wizarding life; their content revolving around the courses which are taught at Hogwarts.

‘In addition to exploring the origins of magic through history and folklore, the eBook shorts will also feature notes, manuscript pages, and charming sketches as previously seen in Harry Potter: A History of Magic,’ reads a statement published on Pottermore.com.

To be initially launched in English, Italian, French, and German, the books are available for pre-order on Amazon, get them here.

Purple Pencil Project brings you an eclectic mix in genres of new releases in the first half of 2019.

Title of the Book: Magical Women, edited by Sukanya Venkatraghavan

Description: Magical Women is a book of stories of India’s first all-female feminist fantasy. It empowers women writers who tell stories the way they want to tell them, celebrating reclaiming, retelling, recontextualizing and recasting long-familiar tales and tropes in unfamiliar ways and bringing about new ways of storytelling. There are dominant themes of rage, revenge, rebellion, self-realization, love, hope, longing as well as laughter. The genres covered by the stories include urban-fantasy, supernatural and horror, and even sci-fi.

Title of the book: In My Heart by Nandana Dev Sen and Illustrations by Ruchi Mhasane

Description: Mia knows that she came out of Mumma’s heart and Papa’s heart. That’s why she’s so much like them. But when Mia learns that she has a tummy mummy too, she can’t wait to find her! Does anyone know where her tummy mummy is? Mia’s search will take her to many places, only to lead her someplace even bigger. A very special story to be read with loved ones, In My Heart, takes us on a child’s journey of discovering who she really is and where she comes from. Warmly illustrated and deeply felt, this is a fearless and tender celebration of the magical ways in which different kinds of families are born.

Title of the book: I Have Become The Tide by Githa Hariharan

Description: Githa Hariharan’s new book takes an intimate look at the system of social oppression that plagues this country. The three narrative strands of Hariharan’s novel are tied together by this common theme, chronicling and tracing a poisonous pattern of bigotry that spans centuries and survives just about anything in between to make it to the 21st century. Hariharan’s book serves as an encouragement, a call for action to a rising tide of rebellion.

Title of the book: Tales from Bengal by Sourish Roy

Description: The compilation comprising nine short stories, all set in Bengal, looks to appeal to the magnanimous aspects of modern minds engrossed in the tussle for a living. The collection is meant to make readers think at least for once about those villagers who still have to wait for an elevation in their wretched living. In addition, set in the backdrop of India still unaware of urbanism and innocent of technological advancement, the stories are sure to reconjure the ideals prevalent in the rural society in the last few decades of the twentieth century.

Title of the book: The Secrets We Keep by Sudeep Nagarkar

Description: On 25th May, acclaimed author Sudeep Nagarkar launched his latest, The Secrets We Keep. A romance between an undercover officer, Rahul, and Akruti, the daughter of the major whose house he is undercover at, the story is about the inevitability of the past colliding with one’s life regardless of how much one tries to escape it. The story weaves a web of secrets, lies and hidden identities.

Title of the book:  Voices of Komagata Maru by Suchetana Chattopadhyay

Description: The Komagata Maru or the Ghadar Movement form an important part of Indian history to provide perspectives on Punjabi Sikh immigrants. The book traces this early wartime clash of positions and the organized postwar transmission of the memory of the Komagata Maru as a symbol of resistance among the Sikh workers in the industrial centers of southwest Bengal.

Where to get it: Get the book here

Title of the book: A.K. Ramanujan’s Journeys: A Poet’s Diary by A.K Ramanujan

Description: A.K Ramanujan over the course of his literary career cemented his place in the bookmarked pages of Indian literature. He is famous for his unique style of writing and this book provides us with a sharper picture on him. It is an engagingly written memoir that is full of candor and honesty. It is equally a scrapbook, notepad, journal, photo album — and most importantly, the book contains facsimiles and drafts of many of his poems and “dreams”.

A Web of Stories

This article takes a critical look at the children’s literature in Goa and the challenges it faces especially since writing for children is no kid stuff!

We bring you details about the latest products that will ease your reading experience.

Amazon launches the latest in its Kindle series.

Amazon’s Kindle (2019) is a game changer in the world of ebook readers. Amazon’s other Kindle products include the basic Kindle at INR 5990 and the PaperWhite at INR 12,999. The new Kindle is cheaper than the Kindle Paperwhite at INR 7990 but incorporates many of its high-end features including the backlit display that lets you read even at night.

It boasts of a 6-inch screen with a pixel density of 167 pixels per inch, 4GB storage space and wifi connectivity. It also has a new feature that allows the Kindle (2019) to connect with Bluetooth devices, such as headphones, which is pivotal for audiobooks or if you like a voice-guided tutorial. This functionality assumes particular importance since the Kindle (2019) neither has its own speaker nor has a 3.5mm jack. All this and it still weighs only 174gm.

The charging time remains the same and lasts weeks similar to its predecessors. But at INR 7,999 the new Kindle is an absolute steal providing one with features that were earlier limited to the more high-end e-book readers.

Get your hands on one now.