In Conversation with: Manu S P.. 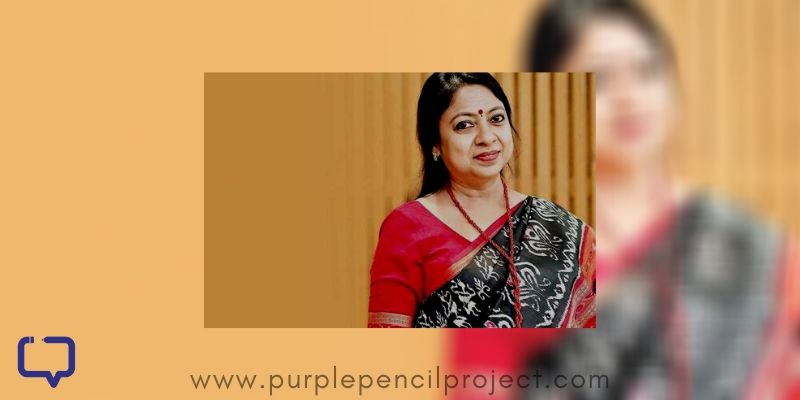 Paramita Satpathy is among the most renowned modern fiction writers in Odia. In her career spanning three decades, she has carved out a niche for herself with seven short-story collections and three novels, including Jhankar, Kurei Phula, Prapti, Apathacharini, and Door Ke Pahad. Several of her works have been translated into books in Hindi and English.

Her most recently translated collection is ‘Colours of Loneliness’, translated by Snehaprava Das. This work is a collection of 14 short stories written by her that have been selected from four different Odia books to depict the range and diversity of her creative output.

Paramita is also civil servant and presently works as Commissioner of Income Tax in New Delhi.

How have your parents – your mom a poet and your father a litterateur – influenced you as a writer?

Paramita Satpathy: As you have said I have been brought up in a writers’ family, I was surrounded with books all through my childhood and believed that books were the most valuable treasure for any human being.

My father had a huge library and I was privileged to get to read great literature of my language and of the world at a very early age. My mother being a poet influenced me and ushered me to write.

I had started writing from a very tender age. Both my parents loved to read what I wrote. In fact over time, my mother has been the first reader of any piece I wrote. My parents were very involved with and committed to literature. My mother often said to me:

No matter what you do, wherever you go, don’t give up writing. For creativity will be your unfailing friend walking with in you through all roughs in life.

I remember it every day.

For the uninitiated, could you introduce Odia Literature and its history? What authors and books would you recommend to anyone wanting to get better acquainted with Odia Literature?

Paramita Satpathy: Odia has been recognized as classical language. It has a rich heritage as far as literature is concerned.

Our Adikabi Jagannath Das has written ‘Bhagabata’ in his own unique rhythmic style.

The much acclaimed poet Sarala Das had written ‘MahaBharata’ in a very lucid manner imbibing his imagination and deviating from what was there in the original text. His work is very artistic, convincing, creative and imaginative.

The founder of Odia modern fiction Sh. Fakir Mohan Serapati is a must read for his varied themes, style and coinage of words. We have many poets, story, novel writers who have enriched Odia literature with their invaluable contribution.

What authors did you grow up reading? Apart from Odia and English, do you read in any other languages?

Paramita Satpathy: At a very young age, because of exposure to enormous volumes of books in our library; I got to read almost all the significant writers of my language. Besides I had read Indian literature in translation and the choicest of world literature. I am ashamed to admit that I cannot read any other language besides Odia and English. I try to read Hindi to some extent.

You have a very rich literary heritage and come from a family of established writers. But you are the commissioner of the Income Tax Department. How did you foray into the Indian Revenue Service?

As I have already stated books have been my constant companions since childhood. I grew up with the belief that writers are the most important persons in the world.

I was good at studies too. Everyone around me at that time were set for Civil Services when I was a student in JNU, Delhi. I too followed the trend.

I landed up with a job in the Indian Revenue Service. But I also admit with sadness that writers in Indian languages are still not being adequately paid so that they could give up their other livelihood for writing, though in some languages like Malyalam and Bangla, it has been possible.

Because of being in a demanding job, at times I feel pressurized for time to write but then my exposure to the world through my profession has also opened up certain creative faculties in me.

What can be done to increase the readership of Odia works? Translation helps, but is it enough? What does the current literary scene in Odia look like?

Paramita Satpathy: This is a very pertinent question and has constantly been there at the back of our minds. As such there has been a decrease in attraction towards literature in Indian languages.

I guess great deal of public participation, advertisements regarding books, their contents and library facilities are required to augment interest in readers. Moreover, in the homes and schools also there should be adequate emphasis on reading good works written in the mother tongue. This habit should be inculcated in children from a younger age.

You write short stories, novels, and poetry. How do you switch your writing style for each format? Which format do you enjoy writing and reading?

Paramita Satpathy: I do not know whether I consciously switched to different genres of writing. Sometimes I feel an urge to express an event or my feelings in a very crisp manner, so I weave a story around the plot.

Some events have compelled me to stretch my imagination and transform them into novels. Poems are to me as surge of emotions, which come to me in stanzas and I write them down. It has been like this for me. I enjoy writing stories the most though, and enjoy the refreshed feeling of completing one.

I like reading novels and stories written in all languages, and always create a special mood to read and savour poems.

You write in both Odia and English. Would you consider translating your own works, or another Odia writer’s works?

Paramita Satpathy: Yes, I have translated some Odia work into English and some work of English to Odia. At present I am translating my novel in Odia Maya Purush into English, the title is Illusion Man.

You have also penned many feminist themed stories. Which are the female writers you look up to as your literary idols?

Paramita Satpathy: Oh, I have devoured many such beautiful work of great authors.

To name a few I would like to mention Binapani Mohanty, Prativa Ray and Prativa Satpathy (my mother) in Odia.

All these writers have illumined my imagination and stretched my vision in a substantial manner.