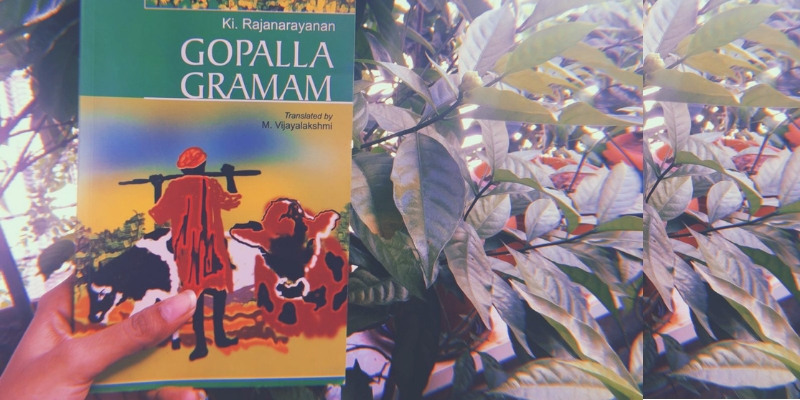 Rich in traditions, natural beauty, and purity, life in the villages of India is rustic and fulfilling. Ki. Rajanarayanan’s Gopalla Gramam transports the reader to the serenity of life in his village, complete with a beautifully vivid description of the surrounding greenery and the people that make up the village.

Ki. Rajanarayanan is a pioneer of the oral tradition of story-telling, his words expertly layered with cultural elements predominantly Indian and moreover, pastoral in their symbolism. His writing provides a voice to the overlooked, simple people of India and so he established a dialectal oeuvre of what came to be known as karisal (scorched, drought-stricken) literature.

The novel comprises of the story of a single family in a Tamil village, the Kottaiyars. But the writer’s expertise lies in his usage of multiple perspectives told through an omniscient narrator all of which tie together as the collective experience of a people.

The dominant element in the novel is the strife and beauty that makes up the life of people in pastoral areas. Their relationship with nature makes up the two sides of a coin – on the one hand, they worship and thrive on the gifts of nature and on the other, they must struggle to till an unyielding land and sometimes go hungry when nature fails them.

Rajanarayanan captures the sense of community that all villages seem to possess, bound together by traditions, superstitions, and style of worship. Many of them have a common deity, celebrate the same festivals and share their fortunes and misfortunes. Their unwavering belief in the goddess Pottiyamman forms an important theme in the novel as they turn to her for every miniscule concern.

Their daily lives seem banal and monotonous to a city dweller in the beginning, with the description provided by the writer in the first chapter,

“The village woke up, stretching, warding off the last vestiges of sleep. A number of sounds blended, with elders waking up younger ones in kind but firm tones, against loving protests.”

But these people lead, systematic, fulfilling lives, they are satisfied with their lot in ways that city dwellers always find themselves wanting.

The pastoral life, although seemingly leisurely and uncomplicated, has its own systems of hierarchy. Divided on the basis of their occupations, the society of Rajanarayanan’s village is headed by the Kottaiyar family and their experiences form the essence of the story. The character of Akkayya seems the most three dimensional in the story – his tales of humour and pranks, including the one he plays on the robbers who try loot the village are scattered throughout the book.

The trials faced by the characters of Gopalla Gramam play an important role in shaping them and the village and sanctuary they create for themselves. There are references to two different centuries, one where the Mughals invaded the country and two when the British established their Company. The novel has amalgamated the experiences of people from both of these times to create a fluid narrative. The story of the Kottaiyars, who escaped the clutches of the Mughal tyrants and their establishment of a village in a far away land is a testament to their robust and determined nature.

The people of the village, especially Akkayya, are self-sufficient and creative in their dealing of problems they encounter. They even find a way to trick the British invaders away from their land even if temporary by placing neem leaves all around to create the illusion of a smallpox infested village.

But their resilience shines through mainly towards the end of the novel, the brewing rebellion against their white invaders is a promise of the fight that is to come.

Gopalla Gramam was succeeded by a more sporadically structured sequel Gopallapurathu Makkal. Given the style of Ki. Rajanarayanan’s style of writing, I imagine it might also be an interesting read. M. Vijayalakshmi’s translation of the Tamil novel to English does justice to the essence of the story.

As days passed, this faith got destroyed, little by little. The white man’s government was unable to sense the people’s longing for freedom – in that village and in the land where it was – a longing akin to the fire glowing under a veil of ash. None realized that it was the calm before the storm.

Final Verdict: 3.5/5. Overall an interesting read. Get the book here.

Recommended For: An interesting summer read if you are visiting a native place or a village during your break.