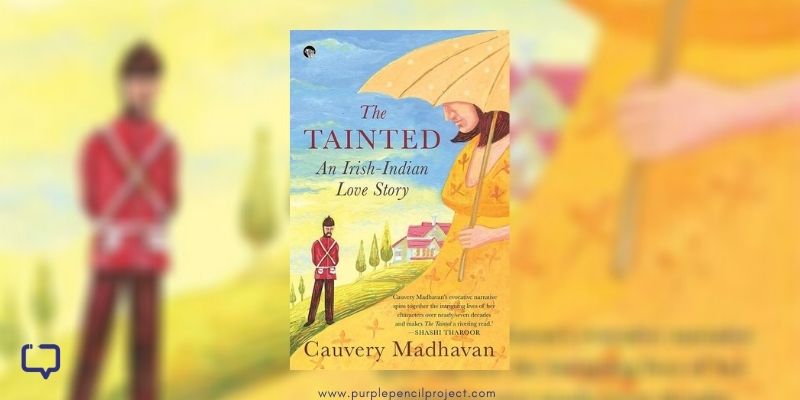 Set in India between the years 1920 to 1982, The Tainted by Cauvery Madhavan is the story of the Irish Connaught Rangers and it traces the lives of the Anglo-Indian community. It’s a picture of post-colonial India entwined with a bittersweet romance in the background, foregrounded by questions of identity, belongingness, and family.

Divided into two parts, The Tainted focuses on the interaction between two families – the Twomeys and the Alymers. The first half is an account of Nandagari, a small Indian town, in 1920. The reader is introduced to Sean Twomey and his daughter, Rose, who was educated by nuns. Rose abandons her Indian identity in a quest to be treated as an Irish citizen. Eventually, she falls in love with a young soldier named Michael Flaherty, an Irish soldier of the Kilgore Rangers. Rose is hired by an Irish Colonel to look after his wife and her child. In the second half of the book, the reader meets Gerry and May Twomey. The story is set in the year 1982, where the reader is now looking at post-colonial India, through the eyes of Richard Aylmer, the Colonel’s grandson.

The novel uses interesting narrative techniques to bind the reader to the book. There is the interior monologue, presented via the first-person diary entry narration. These inner musings give a sort of authenticity to the story and make it much more interesting for the reader.

Can the tainted-ness of the past suddenly leap into the present and change everything? Is it possible for the past to taint the future as well? The reader seems to be asking these questions to themselves repeatedly, and will possibly find answers as they read along.

The political friction between both the families continuously shapes and fuels the novel for most of the second part, in different and unexpected ways. The Tainted is all about showing how the characters’ clandestine secrets can leap to surface at unexpected moments, despite their effort to keep them hidden. There is a constant desire of the characters to explore their pasts further and further, in an effort to enrich their present and future lives.

This need to explore the past brings each character in direct confrontation with the themes of identity and belongingness, which weaves a layer of complexity into the narrative. It is evident through characters like Richard Alymer who is “still Anglo-Irish. Not Irish enough yet”. May is an Anglo-Indian like her ancestor Rose, and she tells Richard, “They descended from mixed-race liaisons dating back to the days of the Raj…authorities believed that abstinence was dangerous, especially for soldiers and there are plenty of Anglo-Indian offspring who are the result of that belief”. Mixed blood then becomes something problematic and unacceptable, something that could lead one to be socially boycotted.

Patriarchy and its tightening grip

Discussions on the effect of colonial power have always been doubly complicated for women than for men. For women have faced a double the amount of suppression – first from patriarchy and then from the colonial power. The reader notices the omnipresence of themes like oppression, repression and cultural intolerance, going hand in hand with patriarchy. The ideas of class and caste have also been explored, of both the societies in India and Ireland.

The Tainted hence becomes a reflection of one’s tainted blood, of a tainted past and of tainted relationships, the burden of which a person has to carry forever. It is not only a beautifully executed historical fiction but also bears relevance to the epoch we live in presently. The only down-side of the novel was that at times it seemed to be getting too stretchy, partly monotonous, which could have used some better editing

“We’re tainted – we were never white enough then and will never be brown enough now.”