The White Castle by Orhan Pamuk (Tr. to Tamil by G...

The White Castle by Orhan Pamuk (Tr. to Tamil by G. Kuppuswamy) 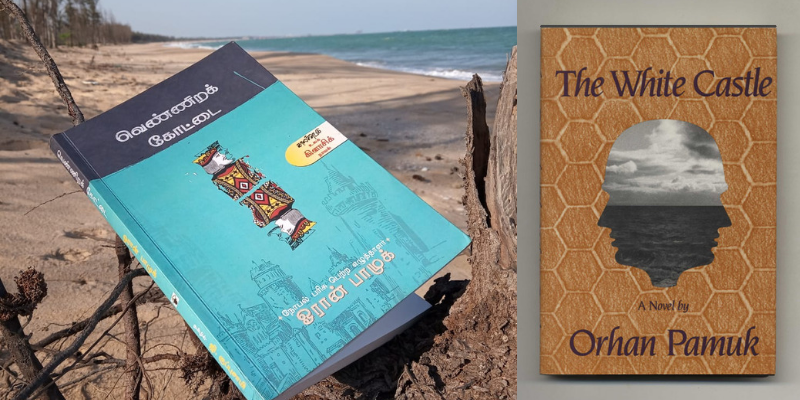 We live in a planet of over 7 billion people, spread across geographies. We are all told this; somewhere out there, there are seven people who look exactly like you. This is a popular notion. In folklore, a doppelganger is considered as a paranormal entity, or a harbinger of misfortunes. Meeting one is considered an omen.

In reality though, the chances of meeting one are nigh improbable, unless of course, you have an identical twin. This little practically does not come in the way for authors and the likes of Fyodor Dostoevsky to Patricia Highsmith have given us some unforgettable tales, where doppelganger protagonists confuse the readers, always keeping us guessing. This fascination continues with Orhan Pamuk.

I have always cherished and devoured books written in or translated to English, my adopted mother tongue, increasingly the dominant language on my to-be-read pile of book. A sense of guilt came over me when I looked at the significantly smaller pile of books I have read, written in Tamil, the language that I proudly call my mother-tongue. There was not a single translated work in that dismal list which made matters worse.

I wanted to change that this year and I zeroed in on Turkish author and Nobel laureate Orhan Pamuk’s Beyaz Kale (in Turkish) or The White Castle (in English), translated by G. Kuppuswamy and published by Kaalachuvadu Publications. The Tamil version has been translated from Victoria Holbrook’s English translation. To me, reading translations is an act of faith for me as they take me into uncharted waters, introducing me to new landscapes, cultures, and characters, read in my tongue, which makes me leave behind the comfort of my literary shores.

A meticulous and thoughtful cover designed by Seenivasan Natrajan welcomes us with a Jack of Spades, or knaves, at the center on a relative teal background sprinkled with the silhouette of a castle and the title of the book is in pristine white at the top. The underlying theme of the book about confused identities is neatly portrayed with a bearded knave at the top and a clean shaved knave at the bottom but their shadows are mirrored giving the reader a glimpse at what they they are about to encounter in this 175-page-slim novel.

Once upon a time…

The White Castle begins with a subtle misdirection. The preface is written by Faruk Darvinoglu, an out-of-work professor and encyclopedia-ist, and dedicates the book to his late sister Nilgun Darvinoglu and speaks about a manuscript he found in 1982 at the archives attached to the Governor’s Office in Gebze, titled ‘The Quilter’s Stepson’. When all his steps to track the author of the manuscript go in vain, he decides to publish the story of the manuscript himself; this is the manuscript we are about to read, divided into 11 chapters. But towards end of the preface to the surprise of the readers, Faruk writes,

“Readers seeing the dedication at the beginning may ask if it has a personal significance. I suppose that to see everything as connected with everything else is the addiction of our time. It is because I too have succumbed to this disease that I publish this tale.”

The reader may not immediately recognise Faruk Darvingolu, who happens to be one of the narrators of Orhan Pamuk’s second book ‘The Silence House’, released in 1983. And that’s when the reader realizes that the fabrication of text is interspersed early, even before the tale begins, reminding that we are venturing into a murky territory.

The story takes place in the 17th century Ottoman Empire. The narrator, an Italian sailing from Venice to Naples, is captured by the Turkish fleet and taken as a slave to Istanbul. He claims to be a doctor and gain some preferential treatment from the guards after he cures the Pasha of breathing ailments. The Pasha commissions the Italian to work on the fireworks show for his son’s wedding and orders him to assist Hoja, the narrator’s doppelganger. After the splendid success of the fireworks display, the narrator is offered freedom if he accepts to convert to Islam, to which refuses. The Pasha then gives him as a slave to Hoja (meaning “master” in Turkish).

Hoja, desperate to climb the ladder of the bureaucracy to become elite, insists that the narrator teach him everything he had learnt. Hoja is steadfast in trying to impress the young Sultan with what the narrator teaches him and convince the Sultan to modernize the Ottoman Empire. Hoja taunts the narrator into sharing scientific and personal information and despises him for his misdeeds. The Italian is shocked at how much Hoja knows about his past and how well he adopts his mannerisms, that he begins to fear about his loss of identity.

A bubonic plague breaks out in the country and Hoja, with the help of the narrator devises a plan to eliminate the contagious disease. They succeed and Hoja is made the Imperial Astrologer by the Sultan. He impresses the Sultan by interpreting his dreams, regales him with instincts of animals and the wonders of science and technology. Hoja then works on a gargantuan weapon of mass destruction for six years which would intimidate even the bravest men while the Italian befriends the Sultan. The weapon gets ready in time for the attack on the Poles to capture the eponymous white castle, ‘The Castle of Doppio’.  The weapon is taken to Edirne across the Danube with great effort earning the scorns of the soldier who curse both Hoja and the narrator. The weapon flounders in the swamp and the Poles get reinforcement forcing them (Hoja and the narrator) to switch places. What happens aftermath the failure at Edirne and who fled the battlefield forms the remaining of the book.

A narrator who is in his seventies blathers about his life at Gebze after he resigned as the Imperial Astrologer, with his wife and two children. He ponders about “Him” and “his life“and decides to record the events of his life, when a traveller inspires him to do so. The story ends with the narrator looking over the confused traveller who is shocked after reading the narrator’s diary.

The game of thrones

The writing is ruminative with the nub of the tale revolving around the sublime mind games of the two doppelgangers. Hoja is obsessive in his pursuit to modernize the Ottoman Empire, loathes the prejudiced, backward countrymen and administrators, manipulates to become the Imperial Astrologer of the Palace and is mean to his captive, always spooking and taunting him.

The Italian on the other hand aids Hoja in his pursuits with the desire for freedom and goes counter offensive, by invoking the fear of imminent death in his master’s mind. He escapes to an island when he no longer can withstand Hoja’s arrogant taunts yet feels safe when he is captured and brought back. He develops a bizarre affinity for him, yearning for his brotherly acts, showing symptoms of Stockholm syndrome.

When the Italian points out Hoja’s faults, he denies the narrator’s feedback and begins loathing ‘them’. At one stage he even contemplates, given the knowledge about each other’s intimate secrets, he could even exchange his identity with the narrator. The writing is such that the reader is caught in a complex literary trap unable to wake up from this tale of delusion.

It’s surprising to note that Hoja’s thoughts of revulsion over his culture, heritage and countrymen, which is explicitly critical of the Ottoman surpassed the prying eyes of the censors when the book was released in 1985 when censorship was common. The plot also seems to be an allegory to the geographical location of Turkey sandwiched between Europe and Asia, overcoming the waters of the Bosporus Straits to stay connected, and also to the geopolitical aspirations of Turkey where it was founded as a country with secular aspirations mirroring the West, but seems to have abandoned the values under which it was established.  This reminds a quote in Elif Shafak’s ‘The Bastard of Istanbul’ book:

“We should all line up along the Bosphorus Bridge and puff as hard as we can to shove this city in the direction of the west.  If that doesn’t work, we try the other way, see if we can veer to the east. It’s no good to be in between. International Politics doesn’t appreciate ambiguity.”

The setting is sometimes unsettling sending us in circles of repetition over the interaction between the doppelgangers, making us feel claustrophobic and hazy.

Kuppuswamy’s stellar translation allows Orhan Pamuk’s brilliance to shine through and not to forget Victoria Holbrook’s own efforts, which keep the language simple so that the confusions of the plot take centre stage. Even though such a plot set in a bewitching city like Istanbul and striding through the waters of the Bosporus, with most of it set in the triangle of Golden Horn, there are no glowing descriptions about these landscapes other than that of the titular white castle ‘Doppio’.

The landscape doesn’t evince any emotions and remains mundane till the end. The act of exchanging identities seems inevitable from the inception, when the Italian first meets Hoja, but Pamuk concludes with a stellar ending where the lines between reality and fiction start to blur, thus confusing and frustrating the reader. The narrator maintains the illusion, shrouding the trading of identities deep inside his hearts and ponders over “Him”. He even begins to refer his counterpart who has fled the battlefield as “He” and “Him” that ultimately doubts whether his past was real or an illusion in his head. The delusion is then shifted to the reader as we get the feeling of being lost in a story where we don’t know who is whom anymore. Is the character “He’ – Hoja or the Italian? Is the narrator making up ‘He’ to the travellers and the readers?

Who is the narrator?

As we return to the pages of the story searching for the elusive answers to our nagging questions, one couldn’t but remember these beautiful lines from the book,

“The ideal story should begin innocently like a fairy tale, be frightening like a nightmare in the middle and conclude sadly like a love story ending in separation”.

And true to this quote, Pamuk’s inception of the tale has a fairy tale beginning with these lines,

“We were sailing from Venice to Naples when the Turkish fleet appeared. We were caught in a violent broadside volley – our ship would surely sink if we did not give up at once – we decided to raise the flag of surrender.”

Final Verdict: (3.5 / 5) Definitely buy the book paying those extra bucks and place it proudly in your shelves. If you cannot, buy it online here.

Recommended for: Those who haven’t read Orhan Pamuk yet or Turkish writings, also those who enjoy reading about mind games

“But we should search for the strange and surprising in the world, not within ourselves! To search within, to think so long and hard about our own selves, would only make us unhappy. This is what had happened to the characters in my story: for this reason heroes could never tolerate being themselves, for this reason they always wanted to be someone else.”