Mythology re-read in The Palac..

How Bookstagram Has Affected My Reading

How Bookstagram Has Affected My Reading 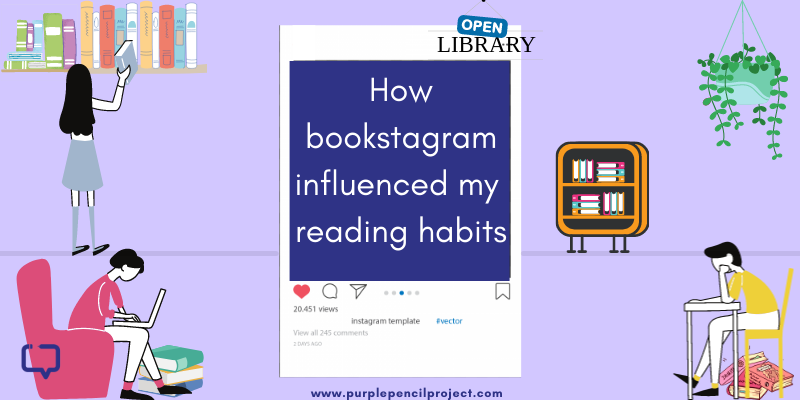 #Bookstagram happens to be one of the most dedicated communities to reading and books. It is that corner of social media which book nerds, readers, booklovers and book hoarders are known to frequent. I joined the bookstagram bandwagon almost two years ago and have been an avid member of the community ever since. And looking back over that period, I find that my reading patterns and book choices have been affected by the platform in multiple ways.

First of all, bookstagram has brought me in touch with people to whom I can talk and obsess about books – incessantly. This also means that even as I read a book, I can be sure that I will find someone who has either read it or is doing so at the same time. This has often led to discussions over a certain book or its various aspects, helping me read with a broader perspective and re-iterating time and again that my worldview isn’t necessarily that of every other reader.

My first buddy-reading comes to mind, where I read Eva Luna, written by Isabel Allende with Dhanya and Anupama. I was new to Luna’s works and reading it together, with inputs from my two reading partners helped me discover those layers/aspects which I would have otherwise glossed over. It is also always fascinating to see how different people will focus on different aspects of the book or how the same aspect can rub people off in different ways. Recently, for example, I came across a bookstagrammer who disliked a memoir because it felt unedited and “like a diary” to her. For me, though, it was the rawness and unedited-ness of the book that touched me.

Bookstagram has also affected my book choices and opened new worlds for me in terms of new titles. Before I joined the community, I didn’t know the sheer depth and breadth of Indian writers and their works. I had read just a few and was blissfully unaware of the richness of the writing offered by my own country. My initial introduction to Indian writers was through Ruskin Bond and R K Narayan, writers which I had read as a kid and which also featured predominantly in my reading syllabi in college.

Interacting with fellow book lovers hailing from different parts of the country like Kerala, Tamil Nadu, Manipur, Bengal, Gujarat and Assam has given me a glimpse into the vast arena of great writings originating from the different parts of this huge country. Be it the writers from the North-Eastern region like Easterine Kire, Janice Pariat or Mitra Phukan or be it writers from the Konkan region such as Mahabaleshwar Sail and Vimala Devi, I have discovered that there is a lot in Indian writing that I need to read.

Related to this is the fact that it has also provided me a space for a niche reading. I am an avid fan of the mystery and thriller genre and being on bookstagram – where there are pages devoted to only these kinds of books (Abbi @crimebythebook is the first to come to mind, besides pages devoted to Agatha Christie like @officialagathachristie) – has helped me indulge in the best books that come out in the genre. And because bookstagram goes beyond geographical boundaries, I learn of international writers as well as books which I might have otherwise missed.

Another aspect of #bookstagram is that it offers me a sneak peek in the life of writers with an account on the platform. Writers like Ruskin Bond, Jahnavi Barua, Matt Haig and many others are users of the platform and reading their posts about books, writing or aspects of their lives can be a wonderful feeling. While it does bring the added caution of being mindful (so far, that has not changed my review), it adds a personal connection which inspires me to read more of their work.

At the same time, it has also introduced me to many book festivals and book awards and detailed information about (at times controversial) aspects of the writing and publishing industry that I wouldn’t have been aware of otherwise.

The controversy on the publication of American Dirt or the charges on My Dark Vanessa being influenced by a non-fiction work would have probably skipped my notice had I not been a part of this community, This means that I am more aware of the long-lists and short-lists of various prizes, that I know of writers whose works I hadn’t read so far as well as the fact that book prizes can also become sites of controversy and questioning (the Booker award of last year comes to mind!). This has made me more aware and more careful in choosing the titles I am reading or planning to read.

But, like everything else, bookstagram has its flipside too. For one, I have now become an avid book-buyer and turned into the kind of a reader who is more willing to buy physical copies over e-books for the only reason that physical copies make better photographs.

At times I feel overwhelmed by the sheer number of books that I have in my tbr list and a mixture of sadness and guilt creeps up to me. And because I cannot read all, I filter them based on reviews by other readers – which means that I can sometimes miss a book that I might have loved because some readers whose reviews I follow didn’t like it. And because bookstagram is – essentially – social media, I have to confess that I have felt being bogged down by the pressure of likes, followers, comments and shares. This pressure has sometimes affected my reading too and made me question if I am a “good enough” reader.

I love this corner of the world though. I love popping in and out of here and being part of a community that couldn’t have existed out of bookstagram. Before I joined #bookstagram, i was a lonely reader. I longed to discuss book with like-minded people but unfortunately, it was difficult to find readers who read the kind of books I did in the world around me. Bookstagram has surely changed that, blurring state and national boundaries effortlessly.. Needless to say, I am a proud #bookstagrammer!