In Conversation With: Ranjita .. 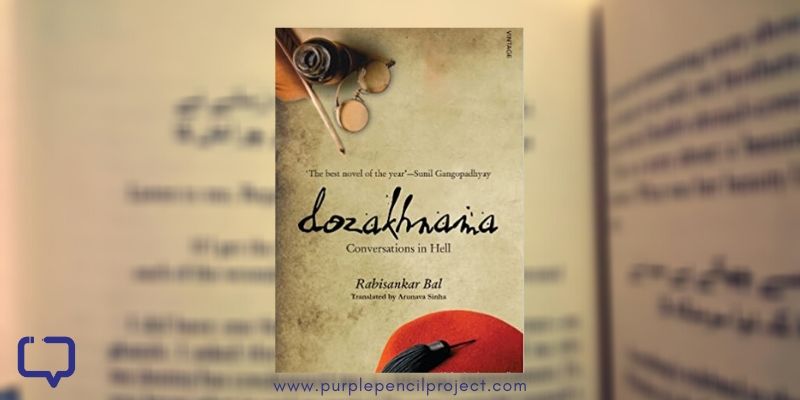 Lying in their respective graves, Ghalib and Manto have a conversation, a conversation that smells of petrichor emanating from the freshly bathed soil, like a work of art at the back of muslin.

Dozakhnama begins with a journalist who is handed a manuscript, by a deranged man who is haunted by its stories, during his stay at Lucknow. The manuscript written in Urdu turns out to be a novel written by Sadaat Hassan Manto. Since the journalist is cannot read Urdu but is mistyfied by the poetic fervor of the language, he takes it to a translator in Calcutta, and there begins a ballad warped in splendor and magnifique (that the cover promises).

There is a dreadfully-surreal atmosphere that borders Dozakhnama; neither were Manto and Ghalib contemporaries, nor was there a chance of them meeting each other. One is lying in Delhi, the other is in Lahore, two sides of an abhorred barbed wire.

The book, in the brooding atmosphere it builds, anchors the reader, away from the thunderstorms of life, away from the feeling of being lost, and into finding joy in the little things again – friendly banters, the rustlings of leaves, mellowed sunsets.

“I wrote about my love, my Ishq, on bloodstained paper day after day, Manto Bhai, my hand became numb, but still I wrote. I knew my ghazals would provide comfort to many people one day.”

Ghalib’s words flow like the adoring tranquility of Yamuna and standing in opposition to the quiescence of grotesque ideals of Shahjahanabad.

On the other hand, Manto’s stories are the rhapsody composed of sand dunes of a forgotten time in Bombay, where he believed he could hear the city breathing, he felt its pulse the ignominious situational discomfort of Hiramandi stung his soul.

The homogeneity and the passivity made him detest almost all his contemporaries, except Ismat. There is a section where Ismat Chugtai in her sly banter tells Manto, “What a third-class love story miyah.” To this Manto retorts,

“What would have I done Ismat? What would have made you happy? If I would have slept with Begum and left her pregnant with my child, is that it? Then the love story would have been a brilliant one right? Then I could boastfully say there is no man like me, in this world. Did you want to see me like that, Ismat?”

The financial crisis, from women to alcoholism, has torn Ghalib and Manto apart. However, these two have been caught in the midst of a storm evoked by the barbarians not only for pleasure but also for the qisse and love.

After the sepoy revolt of 1857, the pomp of the Delhi royal court was extinguished and Ghalib witnessed the fall of Delhi with his own eyes. He survived the long-lasting perilous situation by clinging a stone to his heart. While Manto has carried the wounds of Partition. He has painted the picture of those relentless scars which he had witnessed over the years.

The principle philosophical notion of Sufism is reiterated in the very fact where with every page our souls stay fastened to a warm swing whenever the heart breeze in content and when the mind takes a stroll into the sprawling magical world. All in all this remarkable novel has won the Bankim Award in West Bengal. Dozakhnama is a must-read for all the readers.

Somudranil Sarkar is a freelance editor and translator based in Kolkata. A postgraduate in English language and literature he tends to meddle in between the esoteric and the unexplored itinerary. Apart from writing, he has been trained in theatre and had been a practitioner himself for over 18 years.