There’s Gunpowder in the Air b..

The Queen of Jasmine Country by Sharanya Manivanna...

The Queen of Jasmine Country by Sharanya Manivannan 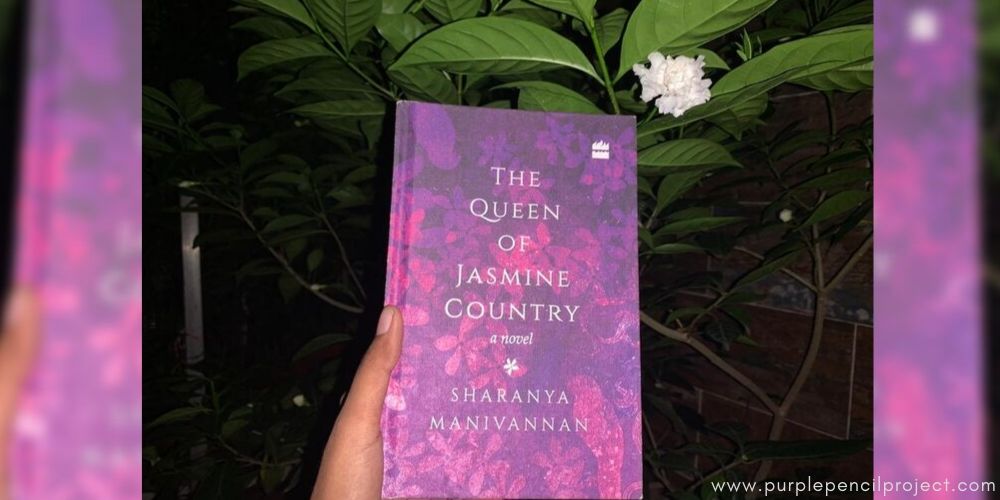 If there was one way to describe the frailty and beauty of the Queen of Jasmine Country, it would be to compare it to its thematic namesake, the jasmine flower that blooms momentarily but leaves a precious fragrance, even in its wake. Sharanya Manivvanan beautifully weaves a tale of adolescent woes, longing for love and the richness of pastoral life through the story of young Kodhai.

Like most young girls her age, Kodhai too dreams of an all-consuming love but unlike them, the man who has stolen her heart is everything but ordinary and that makes her unique in rural Puduvai, Tamil Nadu.

Kodhai’s origin is as magical as it is mysterious. Her adoptive parents find her in a grove of tulsi plants, freshly abandoned by someone (a dark, mysterious figure she never crosses paths with again) and somehow still protected by the spirits of the forest. It is this connection with the nature near her home that draws her to it every single day.

We are told that Kodhai’s love for her father’s favoured deity, Maha Vishnu, originates in her childhood, when she first put a garland meant for the deity around her own neck, envisioning herself as his bride.

Her father fosters this faith of hers, equipping her with the knowledge of scriptures and the art of writing that enables her to compose poems dedicated to her love for her God.

Kodhai’s new reputation as a poetess garners much intrigue in the village folk as does her dedication to Lord Vishnu but it is her fate that leaves both the people as well as the reader puzzled.

One wouldn’t expect a young woman in the 9th century to shatter stereotypes of gender the way Kodhai does. Imbibing her parents’ example, she makes up her mind to seek out her own love story instead of being bogged down by societal expectations of an arranged marriage. She does so by taking charge of her fate and remaining resolute in her decision to marry Lord Vishnu.

She takes up the pawai  along with other young cowherds when she learns of the story behind it, foregoing the many small pleasures that would hold much importance to a young girl her age. Kodhai is also well-read, a feat that was rare and frowned upon in her time. Not only has she been exposed to the Vedas and scriptures but she has also inherited the art of poetry from her father who is a famed poet in the court of the Chola king.

“It was Amma’s tale that I loved the most. ‘Because my belly could not hold a baby, the garden absorbed my tears. The garden is my heart. That’s where you were born.'”

The dominant theme of the Queen of Jasmine Country is the beauty of pastoral living – Manivannan exercises her rights as an artist and infuses the tale with a rich imagination to weave together a story that transports us to ninth-century Tamil Nadu. Kodhai’s bond with nature is so intrinsic and buried so deep in her heart, that we see the fauna around her grow along with her.

Kodhai is a daughter of the earth in the truest sense of the word and she constantly finds herself drawn to it. She spends a lot of time wandering, exploring and often sneaking out in the middle of the night to spend time where she is most comfortable, in nature’s lap, away from the hustle-bustle of civilization.

There is also gentle importance placed on the daily regimen of village folk who tend to their animals and fields. Manivannan is appreciative of the customs and festivals that are a part of village life, rich and vivid in her description of them.

When I had been bathed in turmeric water and dressed in fresh clothes, my eyes lined with collyrium, the guests gathered around me. Huge baskets overflowing with blossoms and vines encircled me and held me at the centre of a consecrated diagram on the earth.”

Kodhai’s story is a testament to the fact that love isn’t always conventional. It is free from governance by societal conventions. Kodhai’s affections for her favored deity extend beyond the normal. Instead of just being a devotee of Lord Vishnu, she envisions herself as his bride. Her dedication towards her love is strong enough for her to renounce all worldly pleasures that would otherwise hold much importance to a girl her age.

Kothai also perseveres through many uncertainties and doubts about the possibility of her dreams coming to fruition but continues to soldier through them and emerges victorious. Her unconditional love bears fruit and she is immortalied in the pages of history.

While Manivannan’s Kodhai in the Queen of Jasmine Country bears resemblance to a character from Tamil literature, a cowherd named Andal who was Lord Vishnu’s human consort, there is something alluring about the rebellious young girl who forged her own path in a time where women barely had any rights. Overall, the book is a pretty interesting read and Manivannan’s writing lulls one into the beautiful backdrop of ninth century Puduvai.

Final Verdict: 4.5/5. A wonderful weekend read that serves as an escape from reality. Buy it here.

Recommended For: Perfect for lovers of intricate, symbolic fiction. If you want to read more about Tamil literature, check out our website.