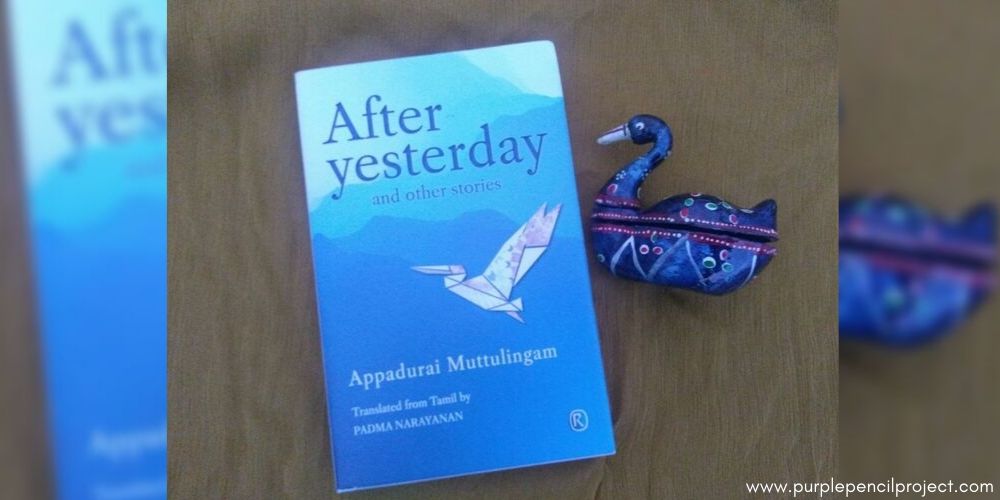 Written by Appadurai Muttulingam, Translated from Tamil by Padma Narayanan.

Appadurai  Muttulingam’s After Yesterday and other stories reminded me of another anthology of short stories in Tamil I read recently – In a Forest, a Deer by Ambai,  translated by Lakshmi Holmstrom, where the author’s note states – “One writes because the act of writing has become as close to one as breathing. It is difficult to stop”.  This quality reflects clearly in this book.

Muttulingam’s works in Tamil have received critical acclaim both in India and Sri Lanka. Born in Kokkuvil, Jaffna; 18 years of work as a qualified chartered accountant took him to various countries in Africa and Asia, allowing an ensemble of his experiences across the globe to trickle into his works.

His first collection of short stories Akka, though published in 1964, he actively resumed writing in 1995. His language is simple, his stories are not written to please anyone or with an intent to provide a message, no single underlying theme that knits them all. His observations on human life are astute, love for home and homeland definite and a longing for freedom and security clear.

The 19 stories in this book offer a complete miscellany to the reader. There is wit, humor and mild sarcasm in some, sheer poignance in others.

In the opening story, Unexpected, the author narrates an interesting and unforgettable episode in Sierra Leone when he arrives just a few years after the country’s independence from the British rule. He beautifully blends his observations in the new land with experiences from his homeland.

The Witch’s sister and The Refugee Girl deal with refugees who land up in Canada, live life strictly within a framework of rules only to gradually slide away from its hold.

Gravity Tax and Rat Face are a satire on the government; its taxes, laws, policies and more, with futuristic/dystopian themes. While the former mocks at the fact that the time when gravity will be taxed by the government is not far away, the payment calculation using weight of residents in a house and associated penalty on non payment of dues tickle a funny bone. The latter is largely dystopian, a satirical take on sex change laws in future in the USA.

Use Your Brains and The Five Legged Man draw the inevitable resemblance between a parent and an offspring in ways entirely different. While the former story equates the similarity between mother and daughter who bring home their boyfriends at around the same time to isotopes – elements with same qualities but different weights, The Five Legged Man details the painful journey of a Greek immigrant who arrives in Montreal, Canada with a promise of higher education only to turn a slave for the rest of her life.She learns and pursues only one skill, quite like her own self – righteous father.

The short stories – Bodyguard, Borrow One and Dilemma felt like pages from one’s personal diary. The titular story – After Yesterday speaks about how old people struggle to adapt to a few hefty and many minor changes in lifestyle in a new, far flung land.

Pilgrimage and The Enemy depict how nonchalantly man turns vile and cunning to achieve an objective.

The Girl on the Train, Tomorrow and The American Girl very elegantly sum up life – a whirlwind of few smooth and many rough patches where hope of a better tomorrow and sheer will to survive are tools that smoothen the rough contours until life is well rounded.

Son of a Chameleon – a man flees his homeland burning in civil war, travels around the world working for Turkish mafia only to be detained in Greece after three years of eluding law. As the police decides on the course of punishment, the man smirks at imprudence of these measly beings who uphold law, how they could call only one country of their own while he belonged to the entire world.

The Horoscope – begins as a funny read revolving around baby deliveries, a foldable iron cot, a borrowed time piece to note down the exact time of birth of a child that enables precise evaluation of horoscope but ends as a moving and realistic take on how life is beyond all that can be readily calculated or recorded.

The Good Earth – highlights the yearning for a free land, a small piece of earth that one can cite his own. Seelan reunites with his parents in Canada after handling guns for twenty years in war for his people back in Sri Lanka. Born in Mayiliddi, Yazhpaanam, he escapes Mullivaikkal after war and reaches Canada via Thailand with memories of 7 killings, 4 training camps, 3 full fledged combats, 7 scars, a love affair and a broken wrist watch. Seelan is flabbergasted at the opulence of his parents, their new life marked by curt indifference to strife back home, which stifles him.

Favorite Quote: (The author in the story Unexpected, in response to the question by the postmaster – Why send a talking doll in parcel to Ceylon?)

Friend, ours is a democratic country,  dolls are allowed to speak their mind.

Muttulingam’s stories have no purple prose; the language is simple, sentences terse and the characters are sharply defined. The reading experience is therefore straightforward and mess free.

In Exit West, by Mohsin Hamid, that deals with refugees fleeing war and persecution in their homeland, we read:

That is the way of things, for when we migrate, we murder from our lives those we leave behind.

In some of the stories in this book, a similar pain is perceivable. Refugees and immigrants harbor helplessness in their eyes, they want them to brim with hope of a better and peaceful tomorrow but these only well up with tears, of guilt and remorse of having left behind too many memories that haunt them continuously.

Final Verdict – 3.5* Please grab a copy of this book and explore the many facets of human life, some deeply moving and some brilliantly witty.

Disclaimer: This book was sent to us by the publisher. This has not changed or influenced our review in any way.