By Queerythm: The Queer Librar.. 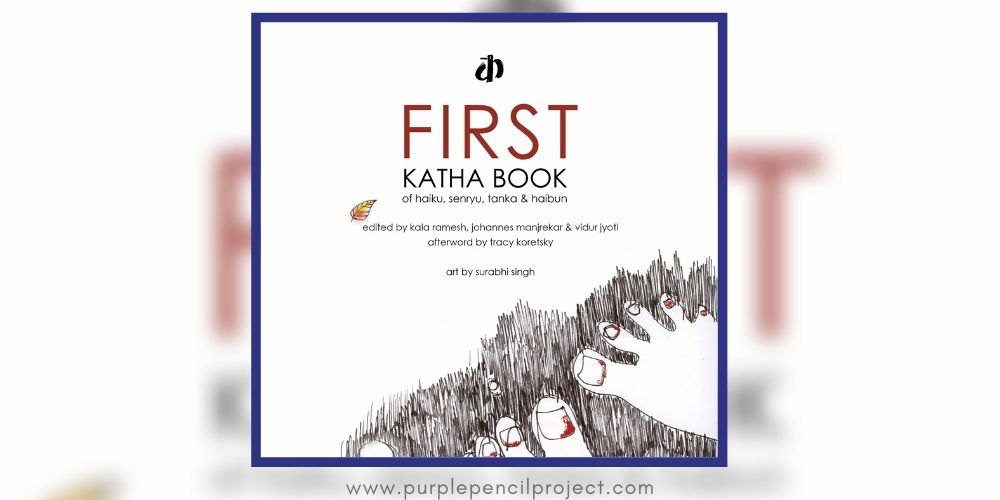 The FIRST Katha Book of Haiku, Senryu, Tanka & Haibun is a collection of 154 poems spanning the four genres, written by 35 poets from diverse backgrounds, bringing an Indian spin to these four hundred year-old Japanese art forms.

Edited by Kala Ramesh, Johannes Manjrekar, Vidur Jyoti, and illustrated by Surabhi Singh, the collection accentuates that which is mundane, and makes it extraordinary.

The anthology is divided into a chapter each for the four genres – Haiku, Senryu, Tanka and Haibun – with a preface and an afterword. Brief definitions to better explain each of these forms have been placed at the end of the book, though would have been better suited before the respective individual sections begin.

In the preface, Editor Kala Ramesh enumerates on the nuances of haikai literature, the use of ancient Indian theories of expression, ‘navarasa’ and ‘abhinaya’ and the subtle style of ‘showing than telling’ that highlight Haiku and other related genres.

High on imagery, the three-lined haiku couplets take you through all the Indian seasons, with a deft economy of words which squeezes the essence of each season on to the page. And rightly so, as ‘the best haiku poems allude to the appropriate season of the year’. Monsoon is the season most written about in this collection.

‘dense fog….
the train evaporates
into a distant horn’

An insightful, thought-provoking metaphor is highlighted in the haiku about Ganesh Chaturthi –

And an apt use of irony, bordering on savage directness, drips from this haiku –

But the haiku that literally stops time, and plays the moment as if for an eternity is this one –

Each haiku captures the underlying emotions of a moment in time with piercing clarity and keen observation, resulting in an immediate impact. These Haiku poetries paint a whole story with a few words.

Also consisting of three-line verses, ‘Unlike haiku, senryu are not reliant on a seasonal or nature reference’. These senryu poems convey the uncomfortable, awkward, never-spoken-about human aspects and experiences. They have a certain odd charm to them, wherein the directness, instead of taking you aback, is welcomed.

Senryu portrays reality with a touch of sensitivity, unlike its raw harshness. A great example of this is the heart wrenching senryu –

Other heartbreaking examples are, ‘orthopaedic clinic’, ‘circus clown’, ‘newly wed dreams’ and ‘morning peace’. The staple diet of all senryu poems is cleverly veiled juxtaposition of the emotions at display.

Tanka are five-line poems, slightly longer than the other two kinds before it. ‘The tanka aesthetic is broad and all-encompassing,’ the definition says. This section covers a range of unrelated topics, which are well-put individually.

These tanka poems can be observed as being high on literary construct. Small nothings written with the impression of a whole life lived, all in five lines, culminate into a moment that seems to hold the entirety of time.

‘laughing
over old stories….
suddenly
I feel that mother
Is young again’

This verse is a classic example of tanka poetry.

Haibun, which can also be called the shortest short story, is the marriage of prose and poetry, a narrative that is descriptive of the subject matter and ends with a haiku or a tanka, the latter giving the overall feel of the scene described. FIRST Katha book informs us that, ‘Each verse (haiku or tanka) should be able to stand on its own as a poem, without repeating what is already in the prose’. Each prose is about the length of a paragraph.

Haibun poems are gripping, offering enhanced imagery with the combination of the two primary forms of literature, like ‘Magisterial’ and ‘Change’. A new format, like that of opening and closing the haibun with a haiku, is seen in, ‘The Threshold’. This format is able to highlight the major setting of the poem like no other.

Here, the poems are about small, inconsequential things, retellings from memory or narrating a present incident as it is happening, but it is the way it is articulated that makes it special. The pieces, ‘Mentor’ and ‘Are You There’ are such examples.

The afterword here is important, especially to those uninitiated in these forms of poetry, and it acts as a crash course in writing these genres. Koretsky’s expert analysis is philosophical in its understanding of Haikai Literature, and is very instructive and informative at the same time. It serves as the best review this collection could have gotten, adding a utility feature to this book.

A pair of feet, half visible, and a single, coloured leaf, as if caught in the wind, give the impression that the person in question is staring at their feet, perhaps contemplating life. The font and colour of the title of the book are fitting and draw immediate attention, just like its contents. An intriguing book cover, for sure.

This glassy lake
of tranquillity…..
sitting at its edge
with one breath
I swallow the universe

It is a light read, carrying heavy interpretations that will transport you into a world beyond. It will have a different effect on different people, depending on how the poetry speaks to them. All the poets in this anthology give the impression that they think in poetry and their language of communicating the same is articulation. If you are a poetry lover looking for something new, this is the book for you. 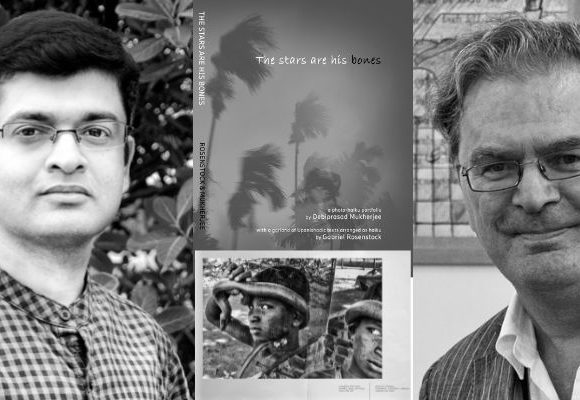 The Stars are His Bones: A photography-haiku book you cannot miss 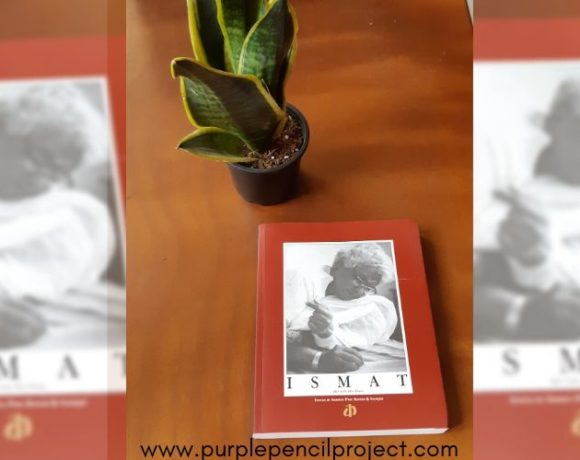