At the tipping point: Megha Ma.. 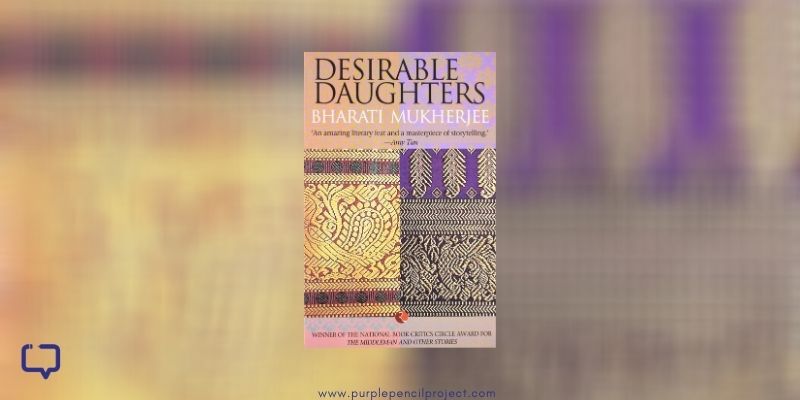 Desirable Daughters by Bharati Mukhejee frequently pops up in lists of Best Indian Books Written in English or Set in America or Books You Should Read if You Love Diaspora Literature. A lot of reviews compared it to The Joy Luck Club. I’d been meaning to pick it up for a while- the blurb spoke about a young Indian woman who undertakes a quest to understand her family’s history and her own identity.

Tara is an Indian woman, living in San Francisco with her son, Rabi, and her Hungarian boyfriend, Andy, when her life is thrown apart by the threat of a family secret being revealed. It forces her to relook at her entire life and family- her childhood and family home in Calcutta, her sisters and the relationships she’s shared with them. It makes her question everything she’s always known about her family and makes her face realities that she’s avoided by being the youngest, being in America. Like many diaspora novels, it presents a conflict between the old and the new, between two different countries, between tradition and modern. Tara is constantly trying to, and indeed forced to, balance her parents’ world, her own and her son’s. The narrative shifts between times and places (starting with the story of the Tree Bride), presenting the confusion within Tara as she never really belongs to any one place or time.

While Tara is an engaging character, one whose story you’re invested in, she’s let down by the plot and the style of writing. It really feels like the author tries to do many things in one novel; she brings up themes of class and caste and patriarchy and homosexuality and marriage and religion and spirituality. It leaves the book more muddled than anything else and becomes difficult to read after the first few chapters of introduction.

And The Things That Do!

What I loved about Desirable Daughters, however, was the long and detailed descriptions of growing up in Calcutta, since I grew up there as well. The relationship between the 3 sisters- Padma, Parvati and Tara, was interesting as well. How well do you really know anyone, the author seems to ask, as she cleverly builds in intrigue and mystery in the sibling bond. Tara keeps wondering if she even knows her sisters at all, as she’s faced by a secret that might tear the family, who have already drifted away, more apart than ever before. I wish Mukherjee had focused only on this aspect of the novel- the secret is thrilling and it would make for a good read if the book didn’t have so many distractions.

The style of Desirable Daughters is breezy and conversational, the descriptions of diaspora life are easy to read and relate to. That’s why the conclusion, the drifting plot and the lack of focus are so much of a letdown- you can’t help but feel that so much more could be achieved with this novel if it had just focused on the sisters and how their relationship changes and evolves with time and distance. When you finally close the book, you’re left disappointed and frustrated, unsure of what exactly the writer wants you to focus on.

We encourage you to buy the book from your local bookstore as far as possible. If not, please use the link above. Thank you.