In Conversation With: Hemant S.. 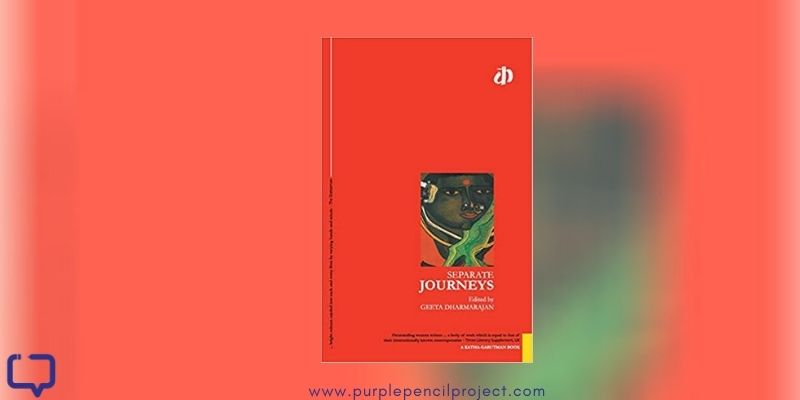 Separate Journeys, the new collection of short stories edited by Geeta Dharmarajan, is earthy and raw in its exploration of womanhood in multiple forms – as mothers, as daughters, as temptresses and sometimes, all at once.

Separate Journeys begins with an exploration of motherhood in ‘Bayen’ by Mahasweta Devi and in ‘A Day With Charulata’ by Anupama Niranjana.

In ‘Bayen’, Devi examines a mother’s love in someone whom others fear, while Charulata looks at a talented writer the way her family sees her – as a wife and a mother. Motherhood also features in ‘The Decision’, by T Janaki Rani and ‘The Hijra’ by Kamala Das, where new mothers are forced to make the heartbreaking decision to say goodbye to their newborn children.  In ‘Justice’, though, Urmila Pawar explores violence, and honour, and ultimately, autonomy and choice surrounding motherhood, while Rajee Seth’s ‘Just a Simple Bridge’ explores how parenting a son can be different from raising a daughter.

But women aren’t only mothers and daughters in this collection – they are also temptresses and sources of fear and loathing. ‘Bayen’ by Mahasweta Devi, explores how witches are created by society, from those they fear – in this case, simply being associated with a cremation ground is enough to brand her as evil and an object to be feared.

Crematoriums feature again in ‘The Empty Chest’, where Maimoni Raisom Goswami juxtaposes society’s hatred of prostitutes with the fear of death, and uses imagery of the empty chest to ask if society fears those things it does not want to understand. This is also the dominant theme of ‘The Widows of Tithoor’ by Viswapria L Iyengar, which explores society’s fear of widows and their rituals. And in ‘The Hijra’, fear can even overwhelm the deepest love.

Of, for and by women

The most powerful stories in Separate Journeys centre on honour and how women are seen in society. In ‘Thayaal’ by Rupavati, the central theme is how much it matters that daughters are honourably married off – and in this case, how an act of “saving” a woman’s honour can be paid back. ‘Izzat’ by Ashapurna Devi is more critical, asking if it is the honour of a woman who lives in a basti that her middle class employers are concerned about, or that of the women in their own household.

And with ‘Private Tuition With Mr. Bose’ by Anita Desai, we take one step further and ask how honour exists in the eyes of the men of the household – in this case, what the titular Mr. Bose thinks his lovely pupil feels about his domestic arrangements. In each of these stories, we do not ask how the protagonist feels about matters of her own honour, but see it as others do.

If there is a theme running through these stories, it is that women rarely have complete agency over their lives or their bodies. They are mothers, daughters, prostitutes and widows, but rarely do we see women depicted as persons in their own right. Nowhere is this more powerfully expressed than in Jeelani Bano’s ‘I’, where the narrator asks who women are to us all, or indeed, to themselves. There are rarely easy answers.

These stories, all told through meticulous translation, made me pause and reflect. We read stories with powerful women characters all the time, but really, how much – or how little – agency do most women have? What does honour mean to the women whose lives are determined by it? Does one woman’s honour matter more than another’s? And what does it take for a woman to be anything beyond a mother or wife or daughter or temptress? This is not a light read, for a reader to breeze through in a single day. Savour this collection – it is certainly worth your time.

“There’s no need to cry out and call on Boudi. It’s clear who has the last word in this house. You’re not to fall at their feet, thinking of your daughter’s izzat. The babus don’t care about the izzat of a low class girl.”  – ‘Izzat’, by Ashapurna Devi.