The story of Tamil labourers b.. 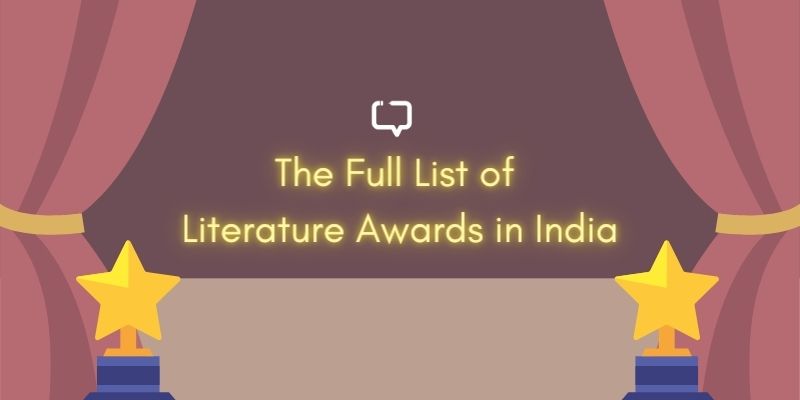 In our for books published or awarded in 2021.

Description: Insituted by the Ratanlal Foundation and presented at the Bhopal Literature Festival, the Sushila Devi Award is among the literature awards in India which focus only on women’s writing, giving out the Best Book of Fiction written by a woman each year.

This year awarded to: Anukrti Upadhyay

This year awarded to: Madhu Kankaria for her book Hum Yahaan The (हम यहां थे).

Description: The award was instituted by Thakazhi Smaraka Samiti and Department of Cultural Affairs, Government of Kerala in the memory of renowned writer Thakazhi Sivasankara Pillai. It includes of Rs. 50,000, a citation and a plaque. The first award was received by Prof. G. Balachandran for his work Thakazhiyude Sargapadhangal, a study on the life and works of Thakazhi Sivasankara Pillai. Except for the inaugural award, the award has been given for a writer’s overall contributions to Malayalam literature.

This year awarded to: M. Leelavathi

Description: The Sahitya Akademi Award is a literary honour in India, which the Sahitya Akademi, India’s National Academy of Letters, annually confers on writers of the most outstanding books of literary merit published in any of the 24 major Indian languages such as Kannada, Hindi, Tamil, English, Bengali, Punjabi and the 22 official languages of India.

This year awarded to: Namita Gokhale for Things to Leave Behind

Description: Presented by SheThePeople, the Women Writer’s Prize aims to shine light on the wide range of women’s writing, which is often made invisible by awarding insitutions. It includes a cash prize of Rs. 50,000, split between author and translator in case of translated books winning the award.

This year awarded to: Budhini, written by Sarah Joseph and translated by Sangeetha Sreenivasan.

Description: CV Kunhiraman literary prize is awarded by the CV Kunhiraman Foundation. The prize consists of ₹10,001 in cash, a citation, and a statuette.

This year awarded to: Sethu (A. Sethumadhavan)

Description: The AutHer Awards – a joint venture between JK Paper and Times of India — is a celebration of women authors who have added value and creativity to the literary space.

Description: The Vani Foundation Distinguished Translators Award honors those translators of Indian nationality who have consistently and qualitatively facilitated literary and linguistic exchange between at least two Indian or international languages.

This year awarded to: Arunava Sinha

Description: The Jaipur Literature Festival, in association with the KL Sethia Foundation, established the award in memory of Mahakavi Kanhaiyalal Sethia, a renowned Rajasthani and Hindi poet.

This year awarded to: Ranjeet Hoskote

Description: The Nadoja Award (Kannada: ನಾಡೋಜ ಪ್ರಶಸ್ತಿ) is a prestigious award presented annually by Kannada University, Hampi, India to eminent personalities for their contribution in various fields. The word “Nadoja” belongs to Adikavi Pampa which means ‘teacher to the Land’s’.

Description: adma Shri (IAST: padma śrī), also spelled Padma Shree, is the fourth-highest civilian award of the Republic of India, after the Bharat Ratna, the Padma Vibhushan and the Padma Bhushan. It is awarded by the Government of India every year on India’s Republic Day. They are awarded to Indians in recognition of their distinguished contribution in various spheres of activity including the arts, education, industry, literature, science, acting, medicine, social service and public affairs.

This year awarded to: Poet P. Narayana Kurup for literature

Description: Awarded by the The Arunachal Pradesh Literary Society (APLS), in honour of the luminary Lummer Dai,. It comprises a specially designed trophy, a citation, and a cash award of Rs 10,000.

This year awarded to: Ajanta

Description: The New India Foundation fellowships aim to “foster scholarship and writing around all aspects of independent India” and “provide a wider audience for Indian-language texts are awarded for a six-month period”. They carry with them a stipend of Rs 6 lakh per translator/team. Additionally, the foundation notes that the fellowships also offer direct mentorship under the NIF’s Language Expert Committee as well as its trustees.

Description: While not exactly a literature award, the Parag Honours List is a curated collection of outstanding books in English and in Hindi, for children and young adults, by the Parag Initiative of Tata Trusts. It aims to promote access to a comprehensive curated list of good quality children’s literature that librarians, teachers, parents and children can refer to and read. Parag Honour List 2022 features 44 books in Hindi and English for children, young adults

Features: Jamlo Walks, Our World/Humari Duniya, Sometimes Mama, Sometimes Papa, A Germ of an Idea, among others.