Here are two books to read for..

"Kohinoor is just a stone. The.. 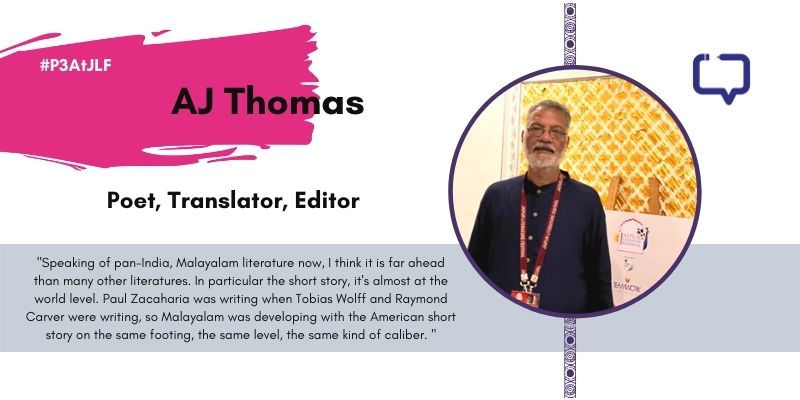 Prakruti Maniar interviewed A.J. Thomas, one of the most prolific literateurs of our time. His work with poetry, translation, and editing, spanning 40 years, is almost impossible to capture in a single interview. At the Jaipur Literature Festival 2022, we focused on his role as the editor of the Sahitya Akademi journal Indian Literature, which he edited until recently, the changes required for the Akademi’s works to reach the audiences, and much more. Check out excerpts from the interview transcribed by Amritesh Mukherjee.

Prakruti Maniar: Hello Sir! It must be nice to be back on ground for the festival. I want to speak to you about the invaluable work that the Sahitya Akademi does in bringing out the bi-monthly journal Indian Literature, of which you were an editor. Could you share a little bit about it with our readers?

AJ Thomas: Hello! Yes, it’s nice to be back on ground, this is my third time visiting the festival.

Speaking of the journal Indian Literature, you’re absolutely right about its value and the kind of work that goes into putting together the 200, often more, pages of prime literary material from all over India, from all the 24 languages. Towards the end of my tenure as an editor, I was the only one proofreading it. Earlier Indian literature was a section in Sahitya Akademi. We had staff of five – me, my private secretary, the proofreader-cum-copyeditor, then the typist, but the team has dwindled down over the years.

When I began as an assistant editor in 1997, it was a significantly important section in the government. H.S. Shivaprakash, the famous Kannada poet and playwright, was the editor at that time. And before that, it was K. Satchidanandan, the world renowned Malayalam poet. I became editor in 2007, 10 years later, after Nirmal Kanti Bhattacharjee.

In these 10 years, I got chance to work with illustrious personalities like U.R.Anantha Murthy, Gopi Chand Narang, and writers from all over India. When I took over as editor, I wanted the reader to experience that diverse richness which I had got to experience, that I personally felt. You being a writer yourself, you feel exalted in such company. So I wanted to share that kind of first rate literary experience from all languages.

Prakruti Maniar: I am an avid reader of the journal and I think the diversity is its strongest suit. What are some of the challenges you faced?

AJ Thomas: What happens when you publish a book? You have at least three readings of the final manuscript and you have competent copy editors to do that. In publishing Indian literature, you run the risk of taking it for granted that the translation is right, which may not be true. What we needed were experts in each language to cross-check that the translations we received had merit, and a mechanism to make this process smooth and periodical. But this requires money and the government was not always willing to pay.

Over the years, between 2010 and 2021, I returned several times as the guest editor a couple of times, and we tried to get things going, but to no avail. I am hopeful from Antara Dev Sen, who has just taken over. She used to edit The Little Magazine, and the journal is in good hands. But there are several such things they will have to look after.

Prakruti Maniar: One of the things missing from the journal’s work is access on the digital – one cannot even subscribe online, let alone access chronological archives. Why so?

AJ Thomas: What do I say? I get your question. After 2010, when I returned as guest editor, I was pushing to put up a payment gateway at the very least but bureaucratic apathy prevented it from happening. I wanted to have a digital and physical version and readers could choose what to subscribe to. Only recently we are able to buy the books published by Sahitya Akademi online, but not the journal.

It is one of my dreams that did not get realized. It saddens me. On the one hand, we are aiming for a Digital india, but then the Sahitya Akademi and other bodies which rely on the government even though they are editorially autonomous, are languishing behind for lack of resources and red tape, and also timing.

AJ Thomas: So the Sahitya Akademi is a 71-year old institution, and Indian Literature is 65 years old. First, it was a biennial, then quarterly, then bi-monthly. During my time as the editor, we had set up the system – funding, assistant editors and all – to turn it into a monthly, but then I got the opportunity to go to Libya to make some money and I took it up. So maybe part of the fault lies with me also.

But the thing is, living in the capital is not easy on a government salary. After 2010, between Satchida, Subodh Sarkar, Yashodhra Mishra, we did our best to edit it, and keep it alive.

Prakruti Maniar: This experience must have given you such a keen sense of understanding, of the pulse of literary writings across India…

AJ Thomas: It’s a very interesting thing because Indian literature cannot be spoken for by any one person, but as editors, we get a birds eye view, like an air traffic controller, about all the states, all the translators or the old publishers, authors, editors, and we make the connections between these.

Right now, you can pick up a copy at any of the regional Akademi offices which are there across Kolkata, Mumbai, Chennai and Bangalore, but Antara has proposed that we need to have an online version.

Prakruti Maniar: Speaking of your many roles as poet, translator, professor – how do you juggle them all? Is it not difficult to go from one role to another?

AJ Thomas: You see, I’m a Gemini. So I can play different roles easily haha! But the thing is, I can switch from one to the other without any problem because the academic part, I’m not too much into theory or anything. I do write literary theory and criticism, as I write reviews, but I don’t go into the academics very deeply. That apart, all the other things, from Old English, Medieval English, all that I can deliver lectures at a 24 hour notice – from Beowulf to Virginia Woolf, to Indian Literature and Indian Literature in translation, I can prepare a one hour long lecture easily, when anyone asks me.

I have also edited the 1700-page, two volume, four book project “Best of Indian Literature”, covering the first 50 years of our country after Independence. So in a way, being an editor enriches my work in academia.

Prakruti Maniar: That’s fascinating! Cutting from the past to the present, who are the young writers and poets whom you think are making a mark – from any part of India – right now?

AJ Thomas: What I did ambitiously after becoming the guest editor in 2016 was to bring out young poetry, I call it the 21st century Indian poetry. There was 21st century Marathi Poetry, Gujarati Poetry, Bangla Poetry, Odia Poetry, like that I brought out from nine major languages, only Urdu, Kannada and Tamil from among the major
languages, were left out. Each one was meant to be a special book because there will be 120-150 pages. So, I had all that planned but the pandemic took it away. That is one thing.

The other is encouraging young writers. I used to run a column called Young Life, with poets and fiction writers between the ages of 12 and 18. Then I enhanced it a little bit (to) 19, till 20, the adolescents and teens. I used to get fantastic contributions to the Younglife Section, and even after leaving the journal, I am still getting very good feedback. Many of the young poets and writers I introduced thus have been able to launch successful writing careers.

Speaking of Malayalam poetry, poet Satchidanandan once jokingly said, “There should be at least 6000 Malayalam poets…” But there are at least 40-50 very vibrant, serious poets. Speaking of pan-India, Malayalam literature now, I think it is far ahead than many other literatures in particular the short story, it’s almost at the world level. Paul Zacharia was writing the kind of short story Tobias Wolff and Raymond Carver were writing, even before they had begun writing, so Malayalam was developing with the American short story on the same footing, the same level, the same kind of caliber. That’s the early 70s onwards. And Malayalam storytelling is still the strongest – 80% of the recent awards have gone to Malayalam translations. Short stories and novels are widly popular right now.

Prakruti Maniar: Finally, let’s speak of AJ Thomas the reader. What are you reading right now?

AJ Thomas: Right now I’m reading some very light fiction in Malayalam. After the second wave I gave myself a break, and stopped reading very dark writing. I’m reading light fiction in Malayalam and getting some entertainment for myself before I’m writing poetry and other serious pieces in between. Just jokingly I’m saying this, my kind of reading now is not very, say, an educational kind of thing. It’s recreational. Recreational is the best way to say that.

After all this gloom and, you know, let me ask you one question. How many noir films can you see in a row? You go to Netflix, you may see one or two but that’s it. Because we are living in a big, big noir universe around us right now. So why should I watch that same thing?

There is absolutely no need to add to the gloom. So I’m writing light verse(s), very dream-like verse(s), which I will be reading later in the evening.