All the Lives We Never Lived b.. 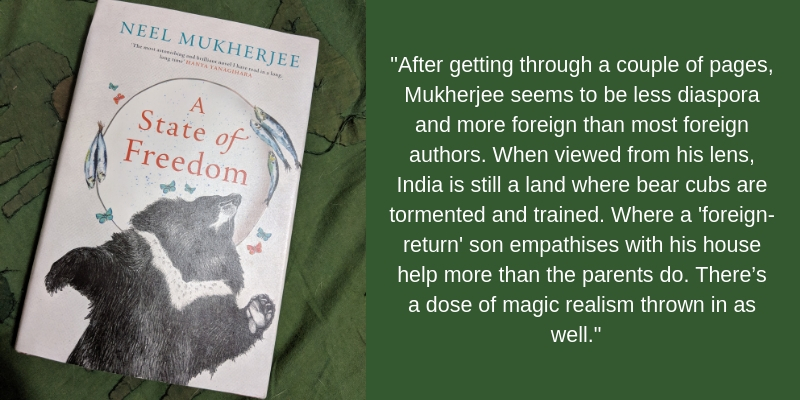 At 275 pages, Neel Mukherjee’s A State Of Freedom seems like a short read. It is divided into five seemingly unconnected parts. The common thread that runs through them is the protagonists. We meet them all in the first two parts but their stories unravel bit by bit through the book.  Mukherjee comes across as a typical diaspora author — someone who’s writing about his motherland and catering to a mostly Indian crowd. But these are not stories that glorify Indian culture and wax eloquent about the colours. There is no grand Indian wedding and not a single mention of an elephant (which is a relief!).

But after getting through a couple of pages, Mukherjee seems to be less diaspora and more foreign than most foreign authors. When viewed from his lens, India is still a land where bear cubs are tormented and trained. Where a “foreign-return” son empathises with his house help more than the parents do. There’s a dose of magic realism thrown in as well.

Part I is the tale of a father and son touristing their way through Agra. There is much talk of monuments. We also read Shah Jahan’s much-heard love story and his cruelty in taking away the labourer’s thumbs (hands?). There is a sense of foreboding through it all which lends itself to an appropriate climax. Characters from here show up to own their own narratives in the latter parts of the book.

Part II charts an immigrant son’s return home. He is astonished by how much his perspective has changed and also at the fact that his parents’ hasn’t changed at all. He tries his best to empathise with Renu and Milly, the domestic helps, while skirting the hostility his mother presents at this idea. Many an emotion is communicated through food — the love the mother has for him reflects in the abundance of food that is made. This abundance time and again leads to spoilage. Renu and Milly express their displeasure for their employers and possibly each other by mugging up the recipes they have been practicing since years. And so on. It’s not clear where any of this seems to be going but I stick with the book.

Part III was where I truly felt like giving up. The cruelty that unfolds on each page seems like a release — of what, I can’t quite tell. A family in the village chance upon a bear cub,  torture it to tame it, and use it to make money — this is the gist of it.

Its owner Lakshman is both unloved and incapable of loving; a victim of his surroundings and in turn, victimising both his family and his precious find.

He goes from village to village trying to make a better life for himself. His experiences are more bitter than sweet but not once do we see him share a tender moment with the bear. A character that inspires no sympathy in the reader — someone so easy to hate — one wishes to ask where the vulnerable moments are. In a book where everyone is isolated and thereby lonely, the reader is almost apathetic to this man’s state. Milly is a like a doll or a puppet. She doesn’t change much as she grows. And her fate is mainly decided by the people around her.

Labouring through, we reach Part IV — Milly’s story. Hers is the most well-established character and the most detailed story of the lot — probably because this story is itself divided into ten parts. We see her life trajectory from when she was a child till she herself bears children.

Milly is bright and kind, but has the misfortune of being born in a family belonging to the lower rungs of the socioeconomic strata. She is sent off to work at a very young age and in her interactions with her various employers, we see a power-play unique to Indian shores where even the most educated and liberal champion this form of slavery and don’t hesitate from actively discriminating against their employees.

Mukherjee’s greatest achievement is to call out Indian society by shoving a mirror in their faces.

To his audience in the west, these are stories of a foreign land. For us, this is our reality, and not the one we are proud to tell the world. Mukherjee skilfully drives the point home by making the reader question her behaviour and reflect on her own interactions. Milly’s is the story that stays with you. I’d like to know about what happened to her after the book ended.

Part V deals with Lakshman’s brother, a construction labourer. His monologue about his life, job, and grievances is laborious — mainly because it written to be read in a single breath. No punctuation; no respite.

A State Of Freedom explores themes of isolation and power across the book. A lot of the times the stories are cruel and unforgiving. The harshness feels forced and unnecessary. Bitter aftertaste be damned, this is a persistent lump of horror and disgust in the throat that threatens to be thrown up if instigated more.

Should you pick this book up? I don’t recommend it unless you’re looking for a short read and you have the stomach to get through visuals of animal abuse. Pick up Vivek Shanbag’s Ghachar Ghochar or Siddharth Chowdhury’s The Patna Manual Of Style instead.

It seemed that the Law of the Fridge was universal across cultures and continents; things went there to die slowly and be forgotten.

Final Verdict: ?? – Borrow it, use it as a travel companion.  Or don’t. You won’t miss anything great.

Hear: All of Satyajit Ray’s music from The Darjeeling Limited — it served as background score and is as Bengali as it gets!

Performer, traveler, movie buff, permanent member of Hatter's Tea Party; not necessarily in that order. Also writes for publications like Verve, Indian Quarterly, and The Ladies Finger when her pup allows it.