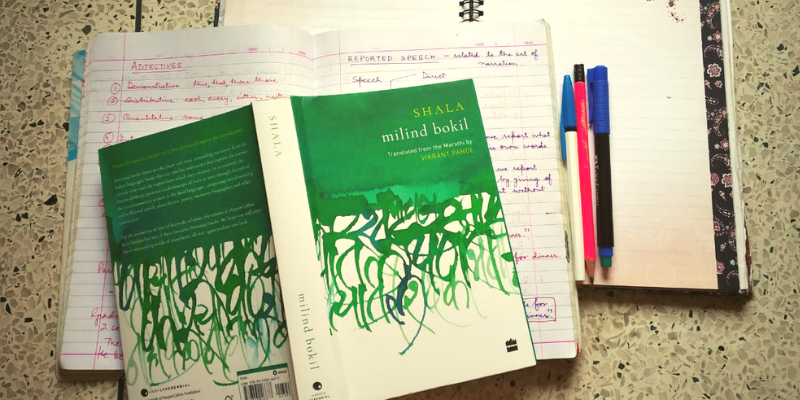 Whenever Bryan Adams strums his guitar to this song, chances are we think of those innocent times of our lives –  our school days. And in particular, it is high school (roughly Grades 9 to 12) that holds a special place in our hearts, including mine. Those are, after all, the formative years, filled with adolescent experiences, escapades and discoveries. And this is one of the reasons why Shala by Milind Bokil appeals so much to its readers.

Shala (the word can be translated to English as School) is the story of 14-year-old Mukund Joshi, who is in class 9 and newly in love. The novel is set during the years of the Emergency and subtly presents a period of change in the society as well as in our protagonist. The novel is narrated from Joshi’s point of view (everyone will relate to using last names to address your friends) who lives his momentous year in school with the reader, as he studies, learns, teases girls, falls in love, gets punished and witnesses the changing society and the world around him.

The focus of the text is on the sweet musings of first love, with all its relatable innocence. He falls in love with Shirodkar (whose first name, again, we are never given) but falling in love is easier than expressing it. He knows that talking to a girl in class will end in ragging, since girls and boys did not mingle in those days.

The only time when the two can talk is when the class plays Dumbcharades. Joshi knows this is the one time he can impress his lady love.

Theirs is a love that blossoms in snatched conversations to and fro tuition classes, during meetings in the temple when they cannot talk because Shirodkar has brought her sister there and, one time, at her house when she invites him and introduces him to her family. The pangs of this love are far removed from the world of today where the only problem is that talking is too easy, and Bokil has done a wonderful job of portraying those long lost days and times.

But the novel is not just about Joshi and his love. It is populated by various characters that we all have met in our lives –  albeit with different names. The gang of friends Joshi hangs out with, his parents, the teachers who bore him, who entertain him, whose classes he hates and loves and finally the one figure that has impressed him a lot in his formative years – his Naru Mama. Behind this deceptively simple storyline and straightforward characters, though, lies hidden something deeper and more far fetched.

For Shala is as much as portrait of adolescence of a boy as much of the adolescence of a free country –  a time of great change for both of them and in this bildungsroman, in this coming of age story not everything is dreamy and sweet. The background is that of Emergency and  though for the boys at school it hardly means anything apart from more lectures on discipline by Appa, school their principal, and more songs singing the praises of discipline and the country,  its effect looms somewhat in the background in the form of characters who are arrested and deported for raising anti-emergency slogans.

Reading Shala reminded me at times of reading Swami and Friends, but this is not the innocent world of Malgudi. This is the world of teenage boys, high on hormones and without the knowledge on how to handle them. It’s the age of sexual changes and puberty and the boys seem clueless as to what is happening to them. It’s a world where innocence has now started receding and worldliness has started to set in. Phawdya, then, has to help his mother at the vegetable shop  while Chitre has to survive with constantly bickering parents and a nanny who is always on the brink of sexually harassing him. Then there is also an attempted suicide over a failed love affair – sordid details that strip off the veneer of innocence from a teenager’s life.

The prose is highly descriptive and filled with a local flavour in the language of the characters. The language as well as the setting have been efficiently presented by translator Vikrant Pande . Bokil also gives us the portrait of life in a chawl, where people meet every evening to play chess, badminton and cards and gossip after a long day. But everything is on its way to change – including the somewhat idyllic school life of Joshi. By the time the novel ends, television has entered his chawl and put an end all the get-togethers in the evenings, two people he admired from his neighbourhood have been arrested, his favourite teacher has been thrown out and even the patch of paddy fields he so loved are being changed into a chawl. Mukund knows that :

“School days were over. All that remained was a dreadful year called Class Ten.”

He is all set to leave behind the world of childhood, and with a loss of everything he held dear, he is now to enter the world of adulthood, symbolic of the changes that are due to come in the country and society as it, too, is on the threshold to saying goodbye to a relaxed era and to a community-driven way of life.

I found the novel a tad too long at 370 pages. I felt that a narrative around 50 pages less would have been tighter as some of the escapades of the protagonist and his friends could have been done away with. I had also expected the Emergency background to play a bigger role in the text than it did. In fact, the text would work more or less the same way even if emergency were removed from the context. Also, I wished there was some scope for a female point of view in this all-male text as I would have loved to get some idea what the girls felt.

I was jealous of Phawdya. And angry at my parents! Why couldn’t they own a shop like this? Any shop for that matter: vegetables, stationery, Kirana, cosmetics or whatever! Even a shop selling Pooja items would do. I could sit at the counter the whole day and give  away the entire shop for free to Shirodkar whenever she visited us.

Overall, an entertaining and enjoyable read that has been translated wonderfully. This is a book which is local in its time and setting, yet global in its themes and characters.

Anyone who loves a good book, who is looking for a nostalgic trip down the road, who loves reading books about children and adolescents, YA fiction, and for lovers of writers like R K Narayan and Ruskin Bond. For all those who love watching Rockford.