Yajnaseni: The Story of Draupa.. 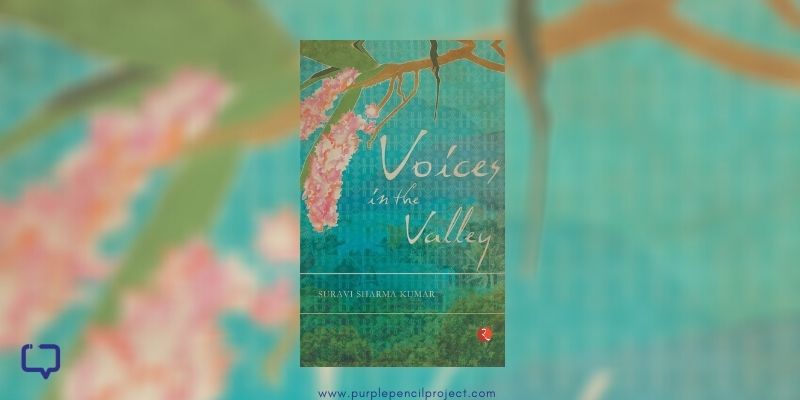 Suravi Sharma Kumar’s Voices in the Valley is a book that takes its readers to the beautiful yet angst ridden state of Assam and covers a period of almost 50 years in the life of the state as well as the novel’s protagonist Millie, as she moves from being a young girl to a nuanced politician.

The novel opens somewhere in 1960s in Tezpur, Upper Assam where the Chinese military has advanced considerably into the Indian territory and the people of the state are preparing trenches for hiding in case of air strikes. The novel opens with two distinct images: little Millie running around in her garden as she “went about the Drona weeds … sucking nectar from the white flowers”, whereas “in the backyard, her father and uncles were digging a trench.” These two contrasting images – of beauty and war – continue to run parallelly as we witness the change in the fortunes of the state through a span of the next fifty years as it goes through various periods of upheavals, the student uprising against the infiltration of the state by what are considered to be outsiders, and the continuous politics that is used to trick the people of the state even as those in power keep getting more powerful.

Alongside, runs the story of Millie or Mahua, a young idealistic girl in an orthodox family. We see her as she grows up, becomes a person in her own right, as she refuses to get married just for the sake of getting married and finally rises through the ranks of politics and emerges as a well-known and respected politician by the time the novel ends.

Voices in the Valley tries to bring to the reader’s notice the various voices that exist in the valley and that have not often been a part of the mainstream conversation in the rest of the country. Sharma’s effort to do so is commendable but the novel itself gets bogged down by its writing and narrative technique. The changes in the chapters in the novel – and the subdivisions within the chapters themselves – feel clunky and lack smoothness or flow of narrative. It feels like reading various episodes in the life of a family and their neighbourhood without a lot of connection between them except that they happen to the same set of people. This is especially jarring when such jumps happen within the chapter.

For example, chapter 6 ends with an episode from Millie’s past – a description of how the young girls would roam around in groups in the evenings. This description comes in all of a sudden in the chapter and plays no role at all in taking the story forward. Chapter 7 begins with a long description of how the afternoons at home are spent and jumps quickly to the present with short description of a wedding in the family and then the wedding itself. In chapter 9 again, we see Millie busy with some work when her cousin invites her to meet some of her friends. We are then told how Millie’s two younger sisters have become almost a recluse because they are concerned with their skin colour. And the next thing we know is a break within the chapter after which we directly learn of Mille taking admission in the college. This constant shifting between timelines and events gives the novel a jerky feeling and leaves the reader at a loss of what to expect next. Worse, it creates an episodic narrative where the reader seems to be seeing some events from Millie’s past which may – or may not be – related to what happens next.

Many chapters also begin with sentences that seem more suitable as instructions/descriptions in a play. For example, many chapters open with lines like, “A Sunday morning in May”, “A foggy winter morning”, “One quiet afternoon”, “The humid long days of June”. The repeated use of such chapter openings again mars the beauty of the novel. Also, there are parts where she describes the political situation in the state during and after the revolution by the students and these descriptions (in chapter 11, 22) instead of blending with the narrative, read like pieces of non-fiction.

It is only after chapter 17 that the novel becomes somewhat streamlined as it focuses mostly on Millie’s escapades and her life in a more linear fashion. Kumar has attempted to create a sense of the late 1980s and early 1990s not only with the description of what was happening in the social and political spheres of the state but also through the use of the names of the various programmes that were aired on Doordarshan that the families would gather around to watch. She has also attempted to touch a lot of issues in this single novel – including the political situation in Assam, the rising female foeticide, the situation of women and daughters in households and has presented Mahua as a strong character who rises against all odds and emerges as a beacon of hope for her family.