In Conversation With: Hemant S..

In Conversation With: Shilpi S.. 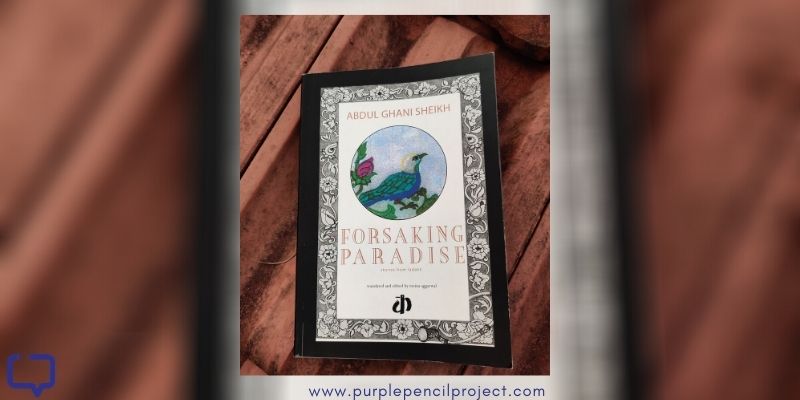 Translated from Urdu by Ravina Aggarwal

Discovering Indian literature across the country giving a broad spectrum of stories known and unknown is one of my greatest joys as a reader. Ladakhi literature, an unexplored territory, brought forward by Katha introduces us to the region’s history and culture Translated from Urdu by Ravina Aggarwal, Forsaking Paradise by Abdul Ghani Sheikh, set over pre – and post-independence, brings us stories from Ladakh and its rich heritage tracing back to the Buddhist influences from the monarchs who ruled until mid 19th century, followed by the Dogra rulers when Urdu was bestowed . Simple in nature, the stories give an insight in to the Buddhist and Muslim communities of Ladakh.

A collection of 12 stories, each story peppered with local flavour retaining the unique words like abiley and ama , depicts some of the dilemmas of Ladakhi society. It also sheds light on the after-effects of the Partition, where in the borders divided family and friends separated by a few kms. Each story begins with a beautiful illustration depicting the story.

‘ A True Portrait’ and ‘A Forsaken Paradise’ depict the tourism and aftermath of urbanization. The former shows us the life of an old man sought by the tourists for photos and the competition created by the industry,  while the latter illustrates a clash of tradition and modernity , depicting how different generations approach this issue of tourism differently.

In ‘Two Nations, One Story’ , brothers living some distance apart in Skardo, Baltistan and Ladakh  are separated by a border created during independence and a long wait to meet their loved ones. “In spite of being so close to his brother’s home, he is so far away. Like a star in the sky which he can see but not touch.”

‘The Locked Trunk’ has a childhood friendship preserved in a suitcase of memories with a promise to exchange it when they next meet. It shows a child’s perspective of military and state rules. Both of them bring in stories of partition and pain of fragmented families and friends. In ‘Abhiley’ (a Ladakhi term; Abhi- grandmother, ley- mark of respect) we have a grandmother worrying for her granddaughter who has moved to Srinagar for education. ‘The Smile’ has a whiff of romance and first love while ‘Hopes and Desires’ talks of a unique custom of forming paternal/sibling relationships during Buddha Sakyamuni while also highlighting class differences.

Most of the stories deal with everyday life, of families and friendship. Few bring forth the aftereffects of modernization, of bureaucracy and corruption. Among these is a historical tale, that takes the reader on a ride foregrounded by conflicts between Ladakhi and Tibetan region.  As Aggarwal puts in the introduction – “Changes wrought by development, hopeful future where courage and honour prevail amidst corruption, nostalgia , as culture is commercialized and the past turned into an object of fetishism ‘  are recurrent themes in Ghani Sheikh’s writings.

While the stories are simple, the introduction shines, reflecting the history of Ladakh. The translation is seamless and keeps the flavour of the region in writing like Ali re, bali re, khab re, khabchag re, rumbu re, rumchag re – a prayer offered during the first Buddhist month by children . With Forsaking Paradise – a paradise now an illusion with changing society and circumstances – we have Urdu literature from the region, I only hope that going further we also read translations from Bodhi too. I found myself transported to yesteryears and took a virtual trip to Ladakh with the stories.

” I gazed at the panorama around me for a while and then descended on the trail that Angmo and I had walked forty years ago. I wished I could rest my tired head against this earth, stamped with the traces of our youthful footsteps. There used to be such solitude here, such peace, sometimes progress can be so disastrous.”