Friends, conversations and a bookstore in Banaras

Friends, conversations and a bookstore in Banaras 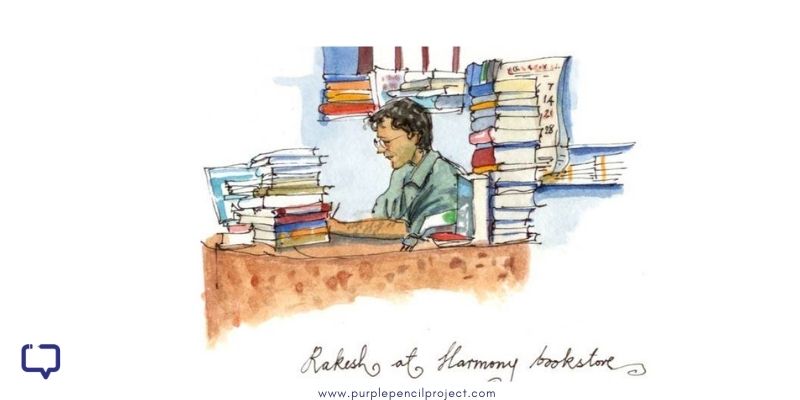 Why does he not stock books in Hindi and those for children? A friend I had gone with to the Harmony Bookstore in Banaras asked me.

I pointed her to Rakeshbhai, the curator and owner of this deceptively quaint bookstore. “If I keep Hindi books I need to have a range and number that does justice to the customers and the collection; it makes little sense to have only few books in Hindi,” Rakeshbhai responded.

Similar for books meant for children. “I can suggest bookstores.” he added. The Lonely Planet refers to Rakeshbhai’s labour of love as ‘The best bookshop in Varanasi, with a particularly good selection of titles on Varanasi and the Mughals’. Another website praises the ‘poetry collection’. Dayanita Singh referred to it as ‘a story in itself’.

After one of my initial visits (which was incidental), I came across an article by Rakeshbhai where he talked of Harmony’s history.

In December 1996, I opened Harmony, with 200 books, overlooking the river Ganga, in one of the quietest parts of the city. From my chair I could see buffalo swimming in the river, and in the mornings small groups of pilgrims walked by my shop on their way to take a holy bath in the Ganga. Occasionally, a procession would pass taking a dead body to the cremation ghat. And often pilgrims would come into my book shop trying to buy flowers and incense.

This started a lifelong association, and I began to frequent it, like one would a coffee shop. Initially we discussed books and authors. I, for example, shared my interest in writing articles and book-reviews and he talked of how he got into publishing.

On my asking if he supplies books to education institutions in town (it boasts of more than a few) he responded saying that with the practices he adhered to he found that very difficult. He added that he supplies to institutions in Europe. Then the conversations flowed. We talked about the town (few Banarasis don’t indulge in this) and else.

Harmony has since turned into a place I go to when friends come to town; friends who profess affinity for rhyme and prose. During a visit with another friend a then freshly released book caught my attention. It talked of an ideology Rakeshbhai abhors and was placed in the wildlife section. “Does not look like a mistake to me”, I commented!

“This section”, he smiled and said, “is about those who speak a language that I do not understand”. But why punish wildlife – quipped the friend!

During visit with a third friend we talked of donated books and creating reading spaces. Rakeshbhai was clear – lack of physical space is not what is stopping people from reading books and that people only donate books that they do not want to read. It is perhaps the manner in which he engages, besides, of course, the curated collection, that he and the bookstore find place in Namita Gokhale’s Jaipur Journals: A Love Letter to the Greatest Literary Show on Earth.

I also go there to put in time with myself and books. It’s not-large premises has corners where it is easy for me to get lost. There have been occasions when I have returned after looking at the books, touching and smelling them – accompanied by silence.

In her 10 bookstores in India that you must check out, Suzanne Jennings writes, ‘Harmony Bookstore in Varanasi is on the list for two reasons. The first one if because of the immense feeling of transition that overpowers you as you step inside the calm confines of this little bookstore, temporarily escaping the hustle and bustle of chaos-laden Benaras (and by extension life). The second is the bookstore’s amazing collection’. Mannika Chopra‘s remarks reaffirms its dual attraction, ‘This is as much a store of curiosity as it is a place of business’.

On another occasion, with a fourth friend, we went for a book reading session of a then freshly released book, Krishna’s Playground: Vrindavan in the 21st Century by John Stratton Hawley. The space was cramped, few could not move, few could not see the author but faces conveyed all were enjoying. Tea and biscuits too followed the unconventional pattern. Harmony Bookstore is not a place for traditions!

I have been there with a couple of other friends well. One asked him for some of the music he plays in the store, mostly a collection of Indian classical instrumentals (Rakeshbhai and I have bumped into each other at the music festivals in town too, Sankat Mochan Music Festival and the Dhrupad Mela).

The other went a step ahead and asked if he could sleep for a night in the store – I recall some discussion on the section preferred!

Books, like people wiser have said, are not purchased like television sets – after checking details and comparing prices. They are kind of different. It is pleasure of a special nature to browse books by authors one has not read or to come out of a bookstore with a book you have natually stumbled upon. My own discoveries include Diana Eck’s Banaras: City of Light, Jenny Huberman’s Ambivalent Encounters: Childhood, Tourism, and Social Change in Banaras, and Saba Dewan’s Tawaifnama.

Harmony is one such bookstore. This place has also reaffirmed my belief that bookstores are not just places to buy and sell books. They are an ecosystem within which books are also transacted.

Coming back to the visit with the friend who asked him of Hindi and children books. I requested him for bookmarks as we were leaving. Rakeshbhai gave her a bookmark which said, ‘I hope you don’t mind that I put down in words’.

When I now go to Harmony Bookstore in Banaras, I say I am going to a friend’s store.