Chhotu: A Tale of Partition and Love by Varud Gupt...

Chhotu: A Tale of Partition and Love by Varud Gupta 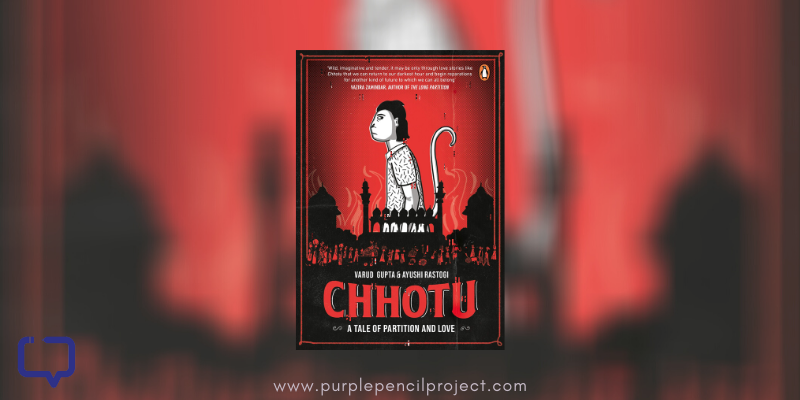 As a child, I loved reading comics. Billu and Raman were my favorites, folllowed closely by Chacha Chowdhary and Pinki. Even as I read and enjoyed their adventures, I hated that they ended too soon and left me wanting for some more. So when I picked up Chhotu: A Tale of Partition and Love (written by Varud Gupta), I was reminded of that complex feeling again; of a story ending too soon.

For Chhotu entertains, keeps the readers hooked to the very end, only wishing it had gone on longer.

Chhotu is an anthropomorphic tale – animals that possess human qualities – the good and the bad. At the center of the book is Chhotu, they young monkey, who is also the hero.

The story takes place during the turbulent times of Partition and captures the socio-political life through Chhotu and other residents of Chandni Chowk.

We first meet Chhotu as he is daydreaming of the beautiful Heer in his class and witness his initially unsuccessful efforts to woo her even as he tries to help his bapu (an elephant) running the parantha shop.

Their business is in trouble; aloos (potatoes) are missing from the market, and in carrying the dual responsibility of finding love and potatoes, Chhotu takes the leap into adulthood.

At the same time, the case of the missing aloos, and later of missing tamatars (tomatoes), becomes the triggering point for many incidents in the turbulent world of Chhotu. Soon, the entire country is in grip of the fear and frenzy created by Partition and Chhotu’s Heer also has to leave Chandni Chowk. The rest of the narrative follows the tensions that our lead is entangled in, both personal and national, which eventually shape his future.

How are the pictures?

Chhotu reads quickly, and transports the reader to the bylanes of Chandni Chowk, building a microcosm of the toll that the partition took on so much of India in 1947.

The illustrations are good, yet simplistic in their representation of the animals. Illustrator Ayushi Rastogi has clearly taken pains to get the geography and locale of the tale right and as close to reality as possible.

The anthromorphization of the animals is on point, and wonderfully detailed (think BoJack Horseman). One has to pay close attention to catch these details: for example, to register a bird sitting on a powerline like a human or to see the birds flocking over to the railway station carrying their luggage in their backs as they fly over the station.

A very interesting aspect of Chhotu is the Bollywood tadka that is gives to the story. The names of the chapters, for example, are phrases that all hindi cinema lovers can identify. The chapters are titled “Jab Tak Rahega Alu”. “Oonchi Hai Building”, “Tussi Ja Rahe Ho” etc. It places the book firmly in between the present and the past, and makes taking that leap easier for the reader; and dare I say, spicier.

Gupta also does a great job of beginning every chapter with a radio FM announcement that gives the readers a feel of what to expect from the chapter as well as satirizes that brand of media which is more inclined towards creating panic and selling products than giving its listeners any hope.

Chhotu is a nice simple tale, but for those looking for depth and nuance, it may fall short. The filmy twist and climax may not necessary work for everyone. It is less about the partition, and more about Chhotu’s coming-of-age, his personal quest for answers, for vengeance, which happens to mingle with the Partition. It could very well have not.

Despite this, Chhotu should appeal to most readers, young or old, and is a welcome addition to stories revolving around the Partition.

A special mention for the stunning cover art. The red and black background with the Lal Quila, the images of people migrating and the flames burning along with the figure of Chhotu who looms large is accurately representative, and appealing.

Final Verdict: 3.5/5 stars. All in all, Chhotu deserves an applause for all that it achieves within its pages. Given its topic and accessible pricing, perhaps Chhotu is the right place to begin one’s adventures with Indian graphic novels. 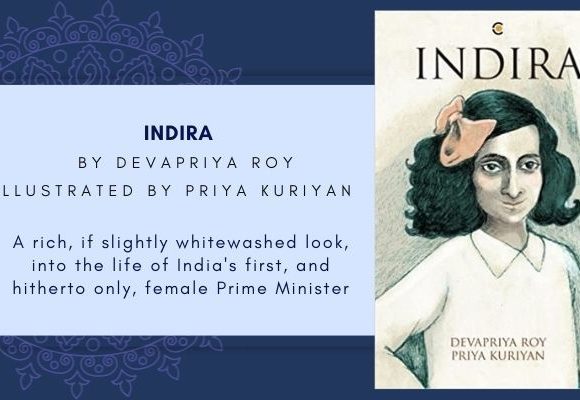 Indira by Devapriya Roy: A Graphic Novel For all