Rishika Aggarwal: on poetry an.. 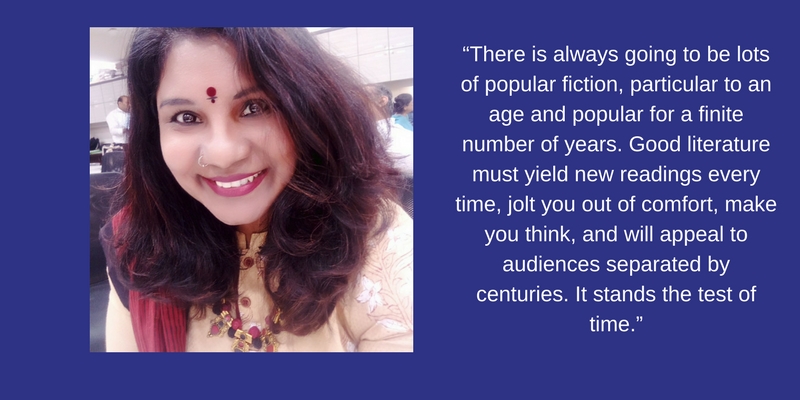 Literature today presents itself as that elusive, satisfying, cool profession.
“You’re an author? That’s cool.”
“I want to do something creative, like write,” have become cool catchphrases with a generation saturated with their mundane corporate jobs.

But what most people fail to notice is that the world of literature is so much like a job too, in many ways. Writers work, oh yes they do. There are publishers, teachers, students, assignments, contracts, balance sheets, and all the oh so boring tasks that one must carry out as someone not in the creative field.

Through our interview series, we want to engage with all the stakeholders of literature. This week, we caught up with Vidya Premkumar, Professor of Literature at Mithibai College, Vile Parle (W), for a freewheeling chat. Vidya ma’am is a mother to a 12 year-old and has been teaching literature for the last 18 years. “I first discovered books because of my parents. My mother would read stories to me, my father had a sizeable collection of Russian authors; so I grew up reading the classics early on; from Moby Dick to Anna Karenina and Tintin and Asterix.”

By the time she was in the tenth grade, she was sure she wanted to pursue literature as a career path, and went on to complete her B.A and M.A. She has been in teaching for the last 18 years. Does it not get boring to keep teaching the same texts over and over? “Never. I have been fortunate that I have got some of the best literature to teach, and the true mark of a great book is that it stands the test of time, and the test of multiple re-readings.There is always something I missed before. Sometimes, when I put my observations out, my previous students tell me, ‘Ma’am, you didn’t teach us that.’ And all I can say is, ‘sorry, I just noticed it’.”

The Indian fiction shelf, Indian bestsellers are always a debatable area among lovers of literature. The popular, formulaic fiction being churned out and consumed is both a good and bad sign and one never knows what is the right way forward.

“There is always going to be lots of popular fiction, particular to an age and popular for a finite number of years. Good literature must yield new readings every time, jolt you out of comfort, make you think, and will appeal to audiences separated by centuries. It stands the test of time.”

So there is no cause for worry at, say, *whisper* Instapoets? “If anything, the internet has brought about an amazing change. Literature comes from society, and must give back to it. If it reaches a wider audience, in the format they prefer, what’s the harm? Literature has adapted itself to the new-age and that itself is amazing.”

Reading for pleasure is often restricted within specific circles, leading to writers and readers living within their own worlds. Advertising and journalism were the only two options and a large majority of lit-grads would go back to the academics. “What people need to understand is that it helps you understand people and the world better, gives you greater insight and allows you to function better in a globalised world, which is exactly what would give you the edge in a corporate world.”

But, still, the reading culture is declining, is that true? “When I was a student, we had no option but to read the texts. Then, there was a significant dip in the early 2000s. There has been a rekindling for the form because of the new-age version of literature – Kindle, tiny tales, and anything that can be consumed on the go. But for coursework, now, there are notes, and an exam hardly requires you to go engage with the text.”

So how to get someone to pick up a book? “Give them something that is about their interests.”

Literature exams are a problem not only in MU, which has established its exams as the ‘write more, get more marks’ pioneer, but also NET, the entrance test for professorship. The whole paper is now objective, for a highly subjective field of study. “Yes, that needs to change.” Until last year, the Masters didn’t even have a compulsory research paper/dissertation. The second year students henceforth, will.

Recently, the University of London removed ‘Fanny Hill’ from its syllabus after some students were discomfited by it. How does she think controversial books should be dealt with in an academic environment? “We have had such instances, in third-year B.A. where I teach the Gender and Literature paper. ‘Lihaaf’ (by Ismat Chugtai) is often not accepted by a lot of students. Dialogue in such situations is the best option. I sit with them and ask them what aspects of the story they have difficulty and discuss it. It is very effective.”

We then switched to her own reading tastes and habits. “Now, I read on the go – in between cooking, helping my son study. I always have my Kindle with me and I read for shorter durations, but that is enough.”

So what are the books she keeps going back to? “I am a feminist and women writers feature high on my re-reading list. The Golden Notebook by Doris Lessing, The Handmaid’s Tale by Margaret Atwood, The Bluest Eye by Toni Morrison, Women’s Writing in India are some books I re-read often.”

How can you not ask for book recommendations from a Literature Professor? She holds a PhD in Native American Literature so we asked her for authors in that space. “Gerald Vizenor, N. Scott Momaday, Leslie Marmon Silko, Louise Erdrich and Joy Harjo.”

All of you following reading challenges, here’s something!