Tales from the Border by Blackwood

Tales from the Border by Blackwood 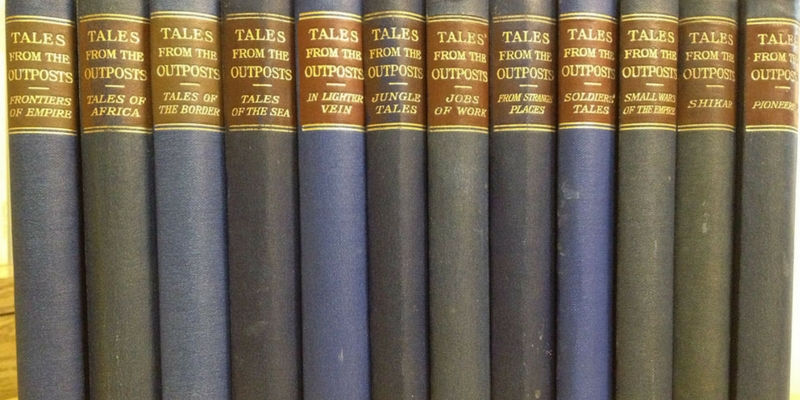 Last month, I acquired a membership to a library in Mumbai; an old, dilapidated building that has volumes and volumes of old books in English, Marathi, Hindi and Gujarati. There were a dozen people sitting there and studying, the lights above the bookshelves had not even been switched on and the dust covered volumes bookshelves had the neat-freak inside me jumping to clean them up.

Nevertheless I gave it a shot and paid the very little amount it takes to become a life member at the library. Can borrow up to two books at a time and return within a month.

My first two books were Tales from the Outpost (a Blackwood anthology) and Eva Luna (which was my first book in the #atozbookchallenge). These were old copies and had to handled extremely delicately.

Tales from the Border is a collection of stories from the Blackwood Magazine, one of the most prominent in Europe (it survived from 1817 to 1980). This particular set includes stories, part fiction and part truth from the border of the then British India (which included Pakistan) and Afghanistan. It is written in an English of old, with long sentences, with dry humour sometimes difficult to grasp and features, unsurprisingly, the glorification of the British in India and a humiliating portrayal of the rest of the sub-continent as savage, as simpletons, as dumb and in a daring yet discomforting analogy of the Indian to the Mule (acerbically titled ‘On Our Friend the Mule’).

It says, “ To speak kindly of the mule to a circle of those that know him not is too often to find one’s remarks received with a frank incredulity that is hard to be distinguished from rudeness,,,born under a cloud for, alas! He is illegitimate, a fact of which he is profoundly aware – it is under a cloud that a mule is deemed to live.”

In a book full of small skirmishes, family feuds, soldiers, ambushes, plans to go ahead and plans to make strategic retreats, this is perhaps a gemstone of a short story, that highlights not only the British arrogance of their own superiority but could have, perhaps shaped the idea of Indians for all its readers at the time it was published. (Most stories are set just before the Second World War).

Tribal conflict dominates the narratives and little stories of forgotten families, of blood feuds, of fathers avenging their sons and tribal leaders always trying to fight back against the British (and failing in all but one story) are laid out with arrogance, yes,but also with a literary authenticity.

Afridis and Pathanis, Wazirs, Sikhs and Brits mix freely here, if with clenched teeth that betray an inherent distrust, their bazaars and zun, zur zameens looking not an inch out of place. I would like to see this kind of a dominating narrative come out of India from the Indian perspective – not to claim any lost pride or belittle the British, but to see how the ‘slave’s’ story in the ‘sahib’s’ linguistic command would read. It is also a lesson in historical geographies, and little towns and villages that seem so close to home in sound and structure, yet so far away from our consciousness.

When I was reading Revival by Stephen King, I had to methodically note down all the musical references he made, never having been so fully aware of the American culture. In Tales too, I found myself looking up the Kabul War of 1842 too; I just want to illustrate our own Indian curriculum where we learn of the same conquests and wars for multiple years, but fail to touch upon nuances like those sprinkled throughout the book.

It’s a slow read, mind you. To be transported into this very different world, where rifles and swords and horsebacks were part of daily practice is difficult – because these are detailed and sometimes technical descriptions of the clashes. It’s very well written and if read from an objective perspective, Babuji Bhadur, Retalliation, A Regrettable Incident, Old For Ever and Grit will be a joyride into the past.

But read historically, as a citizen of the country that was slaved and muled, it is almost impossible to not internally flare up time and again at the portrayal of either the very fat or undernourished Indian, whose humility and servility is taken for granted and who, in the stories, is not allowed a single victory. Looking back, it is not unlikely that these stories were written to continue to sell the colonial idea to the citizens who had never set foot in India and yet wanted to know about the exotic east. Maybe the British did thwart every rebellion down, but the completeness with which it has been portrayed reeks more of propaganda than pure truth.

Or maybe we were far less attuned to the changing world than I would like to believe?

It could be anything. After all is said and done, these well-written yet insulting tales are worth a read. It’s the kind of book that might have been destroyed as a sign of Independence from the British. (Not that I endorse or support any such destruction of culture). But such is the power of a story – a pamphlet can be banned, an idea, a concept can be suppressed but a story lives on quietly and for longer.

I sing Sahib, lest I weep. Song is better than the tears of man.

Recommended Age Group: Above 25, and with an open mind. Remember that quote about how history is always written from the victor’s point of view.

Final Verdict: ??? – Make a purchase. Maybe an online purchase, or a kindle purchase. But buy it, encourage it. (Although the price it sells at currently is ridiculous.)