Tales from the Border by Black..

The Wedding by Julie Garwood 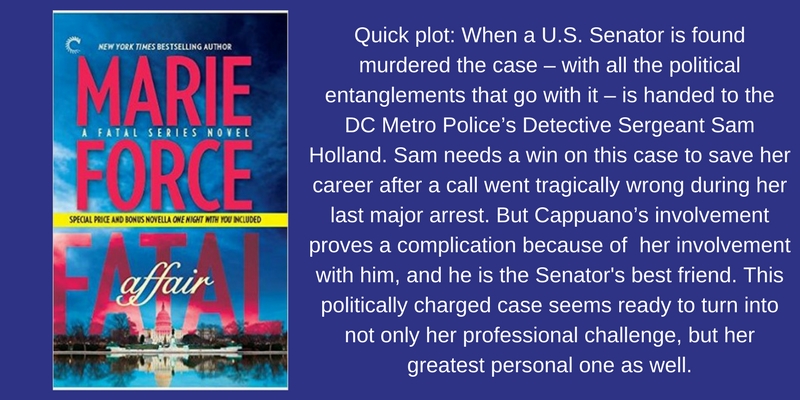 So, romance novels are a guilty pleasure of mine – they’re the perfect way to cleanse you palate after finishing book(s) that require my complete mental involvement – and Fatal Affair is a fun, quick, and enjoyable read, with an entertaining political and suspense twist that it make it perfect for just that.

Quick plot: When a U.S. Senator is found murdered in his bed by his chief of staff and best friend, Nick Cappuano, the case – with all the political entanglements that go with it – is handed to the DC Metro Police’s Detective Sergeant Sam Holland. Sam needs a win on this case to save her career after a call went tragically wrong during her last major arrest. But Cappuano’s involvement proves a complication that may be too big – she had a memorable one-night stand with him six years ago, and his reappearance proves he’s not yet out of her system. With Cappuano following her everywhere, determined to help bring his best friend’s killer to justice, this politically charged case seems ready to turn into not only her professional challenge, but her greatest personal one as well.

A particular favourite of mine in this book is the way that Force writes Holland – not only does she make her a woman with a strong character, who refuses to take any coddling from the host of overprotective men in her life, this book is one of the few times in romance novels that I’ve come across a writer who realistically portrays that potential physical challenge that a female main character can face. Sam Holland is not the ‘perfect but for one characteristic’ female character that is oh-so-common in romance novels, and that’s a good thing. An even better thing is the physical challenges that Force chooses to highlight, with (spoilers!) Sam’s dyslexia, infertility, and mentioned endometriosis. Force does an impressive job in crafting a realistic woman in the character of Sam Holland, and it’s undoubtedly one of my favourite parts of the novel.

Nick is wonderful character as well – Force writes the conflicts in his personality well, and his angst at having to go through his best friend’s life with a fine-tooth comb just days after finding him murdered comes across well. What does seem forced at times is part of the dynamic between the two leads – while most of the dynamic is brilliant, the moments with Nick’s difficulty in letting his rediscovered love-interest walk into the dangerous situation brought with her job in the police force seem stilted and a forced attempt at bringing in a level of (unneeded) conflict between them. The conversations about Sam’s health, their shared past, and the pressures the case (not her job, but this case where both them are deeply involved) brings upon them. The conversations about her job being ‘too dangerous’ seem forced – a case of knowing your genre stereotypes too well, and feeling like this is something that is expected in a romance novel – and that shows.

My other quibble is the way the mystery is resolved. Force does a great job of building the tension in regards to who committed the murders through approximately the first 80% of the book – and then resolved it within the space of less than 50 pages. Ultimately, the climax is a disappointment, because the solution hasn’t had the same time to build as afforded to the investigative process and the professed confusion of the police brass as they rush to solve this politically sensitive case. Force would have been better served to give the development of the culprit (and the length of the book) another 100 pages, or to cut some amount of the investigation and give the culprit another 50 pages, if the length needed to be kept to what it currently is.

Recommended Age Group: It’s a spicy affair, so anyone above 21 who wants a good romance, go for it.

Final Verdict: ??? – Make a purchase. Maybe an online purchase, or a kindle purchase. But buy it, encourage it. This is a solid 3/5 stars for me: while there are definitely places that could be improved, Force keeps up the most important bits through the novel – the entertainment factor, and the steaminess of the romance between the detective and the chief of staff!

Rishika Aggarwal is 23-year old perpetual student, writing poetry in between work and literary theory. You can find her reading, arguing about books with Sakhi, on tumblr, or on Gumroad, selling her all together amazing works. An edited version of this review first appeared on the writer’s Goodreads page.