The Resignation (Tyagapatra) by Jainendra

The Resignation (Tyagapatra) by Jainendra 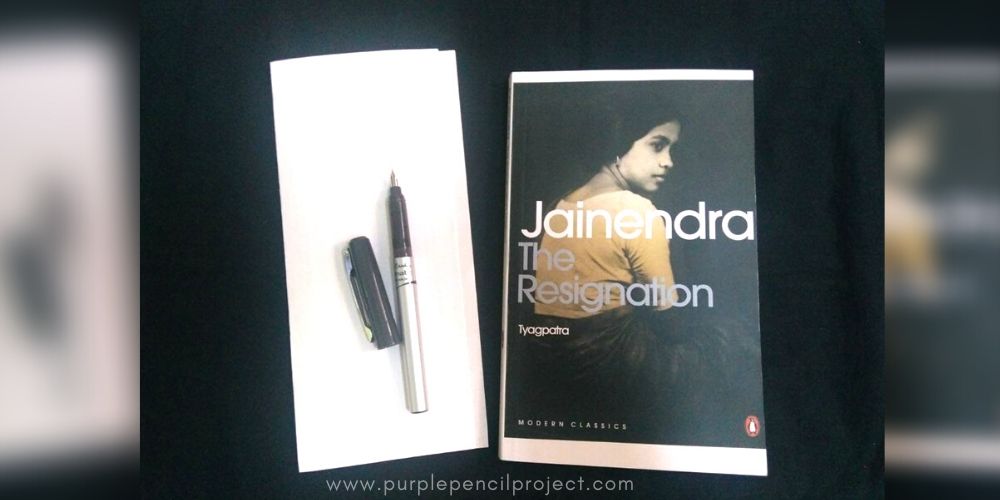 Translated from Hindi by Rohini Chowdhury

“… No, I cannot analyse vice and virtue, morality and immorality. I am a judge; so I know the limitations of the system of justice. Which is why I say, those who have the authority to pronounce someone a sinner, basing their verdict only on the weighing and measuring of small details – let them go about their w ork. I am not capable of it.”

Thus begins Tyagpatra by Jainendra, inspired by an original document discovered after a certain chief judge’s death with names of people and places altered.  It has been translated to English, The Resignation, by Rohini Chowdhury.

The Resignation is the story of Mrinal, her struggle against societal norms, her idealism, obstinacy to retain her individualism, narrated by her nephew Pramod, an esteemed judge and a man of status.

Pramod receives the news of Mrinal’s death and recounts her transformational years, from a cheerful school going girl to a quiet, star-gazing teenager brimming with love and beauty, to a pale, lifeless wife burdened by familial duties and social expectations and finally, to the one who tread an unfamiliar path, unfettered and shunned unto death.

A Walk Down the Memory Lane

Pramod and Mrinal grow up together, mutually fond of each other in an otherwise disciplined home, run by Pramod’s mother. Mrinal loses her parents when very young and Pramod’s father, her elder brother, turns her guardian. Mrinal lands herself in trouble when her love affair comes to light. Her marriage is arranged hastily to a stranger to save the family name.

The novel explores Mrinal’s coming to terms with loss of love, leaving her trusted confidante, Pramod and everything familiar at a tender age sucks life out of her.  She is thwarted under the burden of being a dutiful wife as she faces constant physical abuse from her husband. She delivers a still-born child and compounding to this loss, her casual confession of past love leads to her abandonment by her husband.

The journey gets worse, and the drama includes an elopement, a child, another abandonment and finally Mrinal’s descent into living with social outcasts and petty criminals. Like an ascetic, with a calm demeanor and attitude of servility, she is bent upon self laceration.

Each action drives her deep into a bottomless ocean even while Pramod tries to extend a helping hand every time their paths cross, when he is in his final year of college or during a chance encounter at a home where Pramod goes to meet his potential bride.

Mrinal’s refusal to return home with Pramod or accept any help offered leaves him devastated. A final meeting before her death that turns bitter, her difficult questions shatter him more. Pramod’s resignation from judge-ship and a promise to renounce material pleasures comes with the news of her death along with a reflection of his phony stature and how he could have been more decisive and humane.

“Today I wonder why, carrying the burden of this ‘what people might think’ upon us , we do not walk straight; why do we walk so crooked?”

Translated first in 1946 by SH Vatsyayana, The Resignation stands translated again for its sheer relevance. The quotes suggest that decades have flown by but women suffer silently from marital abuse and woes for fear of loss of identity and social abnegation.

Jainendra, in 58 years of his career in writing, explored the inner turmoil of individuals,  focussing on psychological aspects of human behavior and interpersonal relations over social issues. By delving into this unexplored theme until then in Hindi writing, he carved a niche for himself, different from his predecessor, Premchand. This is evident in the pauses and empty gazes between Pramod and Mrinal which conveys more than words.

Jainendra imparts immense importance to women in his stories, they are carriers of his philosophy. But his depicting them as fiercely independent and boldly assertive on one hand and portraying them as beasts of burden and objects of sensual beauty on the other leaves the readers in conundrum.

For instance, Mrinal though well-educated, lives in squalor in adultery with a boorish coal seller, pregnant with his child for the little help he offers. Why she fails to find a decent way of living, instead returns his favor by submitting to his carnal pleasures is a point to ponder.

The translation is taut, prose concise and Rohini Chowdhury deftly delivers the impact of the original. In the afterword, Mridula Garg states that Jainendra broke every rule of syntax and grammar, juggled verbs and crafted special words meant for restraint and renunciation; these distinct features are amiss in English.

Mrinal reminds us of Binodini from Tagore’s Choker Bali, of those who wandered and left the boundaries of a high walled, impregnable fortress erected by society and could never enter its secure, inner precincts again.