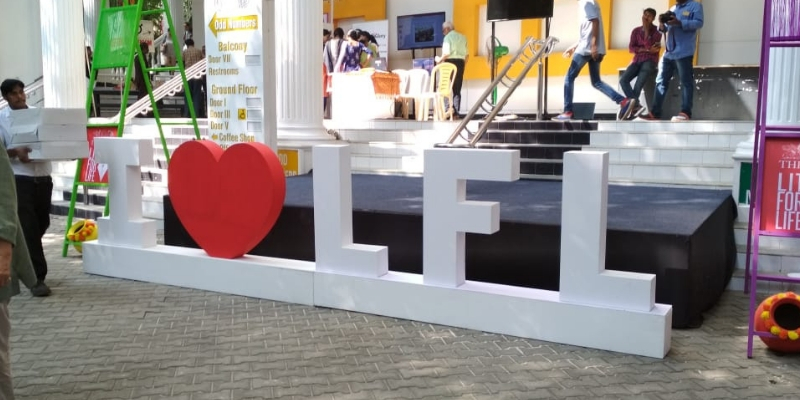 As the sun spread its warmth, dispelling the cold which has engulfed the early morning in Chennai, writers, novelists, performers, artists and literary enthusiasts swarmed inside Sir Mutha Concert Hall for the 9th edition of The Hindu LFL 2019. The theme of the three-day bonanza, often called the’sharpest literature festival in India’, is a zero waste programme, a joint effort between the organisers of the festival and Chennai-based NGO Chennai Kalai Vizha. The programme encouraged people to bring their own bottles to the venue and announced brownie points for people who use public transport to the venue.

The inaugural address was delivered by festivals director Nirmala Lakshman who introduced the festival to the eager crowd and asserted the freedom of speech. N.Ram, Chairman of The Hindu Publishing Group dedicated the Lit For Life festival to its cause.

The first session of the day began with a panel discussion on the 2019 Elections and The Future of Indian Democracy which saw Arun Shourie, N Ram, Priya Sahgal and R Jagannathan in conversation with Sanjay Pinto at the Sri Mutha Rao Concert Hall. They engaged the keen people with their views on political press conferences and about the upcoming 2019 elections. At The Hindu Pavilion, a session on Beyond Indian English: A Time for Bhashas with J Devika, Kannan Sundaram and Vivek Shanbhag on the panel in conversation with Urvashi Butalia on translating Indian works to English was held. J Devika mentioned how publishers in Kerala were not taking sufficient efforts to make translations public and insisted on translating stories that challenge the forms. Kannan Sundaram added that a book usually gets more attention only if it is first published in the US or UK. Vivek Shanbhag expressed that when a book is translated event the things unsaid in them are also translated and what really matters is the essence of the work that is being translated.

The day progressed with sessions on Lemony Snicket and on the poetry of disappearing landscapes, a discussion on Shaping the New World Order with Husain Haqqani, James Crabtree, John Keay and Suki Kim in conversation with Sashi Kumar. The session began with Sashi Kumar’s views on liberalism and democracy and posed a question about the future of democracy. James Crabtree opined that the threat to democracy is real with the authoritarian governments increasing in number but people shouldn’t lose trust in democracy because it is a good form of government. Husain Haqqani added that what we have right now are multiple centers of power in the world and America is retrenching from its position. He also said that we should try to make a distinction between what is and what we think is and we need to preserve world order, deal with rogue nations and criticise the behaviour of the new rising superpower. Writer John Keay suggested that we should try and work out China’s Belt and Road Intitative and how we can all engage and profit from it.

Post lunch came a session in Tamil on Govenance: A Responsibility, where the panel consisting of C. Mahendran, Kanimozhi Karunanidhi, S. Peter Alphonse and Thol. Thirumavalavan in conversation with S. Karthigaichelvan as they discussed reedom, safety, stability of the government and education.

Evening saw The Myth and Reality of Emperor Aurangzeb, an illustrated lecture about the Mughal emperor. The session began with Audrey explaining about how the Mughal emperor is portrayed in school text books and shared some of her research for her book. She quoted that when you fear history, you seek to control it. She also said that unlike popular myth, Emperor  Aurangazeb was considered as righteous and he wasn’t the demon we make him to be. Following the session, the Q & A section, undeniably the most heated one of the day, consisted of questions like what right did Audrey have to comment on Indian History. The inaugural day was concluded with a session on A Centenary Tribute To DK Pattamal about her music and her life.