A must read children's book: M..

“Read JNU, even if you disagree with it̷...

What are the lesser known monu..

“Read JNU, even if you disagree with it…” 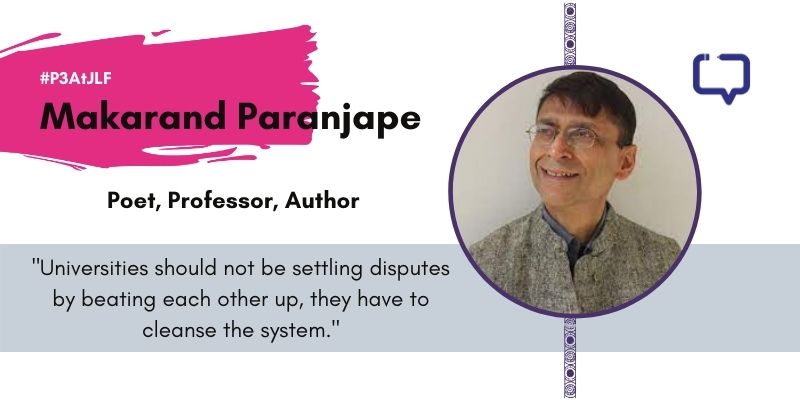 Purple Pencil Project’s Amritesh Mukherjee caught up with Makarand Paranjpe at the Jaipur Literature Festival 2022, to talk about his latest, JNU.

Please tell us what JNU, the book, is about. You have taught at the JNU, the university, for a very long time, and stood for ideas that are different from what is prevalent in that space. That must have led to some very interesting experiences. Could you please talk about that as well?

Makarand Paranjape: Thank you Amritesh, I’m delighted to be with you on the Purple Pencil Project, especially because JNU, which is my 52nd book, has just come out. I got my copy last evening and it’s an interesting book for me.

It’s very dear to me, because I didn’t even intend to write a book on JNU. I joined JNU as a professor in 1999. Before that, I taught at IIT Delhi. And when I came to JNU, I found it was a very strange place. It was in a time warp. And people (would be chanting) like Cold War slogans. And in my view, communism as an ideology and as an economic system, you might say, had failed. And yet these were people talking about communism and socialism and revolution. And what was revolution (for them)? You take a morcha from the hostel at 12 o’clock in the morning, or noon, to the Admin Building. And I said, really, you’re so lazy, you sleep at four o’clock, you don’t go to classes, and you don’t wake up before 10. And there is no protest in JNU that happens before 11pm. And this is a revolution for you? So it was bizarre for me.

I found the student politics also very negative. And all of this was nurtured, protected, reproduced, generation after generation and many faculty were involved, with a network that cross national borders.

It all came to head in 2016. As I said, I had no intention to write a book on JNU. Then there were these morchas in defense of Afzal Guru. I mean, for heaven’s sake, these people attacked the Indian Parliament, and they got due process, they went through every possible court till they went to the Supreme Court and even the President and then they say,

They would do this every year. Then the university got shut down, because of this Azadai, this so-called protest, and I said, what azadi? What azadi are you talking about? Azadi for Kashmir? Then what about the Kashmiri pandits who got driven out for no fault of theirs in 1990, why are you not speaking about them? There was this one sided rhetoric.

Then they asked me to give a talk in the “What The Nation Really Needs To Know” series. And then imagine this, the student leader Kanhaiya Kumar, he said, “Hum aapki talk chair karenge। And I said, “App kyon karenge?” because that’s a teacher’s job. So everybody was in cahoots and they had cornered me, there were 5000 people, there were placards against me. And I stood up and gave the talk.

I was basically making the point in that talk, that the University is not a platform to attack an elected government. The University is a space for debate, dissent, or discussion, no doubt. But it’s a place for knowledge, to do your reading, writing, thinking and get a degree and attend classes. Aapne university band kar di, people were sleeping in the Admin Building, there was graffiti everywhere. Thus came this book, which is an account of what happened in JNU. And for me, JNU is like a miniature India.

The transformation of JNU is also going hand in hand with what happened in India under, let’s say, Prime Minister Modi. An attempt was made to create a student movement against BJP and Modi and that failed. One reason it failed is, a few people like us, we spoke out and gave a contrary opinion, because young people get influenced easily. And what happens to younger people is they all are idealistic. So you want to serve society. And if you say नहीं, social justice के लिए करेंगे, क्रांति के लिए करेंगे, and you feel obliged, you feel enthused.

My follow up question was actually about the series of lectures that took place at JNU and the book that came out later. Yours were among the few counter opinions. Other than that, the views were ideologically very homogenous. From that, I would like to deviate to the point that in India, it’s basically just different ecosystems, each around a particular ideology? And do you think because of the sort of backlash that takes place, this system is being carried forward? For example, I’m sure you must have read that in Kerala, an institution banned right wing texts. Do you think this leads to enclosed, polarized chambers of ideologies?

Makarand Paranjape: See, I’m against the polarization of both the polity and civil society. I’m all for dialogue, dissent, debate, discussion, because that is democracy. But this polarization and the rhetoric, and also the politicization of education, I’m completely against.

And I’ve argued in JNU that some people who claim to be liberal are the most illiberal. So the pot is calling the kettle black. You say that Hindutva is intolerant, but you guys are more intolerant. If people disagree with you, you shut them down. They tried to cancel JNU as well. And that doesn’t mean that I support right-wing intolerance. I do not.

In JNU there was violence, I don’t support campus violence. There was no proper inquiry, the guilty have still not been punished. So this is what I’m against. I think that it sends out a bad signal. Universities should not be settling disputes by beating each other up, they have to cleanse the system. And India can be an educational powerhouse, but it won’t until education is so contaminated. So this book is about what I call intermedial hermeneutics that means आपकी एक विचारधारा है, आपकी एक दूसरी विचारधारा है, उनमें जबरदस्त  अंतर्द्वंद्व है। तो आप इन दोनों में किस तरह संवाद से चीज़ों को सुंझा सकते हैं और एक बीच वाला रास्ता निकल सकता है, and intermediality will also become remedial because both state and civil society need to be healed. Healing is remedial. And that is साहित्य, जिसमें सबका हित है, वो साहित्य है, वो विद्या है।

This is our culture, this is our country and we have to be India positive, not India negative. Young people need stories of hope. We should have aashawadi, or hopeful stories coming, not all this negativity all the time, and that can only happen when you are truly, truly committed to excellence. You mentioned the ecosystem, we don’t have an ecosystem. We have an echo chamber. And I always say we have a competence deficit in India along with a competence phobia. If every seat is attached to a quota, how can you compete in the world and become vishwa guru? It’s a pipe dream.

You spoke of how literature, or sahitya, is good for all. In that vein, are there any books you wish more people would read?

Makarand Paranjape: There are 1000s of books, but context is also important. For instance, if you want to talk about Hindutva, don’t get into a debate. Read what Savarkar wrote. It’s not a very long thing. But don’t just read the book, read what happened around it, read his earlier book, first Indian War of Independence, why did his opinion change? What happened? Read about Khilafat and then you form your opinion. And that is what I say to young people that read deeply. Engage with the texts yourself. Don’t go by secondary opinions. Don’t go by kahi suni, or hearsay. You engage yourself, you have the capacity and make up your own mind. I’m not for promoting some particular narrative or dethroning some other narrative. No, you make up your mind, but do it yourself. Don’t get brainwashed.

On that note, I’ll say thank you very much. Read JNU, comment on it, disagree with it, debate with it or agree with it as you like, and develop your conceptual muscularity. 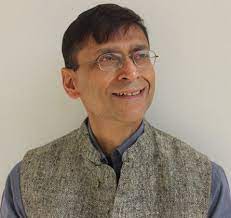 Makarand Paranjape is currently Director, Indian Institute of Advanced Study, Shimla. He has been professor of English at Jawaharlal Nehru University, New Delhi, since 1999. He also taught at the University of Hyderabad and Indian Institute of Technology, Delhi. His recent books include Debating the 'Post' Condition in India, Cultural Politics in Modern India, The Death and Afterlife of Mahatma Gandhi and Transit Passenger/Passageiro em Transito, an Indo-Brazilian book of poems. Makarand is currently a columnist for The Print and Mail Today.