Voices in the Valley by Suravi.. 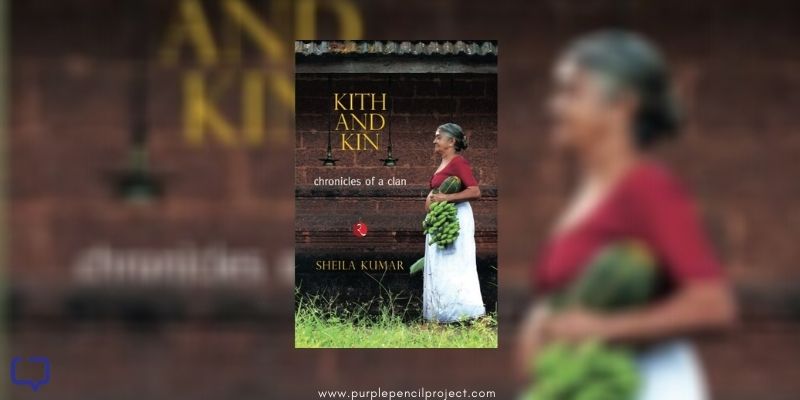 Sheila Kumar’s Kith and Kin is a collection of nineteen short stories centred on the Melekat family – an upper-caste Nair family from Kerala, all related through the matriarch Ammini Amma. In this short volume, Kumar explores how families might lead separate lives, but are ultimately bound together – in this case, by Ammini Amma herself, and the family house, Mon Repos.

How did a house with a French name become so central to a family in Kerala? We never learn, but we do see how important it is to the family. The Romantics, the first story in the collection anchors the love story of the two protagonists, Sumant and Suvarna (Ammini Amma’s granddaughter), around the possibility of buying the crumbling house.

Cracks and folds of a marriage

One running theme in this collection is how marriage – and domesticity – works against women. Rachel, Suvarna’s friend and the protagonist of Gold Dust Woman, has married against the wishes of her family – only to be disappointed in her new husband and the lack of a support system

By contrast, Poor Padmini, Ammini Amma’s daughter and the protagonist of Cast in Mourning, has had an unhappy marriage thrust upon her – one in which the loyal servant Saju was more of a comfort to her than her husband. And in Colours, we see that even when marriage can cause misery, it is also better than not being married – and that is why Beena, Ammini Amma’s granddaughter, tries so hard to find a match.

Domesticity is presented in contrast to the lives of younger women who break away from the confines of Nair society.

Ammini of Passing Through, named after Ammini Amma herself, is now positioned far away from her family and Mon Repos – in Rome’s Fiumicino Airport, in fact. Her distance may well be symbolic of the distance she feels from her family. Omana in Ants has a career and a Muslim boyfriend, but must conceal it from her mundu-wearing, kashayam-drinking aunts in Kerala. They would not be pleased with her, but little do they know that the unnamed protagonist of Guru Cool and Anita from All Those Doors, and even Sindhu and Seema in Kingfisher Morning are carrying on affairs with married men. Societal expectations sit heavily on these women’s shoulders.

Life is but a series of relationships

One result of these tensions is troubled relationships, where anger and pain bubble just beneath the surface. “All I want…is one kind word,” says Leela, another of Ammini Amma’s daughters, about her own daughter Veena. Veena, however, perceives a distinct lack of maternal affection. Veena’s cousin Karthi, meanwhile, has divorced her husband of a decade, while their daughter wishes to have as little to do with the family as possible. In On the Bench, Kumar explores themes of old age, infirmity and the stresses they place on family bonds. And when it is finally time to let go of the house and possessions, we find ourselves asking, like Dev in Must Everything Go, if it was worth it all.

The parts and the whole

Centering the stories in Kith and Kin on the family of Melekat Ammini Amma and their house was a terrific idea – Indians love their big joint families, and it’s always exciting to see how different family members go about their lives. Many families, my own included, define themselves in relation to a now-deceased grandparent or great-grandparent.

It is also wonderful to see the stories grounded in everyday life in Kerala, with puttu-kadala for breakfast and long drives on the highway to Kochi and the sun setting on the Vembanad Lake. Kumar is unapologetic about using Malayalam words, and there is a helpful glossary at the end of each chapter.

The trouble, however, is that Kith and Kin falls short of being truly pathbreaking. For instance, in Cast in Mourning, Kumar hints at caste bias (a forbidden romance with a Brahmin) and class bias (a prejudice against a beloved domestic worker), but does not explore them in any great depth. At many points in time, the characters’ motivations are only hinted at, but not examined any more. Why does Veena struggle in her relationship with her mother in Locked in Step? Why are Sumant and Suvarna in the Romantics and Closure so inextricably bound together? Does Beena from Colours ever get married? What’s up with the Ghost – Veena’s deceased daughter-in-law? And who was Ammini Amma, the matriarch of the Melekat clan, with no more than a few lines in this book?

On the whole, I would recommend Kith and Kin for Sheila Kumar’s imagery of Kerala as it is today. This is a book with immense potential, and I do look forward to reading more of the author’s work.

Beena then embarked on an intense relationship with the blood-red poinsettia next to the mussanda. This one, she knew for sure, would be for keeps.