Five Novellas About Women By I..

Simran Dhir: ‘I love that Delhi has a deep, visibl...

Simran Dhir: ‘I love that Delhi has a deep, visible history’ 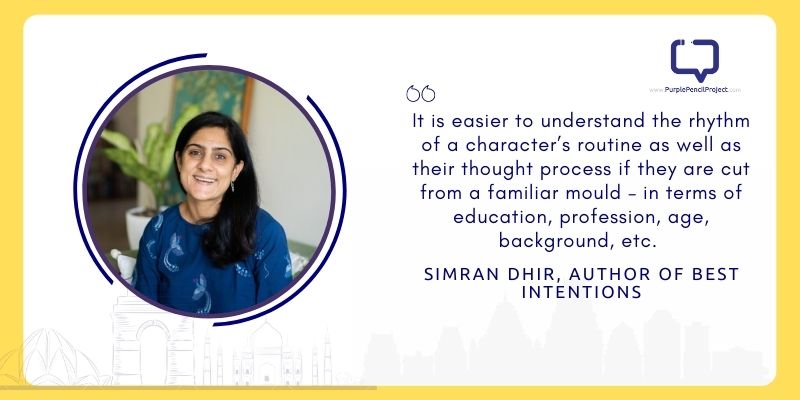 Edited Excerpts from an interview with author Simran Dhir.

“And as for Delhi, the city continues to blossom with bouquets of bright bougainvillea, champa and laburnum in summer; flood with water and traffic in the monsoon; and unhappily hide beneath the cover of grey smog in winter. Seemingly unchanged but ever-changing, it absorbs the corruption, the violence, the scandals, as well as the triumphs, love and celebrations, and finds a place for them somewhere in its long history.”

Writer and lawyer Simran Dhir’s recent debut novel Best Intentions (HarperCollins, 2021) is the story of a family in Delhi set against the backdrop of law, justice, politics and corruption in today’s India.

Simran graduated from National Law School of India University, Bangalore and worked in London and Munich before returning to India to practice competition law. Simran lives in Delhi with her husband and son.

In this exclusive interview, she tells us among other things about being a lawyer and writer, the book’s setting in Delhi, and the challenges of writing a family drama with varying public themes.

You are a lawyer by profession. Tell us how you decided to make your foray into the world of writing fiction with your debut book Best Intentions.

Simran Dhir: I was on a break from work in 2014 when I started to visit a library each day as routine. I would read and study there, and particularly enjoyed reading from the history section.

I have always been a voracious reader, but this was also a year when I decided to read many of the classics that had been on my list – I read Tolstoy and Henry James and Naguib Mahfouz, and many others.

So, the space in my head created by taking some time off work was filled with the characters from my novel – it seemed to happen without too much of effort from me. Gayatri took form as a lawyer-turned-historian, and the rest of characters grew around her.

The book’s protagonist, Gayatri, and many of its other central characters, are trained lawyers. How much of Gayatri’s character and story is influenced by your own life, or people that you know? What are the challenges of writing something you know so closely? Does it require disguising real people? Have any of your friends, family or colleagues recognized themselves in your book?

Simran Dhir: I don’t think there is any character or part of the story that is specifically influenced by my life, although it is definitely easier to understand the rhythm of a character’s routine as well as their thought process if they are cut from a familiar mould – in terms of education, profession, age, background, etc.

My work does not involve the kind of work that criminal law litigators (Akshay and his father do), so that was fun to write because I did explore a different side of legal work.

I didn’t base any character on people I know, so (thankfully!) there has been no one asking me if any character was based on them.

The story has a strong setting in Delhi, and refers to many of its popular landmarks. Tell us more about your personal connection with the city.

Simran Dhir: Even though I have done my schooling and college primarily outside Delhi, it is still the city I am most familiar with and where most of my family and friends live.

I love the fact that it has a deep and visible history – I have spent many afternoons (particularly when I was younger) exploring the city and its monuments.

I also love the spectrum of seasons in Delhi – I even love summer here, where the most beautiful colours rain on the city in the form of semals, gulmohars, amaltas, bougainvillea and so many more.

I have recently moved back to Delhi from Bangalore after five years, and I am really enjoying getting to know the city once again!

On the one hand, the book is a kind of family drama, about love, marriage, separation and divorce. On the other hand, it deals with public ideas such as law, justice, politics and corruption. How challenging was it to combine all these varying themes into one novel?

Simran Dhir: It is said that there are two kinds of writers – plotters and plungers. I’m in the latter camp – when I started writing, I just had a vague sense of the key characters: Gayatri, Akshay and Vikram, and knew that Gayatri would end up with one of the other two (I was open minded about whom).

As I started to imagine these three people, I started to think about their families and colleagues – Mr Grewal and Neelam, Nandini and Amar, Sadhuji and Farah, and these people developed their own little sub-plots, some even surprising me with their outcomes!

The one idea that I think combines the two sides of the story you have pointed out is a sense of a gap that many liberals like Gayatri feel when faced with the political realities of the world we live in today – where it may be instinctive to have a knee-jerk reaction and reject everything that doesn’t agree with one’s ideology, without realising that this reaction may be as silly as everything one criticises.

Who or what are some of your biggest literary inspirations?

Simran Dhir: I love romances, novels of manners, particularly those where the world of the protagonists’ is fleshed out interestingly. I enjoy TV series with such stories as well. Also, I spent the year before writing reading many classics that I had always meant to – including Tolstoy, Henry James and others.

I think reading since childhood is the single reason I was inspired to write a story of my own.

Contemporary authors whose work you admire, and all-time favourite books?

In terms of contemporary novelists, I admire Vikram Seth and Vivek Shanbhag immensely.

What are you working on next?

Simran Dhir: It’s not been easy to write during the pandemic, and I have had to focus on the editing of Best Intentions as well, but I am starting to write another novel – also set in Delhi but with a different cast of characters.