Samskara: A Rite for a Dead Ma..

Legend of Suheldev: The King W.. 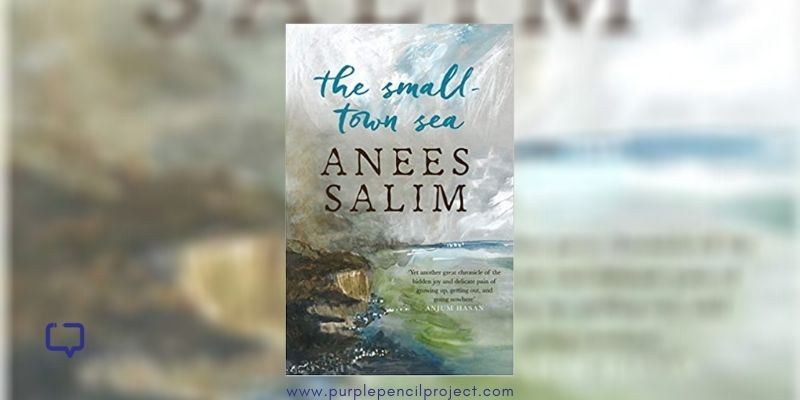 “You should walk either ahead of me or behind me”, he said.

“You should learn to walk alone”

Unlikely advice for a father to give to a thirteen-year-old son…. but it captures the background against which The Small-Town Sea written by Anees Salim, and published by Penguin Random House India is set.

The Small-Town Sea is the coming-of-age story of a (unnamed in the book) thirteen-year-old boy who is forced come to terms with unprecedented changes in his life.

Narrated in the form of a letter (epistolary) written to a literary agent named James Unwin, it captures the unfiltered thoughts of the teen, whose quirky, innocent perspective on even the grim reality of death, adds a dollop of dark humour.

The places, like the protagonist, are left nameless, giving it a universal flavour.

The troubles of our boy begin when his father decides to leave city life and shift to his home town by the sea as he wishes to die listening to the sea he had grown up by. His son, our protagonist, is therefore left with no option but to be uprooted from his home and friends.

He tries to get accustomed to the new circumstances and small-town lifestyle. He even finds a new friend in Bilal, an orphan and together they have their own set of adventurous and expeditions.

But, while the boy was trying to sail through his new life, the sea and sea-town had many challenges in store for him, a life he which he wasn’t ready for. People whom he had believed would stay forever, desert him in his journey, and his left on his own to make sense of this world from a young age.

The sea in The Small-Town Sea

The story of the boy captures the heart, and the sea who presence punctuates this story at all times; sometimes as an ally, sometimes as a nemesis, always a silent witness to the boy’s life. In fact, the very reason the boy gets uprooted from city life is because of his father’s fascination for the hometown sea. The first venture of the boy to the sea happens when Kunjumon, a fisherman, an old classmate of his father insists on taking him for a sail in his boat.

Contrary to his father’s, the boy’s reaction to the sea is rather lacklustre. He cannot conjure why people travell across the world to walk its shores and what is so fascinating about it’s sound that his father wanted to die listening to it.

“All people who died mid -voyage don’t drown, some die of boredom.”

“The best part of the sea is where it meets the land. The rest is like those big rolls of flower-patterned curtain cloth: if you have seen a square centimetre, you have seen the whole bundle.”

Having said that, some of the boy’s fondest memories about his father were their walks by sea shore and their discovery of a “secret beach”. He even had long term plans.

Since we were the ones who discovered the beach , we had every right to call it by the name that pleased us, I had already decided to name it after Vappa, but not when he is alive, A few days after he died I would come here and write his name on the sand where the sea would not wipe it off.

Once in his dark moments he thought about the sea as a helpless witness, as an unfriendly neighbour:

As we drove through the dark and dripping town, I began to feel that it was the sea, not the convoy of cars that was going away. Since that day I thought of the sea as an old neighbour who decided to disappear without waving goodbye over the fence, let alone slipping in through the stile for a farewell hug.

The adventures as well as the stories Bilal and the boy build around the sea are a delight to read and bring an invariant smile.

The best part of the sea is where it meets the land. The rest is like those big rolls of flower-patterned curtain cloth: if you have seen a square centimetre, you have seen the whole bundle.

The Small-Town Sea has an innate charm and at the same time it tugs the emotional strings of the heart. Salim crafts the story expertly; the detailing is vivid and the nuances beautiful. The escapades of the boy have a warmth of nostalgia but at the same time his helplessness and unspoken words evoke melacholia. I really enjoyed reading this book; it has a rythm like the waves of the sea, which consumes you completely.