Anuradha Kumar’s Coming Back to the City Sto...

Anuradha Kumar’s Coming Back to the City Stories 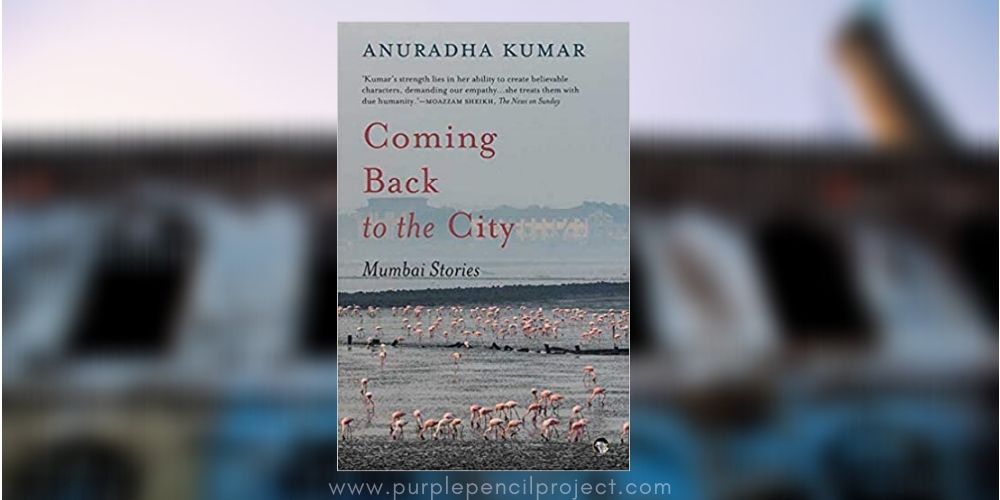 Mumbai is the city of dreams, shattered, unfulfilled and soaring. Many a bright eyed dreamers find their way here with hopes of making their fortune. As someone who’s a second generation Mumbai resident born at the cusp of the 21st century, the Mumbai I grew up seeing has always been glitzy, an urban jungle of skyscrapers that kiss the skies.

But the Bombay of then, as portrayed in Anuradha Kumar’s Coming Back to the City Stories, is a beautiful paradox. She draws her readers into the lives of the rich and the poor, whose destinies are inextricably intertwined and creates characters who seem to be facing inner demons that they may or may not conquer.

Acceptance is a key human need. And acceptance only comes with love. We see almost all the characters in the book struggling and longing for love, although the paths they choose vary.

Pooja, who plays an important role in Anuradha Kumar’s Coming Back to the City Stories, seeks the fulfilment of her marriage, she wants a child. But her shaky relationship with her husband Mahesh, who is constantly carrying the weight of debt to the politician Ghatge, leads to her living her life as a “barren” woman.

Neera Joshi, a retired journalist of great caliber, continues to mourn the loss her love, a married man she was briefly involved with. Her life is entangled with that of Sneha Desai, a popular radiologist who, after seeing the wreck of Neera’s relationship, is sure that she will never get involved with a married man, but is unable to resist the thrill of a clandestine affair.
On the other end of the spectrum is Vasudha, whose sense of self-preservation leads her to make some unconventional decisions including leaving her young daughter behind in search of a more fulfilling life.

None of the characters are black or white. Anuradha Kumar creates complex, multi-dimensional characters, each with underlying issues and motives backing their actions.

The most fascinating of them all is Ghatge. In the beginning, he comes across as a sleazy politician-goon who has his fingers in one too many pies, who all the female characters in the book encounter at some point. He is secretive and has a constant need for control and we later find that this is because he has no power in his own marriage. He also carries out covert affairs with two of the female characters in the story and exhibits clear signs of overcompensation, wile trying to maintain a façade of power. And it is only at the end of the story that we see his character unravel.

Similarly, Mahesh, who is Pooja’s husband and Ghatge’s right-hand man, is originally suspect of physically abusing her. But we soon discover that the cracks in their marriage aren’t those of abuse but rather of feelings of inadequacy. Mahesh is painfully aware of his wife’s beauty and his own lack of which leads him to keep her at an arm’s length. Although a seemingly brash man, he takes no pleasure in the action that he is forced to commit and longs to be free of Ghatge to live a happy, peaceful life.

The Mumbai we see in Anuradha Kumar’s Coming Back To The City, is not an urban jungle. We see that it is not the landscape that makes up the city but the flavour added to it by the myriad of people who call it home.

Kumar takes her readers on a trip down the memory lane to the late 1980s when the mill worker protests hit a crescendo. The setting of her book is in the backdrop of one such mill that was shutdown and the residential chawl area inhabited by the families of the mill workers.

This Bombay is a kaleidoscope of disimilarities, as the characters all come from different socio-economic backgrounds. The city is a juxtaposition of the decaying and the brand new; the sprawling High Street in Lower Parel is only a stone’s throw away from Jupiter Mills, the primary source of conflict.

There is also a steady struggle for preservation of the old days as Ghatge tries in collusion with some high profile builders to demolish the rundown residential area and building sprawling complexes in its place for a steep profit.

Anuradha Kumar’s Coming Back To The City is a narrative in motion, there is constant growth and change in the characters and their lives. And as readers, we are easily swept up in the tale, eager to find out what happens next. Kumar obliges her readers, the book has no conclusive end as she leaves us to ponder the fate of the characters.

It was bad, especially at night. For it never truly got dark, the stars vanished; instead, a burnished purple and orange took their place. The billboard flashed, the sky itself became a mirror, playing the myriad colours back, swirling through his glasses, making his head swim.”

This book is recommended for readers who enjoy the joy of turning over sepia hued pages of history. And since we’re on lockdown, you can get the ebook here.

Recommended for: Anyone who has lived in Mumbai, no matter how long. 16+ years of age.

Suggestions: Read this, and follow it up with Amrita Mahale’s Milk Teeth, which is currently among the free books on Kindle Unlimited.