Secret Notes from Iran: Diary of an Undercover Jou...

Secret Notes from Iran: Diary of an Undercover Journalist by Nadim Siraj 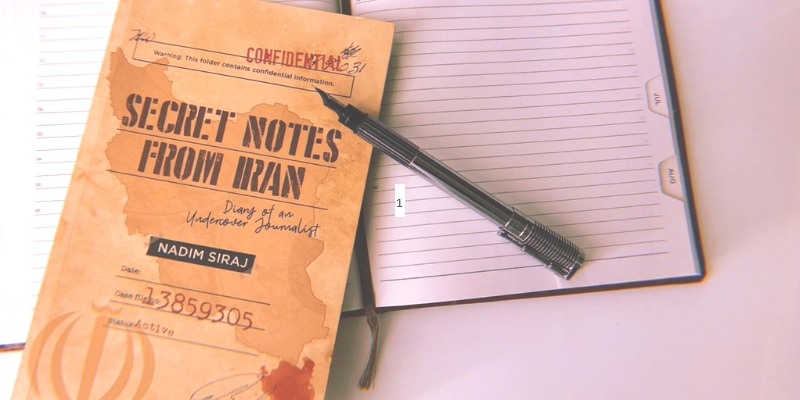 International affairs is very much run like the mafia. The Godfather does not accept disobedience, even from a small storekeeper who doesn’t pay his protection money. You have to have obedience; otherwise, the idea can spread that you don’t have to listen to the orders, and it can spread to important places.

Noam Chomsky’s words hit the nail right on the head, especially when taken in context to Nadim Siraj’s Secret Notes from Iran, on the intricacies of Iran and its politics, essentially in relation to its equation with the United States of America.

Siraj’s experiences in Iran as an undercover journalist interested in West Asian oil politics make up the essence of the novel. He has covered the maladies that plague many countries including the socioeconomic collapse of Greece, life in pre-revolution Egypt, the post-Apartheid scene in South Africa, urban poverty in Kenya and Nepalese life under Maoist control. His travels, interaction with the people of Iran, and his impression of Persian hospitality are a far cry from the militant, tyrannical image of Iran that has been sold to us by the Western media. The book unfolds through nine chapters in which Siraj tackles the myriad of international and national maladies that plague the country.

Iran sits on one of the biggest oil deposits in the world, a boon and a curse for the country and its people. A boon because oil and petroleum are its primary source of income. But a curse too because it has also lodged the country in the midst of a tussle between the powers of the West for monopoly over its resources.

The United States, with its history of international interference, happens to be one such country. Similar to its stance towards Iraq, Libya, and Syria, the United States has consistently attempted to meddle in the internal governance of Iran going so far as to further its own agenda through a President who allied with them. There are multiple instances in Iranian history where the US government has tried to interfere in the country’s domestic matter, the more recent one being American President Trump’s sanctioning of international trade with Iran and having it listed as a hostile nation. Iran’s refusal to be bullied by America and its contemporaries has only served to make this situation worse.

America’s Ego and the Petrodollar

Siraj further delves into the intricacies of the ongoing strife by elucidating on the OPEC country which have a huge monopoly over the global consumption of oil and fuel resources. Until the 1970s, the trade for these precious resources was carried out in dollars (also known as petrodollars) which served to strengthen the value of the American currency in the world and thus boost the US economy.

Iran’s shift to other currencies like the euro and the yen was a blow to America’s economy and ego, prompting them to deem it a hostile terrorist country. They have also been accused of spreading false propaganda and slandering Iran and its people in the media of the West. Iran’s trade relations with a number of countries have been weakened by US pressure and this had led to a lot of resentment towards the latter in Iran. The constant fear of becoming victim to an attack at the hands of the American forces and their allies has made the people angry and paranoid.

During his visit to Iran, Siraj observes that all of the brands and franchises present in the Persian country are indigenous, there are no KFCs, McDonalds, GAPs or  Sephoras. This is a testament to Iran’s stand on the colonization policies of the West.

Despite its deceptively calm facade, Iran is a land of brewing revolutions. Its history is littered with stories of coups and political upheavals. Siraj delves into the political history of Iran and talks about the last Shah of Iran being run out of the country by the now Supreme Leader Ali Khamenei.

The stark shift from liberal Iran under the Shah to the uber-conservative one under Khamenei has not been an easy one for the people. The restrictions thrust upon them by their government, especially on the mobility and conduct of women has left the newer generations restless. This has led to a spur of new movements championed by women like My Stealthy Freedom which later spilled out on the streets of Tehran. There also seeds of discontentment rising from poverty, unemployment as well as fear of war.

Iran’s relationship with other countries of the world has also shifted, its primary alliance being with China and Russia both of which have made huge FDIs into the Iranian economy. The western countries fear the impact the communist propaganda of the two threatening powers will have on Iran’s policies as they believe it is in their better interests to have the Eastern countries under their thumbs.

To assure this, the Western media is primed to slander the governance of Iran with accusations of terrorism, human rights violations and other volleys of crimes. But Siraj is not buying it. He talks about his pleasant experience as a tourist in Iran, the lives of the common people and more so, their alarming similarity to the rest of the world.

He encourages us, the readers, to see past our westernized mindsets and identify the real victims. Regardless of who is at war with whom, the rich never lay their lives on the line. It is the common man who must stand as a shield against fire. Here too, in America’s greed, the ones falling prey to it are not men like Khamenei with their billion dollar pockets but the people of Iran, men, and women like the rest of us.

Traditional tea and snack joints found everywhere all over Iran, make for a magical experience. It is as if these places run on time machines – the decor, looks-and-feel literally teleports you to the days of the ancient Persian Empire the moment you step in.

An informative read. 3.5/5. Full of factual information and numbers, the book will certainly charm readers of current affairs and non-fiction. But for someone who enjoys fiction, Secret Notes from Iran may come across as a cut and dry read. Get the book here.

Readers of political and factual non-fiction, interested in global issues.

Pankaj Mishra’s Bland Fanatics Reeks of the Accusations It Makes. Here’s Why