After Yesterday and other stor.. 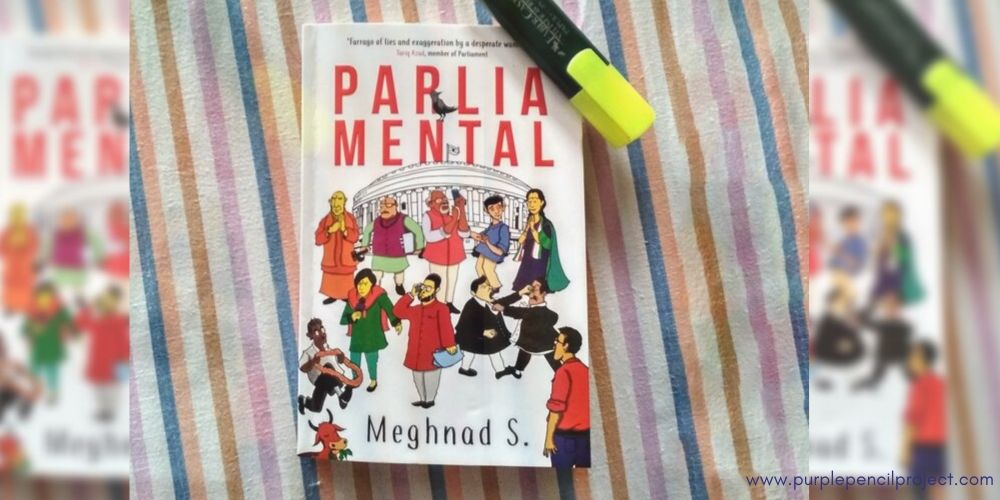 When was the last time you watched the proceedings of the Parliament on the Lok Sabha or Rajya Sabha TV?

“Who watches TV, right?” And who watches political news from where they actually happen!

Rarely does footage from these Parliament proceedings go viral on the internet or trend on Twitter (though TV debates around it will).

Parliament is, theoretically, the place where democracy and governance thrive, where debate and discussions are carried out for the greater public good. Theoretically.

Parliamental is a satire (the sarcasm evident from the title and the pristine white cover), written by popular columnist and public policy professional Meghnad.

One can’t help but remember the title of Meghnad’s show which also had a canny title “Consti-tution”. Wasim Helal’s thoughtful cover with simple illustrations of the Parliament in the background and the primary characters of the novel, resembling the current politicians, adorn the front, with quotes from the characters used as endorsements and testimonials.

Debutante politician Prabhu Srikar of the Rashtrawadi Janata Manch party is elected, surprising everyone, to the Parliament from the Nagpur Constituency.

Raghav Marathe, an English graduate joins Prabhu Srikar as his Personal Assistant and public policy analyst, moving with him to the capital city along with Jeetu, Srikar’s trusted aide and cook.

Together they stride the corridors of power where they learn that politics and idealism are always at loggerheads. They face nepotism and deception, backstabbing and more. Or, just the usual you know.

When his initial attempt at a rousing speech against the Financial Bill containing a clause that makes political funding non-transparent backfires within his own party and fellow legislative members, Prabhu Srikar decides to lie low for the rest of his career. Raghav Marathe who scripts Srikar’s speeches, uses them as a vehicle to vent, using his Twitter alter-ego, @Arnavinator, about what happens behind the closed doors of the Parliament.

However when the ruling party tries to pass the Social Media Regulation Authority Bill in Parliament that could hamper freedom of expression, Srikar and Raghav are joined by an inquisitive journalist, Nikita Gohil, working with the Daily Plug, a fagged lawyer specialized in Constitution Law Dushyant Sinha, and a soaring You-tube star Helen Anil Khan to resist the controversial bill through social media. They encounter death threats, deceit and realize dreadful truths about scams while battling this dubious bill. The resulting brouhaha forms the rest of this compelling tale.

The hashtagged titles of each chapter reflects the author’s interest in twitterverse (where he has been nothing short of a celebrity) and intrigues the reader from the start. The sardonic footnotes that break down catchy desi words are hilarious and remind us of Meghnad’s introduction “Kya aapki democracy mein namak hai?”  in his “Consti-tution” show. Take these for instance:

KARYAKARTAS: Political party workers who are swept away by the belief that a particular political leader will be their salvation.

CHAI: The most popular beverage in India after Coca-Cola and sweet corn soup.

The book has its fair share of these, establishing Meghnad as a comic voice Indian writing needs desperately.

The plot, neatly woven around minimal characters, picks pace with the introduction of a Social Media Regulation Bill.

The broader narrative revolves mainly around Raghav, the cynical millennial-turned-policy analyst, often frustrated with the constant mention of his father’s death, and Prabhu Srikar, owner of a CA academy in Maharashtra and a first time MP.

The narrative is simple without being simplistic, the language flows smooth.

The subtle, laid-back first half of the novel clearly etches out each character, introducing us to the ways around the Parliament and along the way educating us about the labyrinthine details of its working, while revealing some harsh truths about legislative functions, all without resorting to convoluted jargon (in the hands of a less talented writer, this could have turned into a civics textbook).

But it’s the racy second half that keeps you hooked, constantly revealing unexpected sides to each character and connections to scams and frauds.

However, the climax felt rushed, with little resolution of the secondary characters.

There are parallels to contemporary happenings in the Parliament, such as the Rajya Sabha TV blackout that took place on July 10.

The book, though educative about the importance of constant vigilance about legislations, never turns preachy and therein lies its success. Meghnad takes us through the corridors of power with a unique and relatable tale giving us moments of side splitting laughter. It is a must-read book.

“Always remember that selfless deeds are collateral damage of selfish deeds. Nobody would do anything if it’s not driven by self desire.”

Recommended for: All readers especially those who want an introduction to the intricate workings of our Parliament.
Final Verdict: 4/5 – Go to a bookstore and buy it. Pay those extra bucks. Suggested Readings: Hear Meghnad’s podcast  “How to Citizen” and watch his show “Consti-tution” on YouTube.