I'm So Hacked by Gautam Mayekar 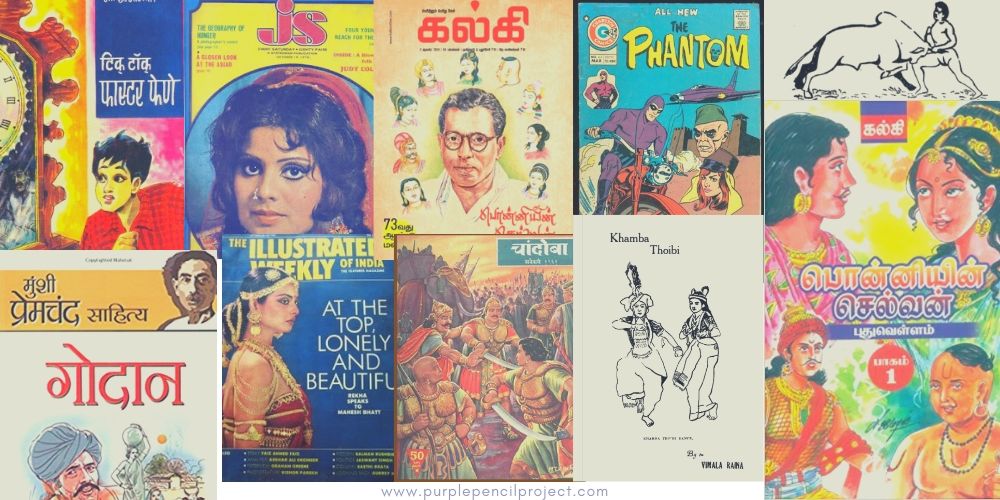 A shift from Indian to Western, more magazines, and the inclusion of a semi-modern reality – Indian literature post independence bloomed from a black and white canvas into a multi-coloured billboard of different genres and styles, both entertaining and enabling.

In a previous post, we spoke to some of our grandparents and the stories they grew up reading, so naturally, we were curious to find out about the literary inheritance and interests of the next generation, our parents, and the developing era that was their childhood.

Let’s dive into the archives and discover what the 70s and 80s looked like, on the bookshelf.

Poetry was a popular form of expression during this time as is evident from the nostalgic memories of our parents, which have now turned into old songs and nursery rhymes for the millennials.

Born and brought up in Mumbai, Vishakha Kulkarni, 53, recollects, “As a child I remember reading popular poets like Vithal V.D. Karandikar, Mangesh Padgaonkar and Shanta Shelke. They were among the many popular poets for children.”

“I remember all the poems of all the grades I studied in,” claims 48-year-old Brijesh Kumar Singh, a Hindi teacher, who grew up in Ravaniya village of Uttar Pradesh. “The evening sessions at school usually contained a student reciting numbers from 1 to 100 or reciting poems. ‘I liked Jaishankar Prasad’s poems the best, as well as those of Dwarika Prasad Maheshwari and Ramdhari Singh Dinkar in school.”

What was also special is the diversity of dialects he read in everyday life; like Surdas’ works (such as Sur Sagar) which were largely in Braj Hindi, while Tulsidas’ in Avadhi, both being dialects of Hindi.

When was the last time you read anything about God? For very long, religion was the sole inspiration of literature; romance came much later.

Mr. Singh recalls that he enjoyed the works of Surdas, Kabir and Meera, who, along with Tulsi and Rashkhan, wrote about God, and was fond of literature from the Bhakti era, which spanned nearly 350 years, between 1300s and 1700s.

Actor Kishor Bhanushali, 56, born and brought up in Mumbai, shares, “In my locality, sessions of story-telling about Santoshi Mata were held every Friday. I would always attend and listen to these stories. In the month of Shravan, my baa (grandmother) would read us stories, so I would always sit to hear her. I would enjoy both, listening to and reading stories.”

The development of English as a language and accessible translations opened the gates for the arrival of Western Literature for many parents, and thus began the eclipsing of Indian Literature.

65-year-old Salam Joyshanker Singh, who grew up in Imphal, Manipur recalls, “We were made to go to the library every day. I wasn’t interested in reading initially, but eventually, it became a routine. Much later, I started reading on my own, works of authors like Enid Blyton, James Hadley Chase, Robert Ludlum, Mario Puzo, PG Wodehouse and Barbara Cartland. I can also recall reading Nancy Drew, comics like Tintin, Archie, Mad and a magazine called Junior Statesman.”

Thoidingjam Purnima Devi, 59, also grew up in Imphal, Manipur, and had more mainstream interests; namely, magazines like Seventeen and Vogue.

Ms. Kulkarni’s childhood also consisted of comic books like Phantom and Mandrake, written in English and translated into Marathi.

“I was fond of comics like Modesty Blaise, Phantom, Mutt and Jeff,” says Mr. Bhanushali.

“We had these small books of say 25-30 pages like Gulbakavliche Phool, Udta Ghoda, which contained many stories. Most of them were the Indian versions of Arabian Nights. I also read Faster Fene, a book called Ajibaicha Goshti and many stories about Birbal,” recollects Ms. Kulkarni. She also enjoyed reading magazines like Kishor, an illustrated magazine, containing small articles, stories and poems.

“I remember reading Khamba Thoibi, a Manipuri folktale, and Urirei Madhabi, which was a novel,” shares Mrs. Purnima Devi.

Mr. Singh’s vast reading in Hindi also comprised renowned authors of Hindi Literature such as Munshi Premchand. “His novels like Godaan, Gaban, Karmabhoomi, Rangbhoomi, Sevasadan. I also read Jaishankar Prasad’s Kamayani. He became very famous because of this book. My favourite novel was Godaan by Munshi Premchand, whose novels usually portrayed the existing social and political situations. They were set in the immediate post-independence era. I was introduced to these authors in school through small poems and a few extracts from their novels. It sparked my interest. In order to read more of their works I would try and find their books to read. Most of the times I would buy the small books. A book cost approximately Rs 10-15,” recalls Mr. Singh. “I still read. I now read books related to history in Hindi and dharmik pustake (religious books) like Bhagwad Gita and Ramayana.”

62-two year-old Rama Rajamani, grew up in Mylapore, Chennai, and read substantially in Tamil. “In college, we borrowed from the library. I would read fiction, comics, novels, magazines, newspapers, the whole lot. The newspapers were available in both English and our regional language, Tamil. “Mangayar Malar was a Tamil magazine that I read. Tamil weekly magazines like Kumudam, Ananda Vikatan, Kalki and many more had interesting stories in them. They would have serialised stories. Novels in Tamil like Kalki’s Ponniyin Selvan were a favourite. It came as a continuing story in the Kalki magazine and later on was published as a novel,” says Mrs. Rajamani, bringing back her linguistic childhood and regional roots to the surface.

“Magazines like Tinkle, on the other hand, made for light reading. But my favourite genre of all was current affairs. India Today and The Illustrated Weekly of India by Khushwant Singh in English were what I loved to read. The latter contained stories as well as news on social issues. Back in Chennai I read Hindu and after shifting to Bombay I now read Times of India regularly. I also read magazines like Filmfare,” supplies Mrs. Rajamani.

“A patrika (magazine) issued by Indra Kala Sangeet Vishwavidyalaya used to be delivered to my home on a monthly basis,” says Mr. Singh. “It contained facts about music like, what is classical music, what is western music, about ‘raag’ and ‘taal’, the musicians, their jeevni (their life story/biography), their music.”

Tales of our forefathers became the tales of our parents and survived through the yesteryear; still in vogue decades later. Ms. Kulkarni remembers the famous poem Anandi Anand Gade word by word and recites an extract of the same! It can be heard in the voice notes attached below. She also read the magazine, Chandoba. “Another acclaimed Marathi author, P.L. Deshpande, was famous for his songs like ‘Nachre Mora’ which is very popular to date,” shares Ms. Kulkarni.

“Chakram and Chandamama were my favourite,” reminisces Mr. Bhanushali. “Although, despite saving up, getting my hands on Chakram was difficult as the magazine cost 12 annas, so I would have to resort to borrowing. Chakram ma bov masalo hato (It was full of entertainment). Sometimes the raddi wala would give away a few books to read. These books had stories for little kids like Vikram and Vetaal, etc.”

Indian literature post independence was filled with socio-realism, as authors like R.K. Narayan, Mani Sankar Mukherji, Satyajit Ray, made the common man their heroes, and the troubles and joys of everyday life, their grand epics.

The parables and poems from Indian literature post independence shaped how India read, and remembered the making of a new nation.

Summaries of some of the works mentioned:

A series of twenty books, Faster Fene, revolves around the many adventures of the protagonist boy whose name is Banesh Fene. He is always involved in solving mysteries and finds himself amidst dramatic situations and troubles. Most of the books have Pune as a background drop.

This novel is a Manipuri classic that revolves around the love story of Rajkumar Birendrajit and Urirei. However, the title is based on another girl, Madhabi, who sacrifices everything for her love. In this sense, this novel is a tragedy. A series of events separate the two young lovers, who happen to reunite in the end, whereas Madhabi is never seen again. A comparison between worldly love and spiritual love can be derived from the book.

A historical novel written in five volumes, the story revolves around the Chola Empire and the power struggle to ascend the Chola throne. It depicts the early days of Arulmozhivarman, who went on to become the great Chola king, Rajaraja Chola I.

This novel is considered to be a classic in Hindi Literature and focuses on the peasant class of rural society. The story revolves around Hori Mahato and his family members which includes Dhania (wife), Rupa and Sona (daughters), Gobar (son), Jhunia (daughter-In-law). Hori is a peasant who dreams of owning a cow. To procure a cow, he takes a loan and other happenings around the same go downhill, resulting in his death due to excessive labour to pay off the many debts incurred by him to restrain the consequences of those circumstances. His character is shown as honest and dutiful.

Chakram Chandan is a weekly magazine, very popular in the Gujurati community since the last six decades. It contains feature stories, crime stories, social stories, lifestyle articles, among many other things. It caters to all age groups.