Howling at the Moon by Darshan..

Fools and Other Stories by Njabulo S. Ndebele

Do Androids Dream of Electric ..

Fools and Other Stories by Njabulo S. Ndebele 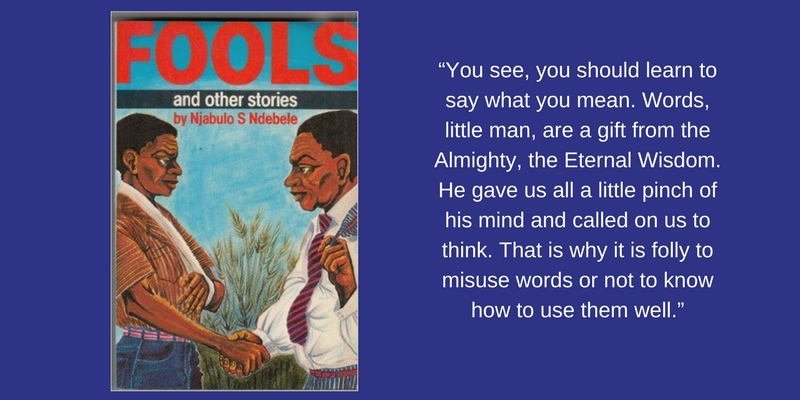 For a long time, I wanted to right about the streets of my childhood, our games of summer and rains, my poverty and my perception of it. I have still not been able to pen down anything without it sounding like a chip on my shoulder I need to get rid off very quickly. But in Thoba’s story, in the Africa of 1960’s, about a boy stuck in sudden showers of rain while playing football with the children of his street, I saw the story of the 90’s kids, of underlying competitions between people and the social groups and circles it created. It reminded me that childhood is universal, so is adolescence and the troubles that come with it. When you’re under 16, removing your shirt and chasing the winds like a horse is the most heroic thing to do. And sometimes, the shame that follows is worth it.

“Thoba envied these boys. They seemed to not have demanding mothers who issued endless orders, inspected chores given and doe, and sent their children on endless errands. Thoba smiled, savouring the thrill of being with them, and the joy of having followed the moment’s inclination to join them on the veranda.”

“Yes, indeed, Mpiyakhe was stealing glances at him too. But now that there were only the two of them, there really seemed no reason to quarrel.”

Sometimes when I walk home at night and imagine all the dreadful things happening to me, I am scared. Not of those dreadful things, but what my parents will say to that. And when some dreadful things do happen to me, I keep them from my parents, knowing that they will be affected deeper than I, and I can carry social burdens they never thought possible.

The Prophetess brings the magic of ancient Africa and the hymns of yore to a small boy who has come with a bottle of water, so she may bless it and he may use the water to cure his ailing mother. He walks home scared, and in the darkness, drops the water. Filling the bottle with regular tap water, he returns home. He prays for the water to be blessed again, and the mother’s faith in the Prophetess is unwavering. Is belief enough to bring magic into our lives?

“And that’s our problem. We laugh at everything, just stopping short of seriousness.”

“You see, you should learn to say what you mean. Words, little man, are a gift from the Almighty, the Eternal Wisdom. He gave us all a little pinch of his mind and called on us to think. That is why it is folly to misuse words or not to know how to use them well.”

The first two stories showed what revolution would mean to young kids — defying their parents, lying to their mothers. Uncle is a transition story, where a small kid, whose uncle comes stays with him, is introduced to ideas and events that happen beyond his immediate geography and awareness. His uncle is a trumpet playing piper, who reads and learns new languages so that he may rebel but now without a cause. He plays the trumpet, picks a fight with street goons, tells his nephew of the importance of fire and passion, of history and language and of knowledge. And the story holds snippets of wisdom for mshana and the reader. He learns about desire and women, about the need for music. He doesn’t realise it yet, but little mshana learns that there are things in life more important than showing off your own uncle to your friends.

“This whole land, mshana, I have seen it all. I have given it music. You too must know what you can give it. So you must make a big map of the country, your own map. Put it on the wall. Each time you hear of a new place, put it on the map. Soon you will have a map full of places. And they will be your places. And it will be your own country. And then you must ask yourself: what can I give to all those places? And when you have found the answers, you will know why you want to visit those places.”

The Music of the Violin

A couple of weeks ago, I watched Sergei Polunin’s documentary ‘Dancer’, a fantastic insight into what the deadly combination of talent and hard work can do — it can make you wildly successful, but can also break your spirit. It left me wondering, how much of his childhood had Polunin lost because of his mom’s insistence on ballet?

The Music of the Violin is about a young African boy whose mother insists on his violin playing, a white man’s symbol, for which he is ridiculed by street boys and always turned into a spectacle for both willing and unwilling guests. It shows how parents can bring disaster upon their children — because they may say ‘Ignore the savages’ but it is you who has to go out there and listen to a big bully tell you that he wants to fuck your sister while you play music in the background.

And as for the children of all developing world, reeling under a double cultural consciousness, they will always be stuck — either they please the street and fit in, or please their parents at home and be ostracised.

In the ideologically most fascinating, powerful and comprehensive stories, Ndebele pitches an old teacher who had raped his student versus her brother, an idealist youth of a pure, all-consuming desire to rise above the lethargy of today, Zani. Zani could well be the product of the Uncle’s teaching to his mshana, and he is the man who lived with books so much, he forgot the people. The two meet for the first time at a train station and from there on, there begins a conflicted journey that includes rebellions, conformity, the Teacher’s confrontation of his own past, of his own self and Zani’s vision of the present and the future.

In the middle of this, is Zani’s lover Ntozakhe, his sister Mimi, the teacher’s wife Nosipho and the bonds of love, hate and the in-between that define their lives. The teacher reminds you of Humbert Humbert in places, but this character is far more tired of himself, conflicted within himself and is constantly trying to punish himself, deliberately landing in socially disastrous situations. It the most surrealistic of stories, where visions and forms intermingle with real worries and real people.

“And you will learn, that you cannot put aside everything in the pursuit of your dreams.”

Ndebele’s prose is haunting, poetic, accurate and lyrical. It rings of something deep and true, a wisdom bestowed from the depths of the earth. The collection, with characters that occur in every story, is confined to a small geography, but echoes the worries and truths of all civilisation. In these words you will find that time can stop, and that perhaps all of humanity lives the same moment again and again, repeatedly, without end, repeating mistakes, repeating its analyses, its actions, its rebellions but never quite moving forward. “Isn’t it what we have lost; the demanding formality of civilisation?”

But I learnt one lesson out of all this. It is that we should have stuck to our science. You see, too much obsession with removing oppression in the political dimension, soon becomes itself a form of oppression. Especially if everybody is expected to demonstrate his concern somehow. And then mostly all it calls for is that you thrust an angry fist into the air. Somewhere along the line, I feel, the varied richness of life is lost sight of and so is the fact that every aspect of life, is it can be creatively indulged in, is the weapon of life itself against the greatest tyranny.”

Final Verdict: ????? – Buy a hardback and show it off in yur bookshelf! And then wait for a signed anniversary edition and buy that too.