In Conversation With: Jahnavi .. 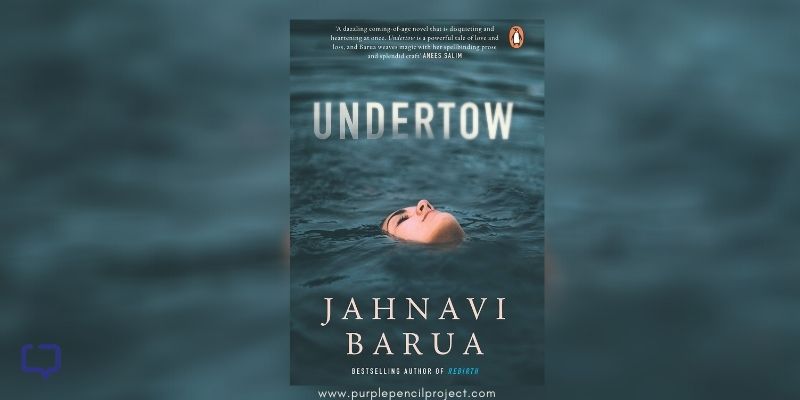 Undertow by Jahnavi Barua, a family saga spanning three generations, explores love, kinship ties with mother-daughter relationship at its fulcrum and loss – of identity/belonging against the backdrop of volatile state politics in Assam.

“Kinship ties were never felt more keenly than on days they were loosened or severed”.

Undertow begins with the wedding of 23-year-old Rukmini Goswami in December of 1983. Rukmini, daughter of Torun and Usha, marries Alex, a Christian from Kerala, her classmate in the Guwahati Medical college against Usha’s firm diktat.

Torun neither dissuades her from marrying Alex (in fact, he aids her safe passage from home to the wedding venue) nor stops Usha from castigating Rukmini. Arun, Rukimini’s elder brother, escorts her to the wedding venue at Robin’s (Torun’s school friend) house.

Usha always doted on Arun but had a strained relationship with Rukmini whose needs were solely taken care of by Torun. Besotted by his charming and dutiful wife, Torun made no attempts to mend the fractured mother-daughter ties and passively watched Rukmini’s eviction from the family. Branded a traitor for betraying Usha’s trust and marrying an ‘outsider’, Rukmini becomes one herself, leaving behind everything familiar and embracing the unknown in the faraway city of Bangalore.

Fast forward 25 years – their daugther, Loya Alex, flies from Bangalore to Guwahati. She is keen on studying ‘the effect of the loss of tusks in the Asian male elephant on selection in breeding’ – her PhD thesis for which Kaziranga sanctuary makes a perfect setting.

In reality, it is an irrepressible restlessness in her to find a closure to Rukmini’s estrangement that marred her life too over years that brings her to the Yellow House, a month before her field study commences. Things, people, and places have changed, and Loya has only the remnants of her mother’s past work with, and seek answers from.

The grandfather-granddaughter duo nearly salvage the familial bonds when a strange twist befitting the title jolts the readers.

Jahnavi Barua’s Undertow has exquisite prose. The description traditional Assamese houses, the bountiful nature, the five-course Assamese meal, singaras, chanachur are a feast to the senses. The contrast between Guwahati and Bangalore in landscape, political climate, even the furnishing and interiors in homes drawn clearly shows the author’s impeccable attention to detail. Kinship terms in Assamese like Deuta, Aideo, Bhonti, Koka, Majoni, Khura add a certain intimacy. The Yellow House, named Arunoday, at the top of a low hill with the river Brahmaputra skirting around its base exerts an inexorable pull which only ‘home’ has. The author treats mekhela sador as not just a traditional dress of the region but an embodiment of love and memories.

The tempestuous river Brahmaputra, benevolent in cradling life in its arms and merciless in wrath during monsoons, is a character too, the bravest one for its murmur defies the absolute silence on days of political strikes in Assame.

Barua skilfully balances human relationships on a see-saw. The 75-year-old friendship between Torun and Robin, the unswerving loyalty of the team of four servants to Torun, Torun and Usha’s fruitful married life never dulled by children and familial obligations are heartwarming examples.

Just as it shows thriving relationships, it also shows tumultuous ones, as in the case of Rukmini and Alex, and Rukmini and Usha.

You cannot pour from an empty cup and to see Rukmini who never received a fair share of motherly love struggling to deliver well to Loya leaves a heartache.

Tidbits of Assam’s history such as the Battle of Saraighat and Yandabo Treaty, students agitation unto ULFA insurgency weave a delicate backdrop for the story.

The ‘othering’ based on race, religion, gender, region or any distinguishable trait causing an insider-outsider dynamics within home and nation is deftly handled. Usha’s patriarchal mindset, Alex’s mother alienating Rukmini, the AASU agitation that led to Assam accords all stem from it.

For those who have read the author’s Rebirth, it is hard to turn a blind eye to few similarities. Both Rukmini and Kaberi of Rebirth are meek and highly submissive, this shown as a root cause for the problems they face. Both move to Bangalore from Guwahati post marriage and are deserted by their respective husbands for the sake of another woman.

Description of Richmond Town in Bangalore, the cityscape of Guwahati, usage of the students’ agitation in Assam as a political backdrop and historical reference to the Shan rulers from Burma here and in Rebirth sound familiar and repeated.

Also a revelation in the penultimate chapter leaves a loose end in our understanding of Torun despite Barua providing a sense of closure.

“You have to reach out and claim what you want. No one is going to come and gift it to you.”

Undertow in stunning prose, through a web of human relationships and a myriad important themes defines a place called ‘home’.