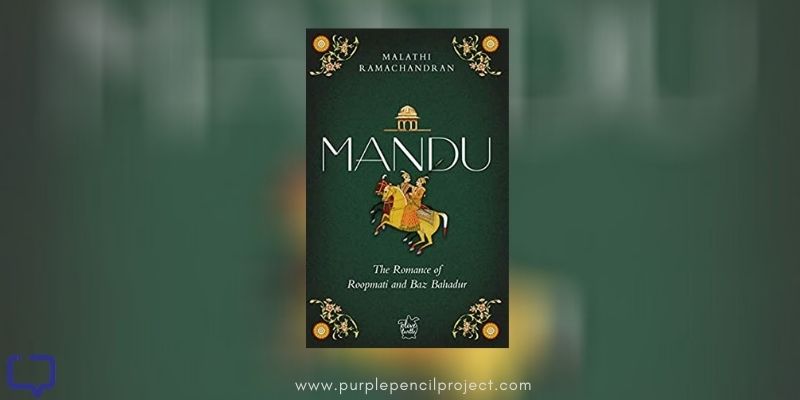 The Romance of Roopmati and Baz Bahadur

“The loved one gives the heart the peace it craves.

For thou art fled! And life holds naught for her

A love story and a historical fiction tied beautifully with a string of heart-touching poems and songs, Mandu: The Romance of Roopmati and Baz Bhadur shows its readers how true love can transcend every barrier. Baz Bahadur, the last Sultan of Malwa, is a poet and musician with a dark and bloody past. He falls in love with Roopmati, a village girl devoted to the Narmada River.

Before discovering her love for fiction, Malathi Ramachandran wrote short-stories, travelogues and anthologies. It is probably her love for history and cultural heritage that encouraged her to pen down a beautiful historical fiction, Mandu: The Romance of Roopmati and Baz Bhadur – her fourth novel. In the prologue to this novel, she promises to “whisk the readers away to another era and love other lives between the covers of a book” and she does stay true to her vow!

Set in 16th century India, Mandu: The Romance of Roopmati and Baz Bahadur is said to be based on a true story about Sultan Baz Bahadur and the beautiful Roopmati. Enchanted by her melodious voice as he rides near the Narmada, Baz asks Roopmati to accompany him back to his palace, where both of them could have countless mehfils, filled with art and music. However, Roopmati is not ready to part with her beloved Narmada, and posed a condition to the Sultan that she would only accompany him if she could see her Narmada from the palace.

Fulfilling her condition in a way totally unimaginable for Roopmati, Baz brought her home. Who knew that the love for classical music would not only make them great friends but also lovers to look up to? However, tension was brewing in Agra at the Mughal Emperor Akbar’s palace, who was planning to capture Mandu. The prize would not only be the wealth of the kingdom, but even Roopmati. With the ominous sword of a Mughal attack hanging on their heads, will the two lovers be able to unite?

“The forests cluster together like maidens huddling to gossip, their whispers lost in the clamor of calling birds and rustling breezes. And the Narmada, the sensuous, captivating river of the plains, she needs no adornment, but will not listen.

What makes the novel distinctly stand out is how the natural world is personified and used as a symbol reflecting changes as the plot carries on.

So at one point, if the trees “huddle together like maidens”, at another point, “a voice, a laugh, a song carries on the chameli-fragment and then the river and the forests wait with bated breath, knowing that history is about to be created here yet again.” Nature becomes a spectator and witness to history and of the love story all ready to unfold.

Undoubtedly, the river Narmada plays an important role in the story. She is mother personified for Roopmati, who, just like a child, can’t bear separation from her mother. She sings for the Narmada and talks to her in times of distress. Her daughterly relationship with the Narmada is clear when she says, “Oh mother, teach me to be a woman like you, loving and giving and holding all the pain and smiling through.”

That is why she places before the Sultan the condition that she would only accompany him if she gets to see her Narmada every day. For Roopmati, Narmada isn’t just a river, but a mother and a muse. The luxuriousness of the Sultan’s palace doesn’t please her, for she is sunk in the thoughts of her river, “sweet smells, do not fill my senses. My mind and heart must be empty for the muse, for when the notes and beats pulse through the self, for everything else, there will be little use.” The changing moods of the Narmada, with the changing time of the day has been beautifully captured in the novel:

How many moods of you I see, my river! Sparkling with laughter at sunrise…then when the world lights up, calmly blue as the sky above…swishing past, carrying the cold mountain waters down to lands where they are thirsting for you. Sometimes a deep dark green, as secret as the forests you skirt. And when the monsoon clouds break over you, you hold out your arms and embrace the muddy swelling waters in them as they thunder past.”

Women in the novel

“You speak of all you want! You want me to listen to you sing, and to sing for you, to recite for you, to inspire you! But, Huzoor, what about what I want?”

Often born and brought up in a patriarchal society, where a tape of submission is tied fast across their mouths, women hardly have the audacity or the privilege to give voice to their opinions.

Roopmati, however, appears to be a foil of every such woman subdued in patriarchy. The above quote from the novel finds her questioning the Sultan about why it is that only the convenience of the man is taken into account. Why is it always the woman who has to give up the comfort of her life, to be with a man, on the promise of marital bliss, in a totally strange household? In saying this, Roopmati clearly asserts herself as a free-thinking and independent woman, who dares to flout the social norms of marriage. Unafraid of the Sultan’s authority and position, she tells him that she doesn’t need a man to make her complete. However, at no point does she hold a grudge against the other sex. She talks lovingly of her Guru and her father, and later, Baz. She accredits them of having made her what she is today.

They taught me that being a woman does not mean I am only what my body can do…cook and clean and bear children and look decorative for a man. They taught me to be a person in my own right, and to express my thoughts, my opinions, and my needs as much as a man.

Baz gazed at her in fascination. The women of his family and his concubines, his singing and dancing girls…they only lived to snare a man and hold him in their power for money and jewels and gold.

This extract from the novel brings out a brilliant contradiction. While Roopmati, a simple village girl is so opinionated and fiercely independent, women belonging to a higher stature, like Baz’s wife Hiba, are leading a very superficial life. Beautiful yet unintelligent, Hiba’s physical attraction does not compensate for her mental dullness – at least not for Baz. The Sultan starts distancing himself from her as soon as he learns that she has no interest in the arts and music, nor is she learned and opinionated.

The only woman in the royal household who stands in stark contrast to Hiba and the concubines is Saadiya. Learned and intelligent, Saadiya can talk for hours about a certain issue. Her intelligence is beautifully balanced with her sense of humour, and she can make Roopmati laugh till she has tears in her eyes.

Yet another interesting character in the royal household is Jana Begum – Hiba’s mother. A conniving and shrewd woman, she can do anything to satisfy her ego. She lays out a cunning plan to get rid of Roopmati, who, she believed would have taken her daughter’s place in the household. But what the reader questions is – was it out of love for her daughter that she prepared this plot or to satisfy her ego and maintain her position in the royal household? Throughout the novel, the reader gets several instances to confirm that Jana Begum wasn’t particularly proud of her daughter, who she thought was dim-witted and forever cribbing.

Mandu: The Romance of Roopmati and Baz Bahadur beautifully captures a love story nestled amidst a royal setup, controversy and a dark past. While Baz bewitches the reader with his gentleness and his love, Roopmati mesmerizes us with her soulful songs and poems. For people who enjoy historical fiction, this novel is highly recommended!

The narrative, however, could have etched out certain characters, like that of Saadiya and Hiba, more deeply than was done.

Voice of an angel, showering your favours on me

As the tree showers her petals down

Your song has shrouded all my griefs

And buried them, covered with flowers.

We encourage you to buy the book from your local bookstore as far as possible. If not, please use the link above and support us. Thank you.