onWriting is the online media partner for Ethos Li...

onWriting is the online media partner for Ethos Literary Festival 2018 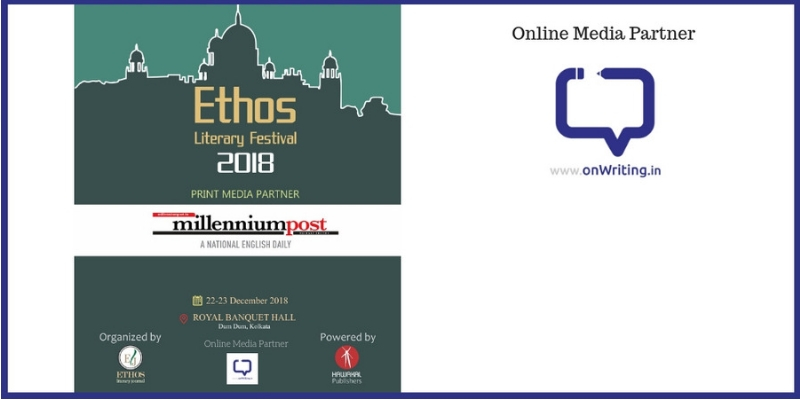 It’s the season of literature festivals and I have been busy looking at as many of them as possible to understand what the 333 fests, or at least some of them, are up to (on which a longer analytical feature will be out soon).

It was on such a lit-hunt that I stumbled upon the Ethos Literary Festival 2018, organised by the Ethos Literary Journal and Hawakal Publishers. It looked, to borrow from the vocabulary of grooming, neat. Schedule in place, inclusion of indie publishers and writers, and discussions that revolved around literary activities, with a special focus on poetry.

One tweet and an event listing was acknowledged in a Facebook post from Kiriti Sengupta, the Chief Editor of ELJ and one phone call, four emails and much mutual appreciation later, here we are: the online media partners of the bi-lingual Ethos Literary Festival 2018, to take place from December 22 to December 23 at Doom Doom, Kolkata.

It is not that literature lives in a silo. At the end of the day, all art is political and arises from the society. However, I would rather discuss the state and prospects of Haiku poetry in India than a discussion on ‘How I wrote my first cookbook’, would you not? This focus on the written word is what convinced us of the promise we spoke about in the tweet that started it all.

Among the many sessions spread over two days of the event are Poets as Astronomers: Exploring Space in Contemporary Poetry, English Poetry in North-East India, Haiku & Haibun: Prospects in India, Female Aesthetics in Poetry and Impressionism to Plagiarism: Poetry in the Age of the Internet.  Besides, there are several sessions in Bengali too.

Over the next three weeks, you will meet the authors and poets participating in the festival who will give you a sneak peak into what to expect from their discussions and on their thoughts on the contemporary literary scene in India. We will, on our Facebook, Twitter and Instagram, discuss the issues raised in these sessions too, to take the discussion offline. And many more things will emerge, as we go along.

Here’s to celebrating diverse literature and looking beyond the mainstream.