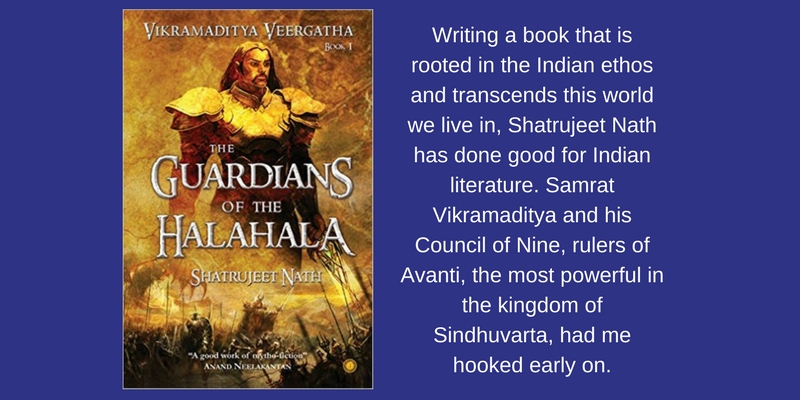 We received a copy of this book from the author. That does not affect the review below. It is honest and unbiased.

Indian fiction often seems to be lacking in two fundamental things for the larger part – scale and imagination. When I read the Meluha trilogy, I was happy at the potential the story held but terrible pacing and very basic writing took so much away.

A book’s worth is how well you remember the characters of a book – they begin to live within you. Meluha was very okay while it lasted and entirely forgettable.

Especially with fantasy books, because everything is constructed, quirks and moments tend to stick. LOTR, ASOIAF, Harry Potter, The Inheritance Cycle – I have lived through with these characters and found myself relating to their problems, living vicariously in their journeys. I was transported to another world.

This is where the Guardians of Halahala scores. And scores well. Writing a book that is rooted in the Indian ethos and transcends this world we live in, Shatrujeet Nath has done good for Indian literature. Samrat Vikramaditya and his Council of Nine, rulers of Avanti, the most powerful in the kingdom of Sindhuvarta, had me hooked early on. I found myself in this world of old, where the three planes, earth, heaven and hell were always looking to outdo each other. The story, that seems to take a linear progression, begins with the unleashing of the Halahala, a liquid that is the opposite of the elixir of life – it is the destroyer of creation.

Many thousands of years later, Shiva – The Omniscient One, puts the remainder of the Halahala in the care of Vikramaditya. This marks the beginning of the most difficult days of Avanti, battling trouble in the east as the Magadhan empire seeks territorial expansion, in the north and west as the Hunas and Sakas, former enemies of the kingdom come back for revenge and capture and the onslaughts of the demons and the archangels..

The kingdom of Avanti, under the powerful council of Acharya Veer-Bhatta, Shanku, Kshapanaka, Dhanavantri, Vararuchi, Varahamihira, Amara Simha, Ghatalarpara and Kalidasa manage to defend two deva attacks, one demon attack and have managed to so far  keep abreast with the truth about the movements of the eastern and western threats.

Powerful though the humans are, how far will it take them? For how long can they protect the Halahala? And what will the Council of Nine discover about themselves?

At this the first book in the series ends. It is a very good fantasy that uses some of our favourite historical and mythological characters and weaves a captivating story around a moral question – how far will the king go to keep a promise made to an ancient god?

Yet, because it has potential, you cannot help but see how this also falls short on many accounts.

I for one, would have wanted a book cover that didn’t look like a movie poster and chapter titles that were too brief and, not misleading, but neither intriguing.

Too many people of the Council seem to have been benefactors of the palace, as they bring in one or the other member first for protection and care, recognising them eventually for their capabilities. Kalidas, Shanku, Vishakha the queen, Kshapanaka all have a very similar backstory and it take away from the richness that their characters otherwise have. The council are shown to have superpowers that they don’t fully understand and I am hoping that there are stronger reasons for their inclusion in the council than the good faith of the palace of Avanti.

Towards the end, Vikramaditya makes a journey to the Borderworld; here, like in the scenes taking place in heaven and hell, there is great potential for the writing to be something surreal and elevated, but the writer sticks to the basics – correct English and mechanical descriptions.

The overall language and style suffers, from too many adjectives and repetition of words and the most basic of mistakes – explaining too much. Every prophecy by Mother Oracle is explained and decoded, giving the reader little chance to put it together himself. There are entire paragraphs where a word appears nearly four to five times. Consider this sentence – “…he lunged at the drunkard. The drunkard let out a scream…” It appears at least two other times in the next paragraph. To a discerning reader, this just gives a headache. Consider this sentence – “The rich, fragrant, cardinal red wine…” Doesn’t the sentence seem too crammed?

Using italics for words with Indian origins too is not entirely uniform – like the editor wasn’t sure if he wanted to italicise all words with Indian roots or some. If there is a pattern and reason to this, well and good. I couldn’t see one.

The caricatures of Indra and apsara are not interesting; they’re drab. Heaven and earth don’t feel different and hell only evokes eternal damnation because of the river of eternal fire. The apsaras do nothing but look seductive, and even here, the writer falters to really let their flirtations and seductions arouse anything besides a, “This is so much like a TV serial.”

There are evident flaws in the way the book is written. But the story is riveting and I definitely want to read more. A little more lucidity in writing, and this could be a good fantasy.

Pride and incompetence – what more harm need anyone inflict on his fellow beings, my king? 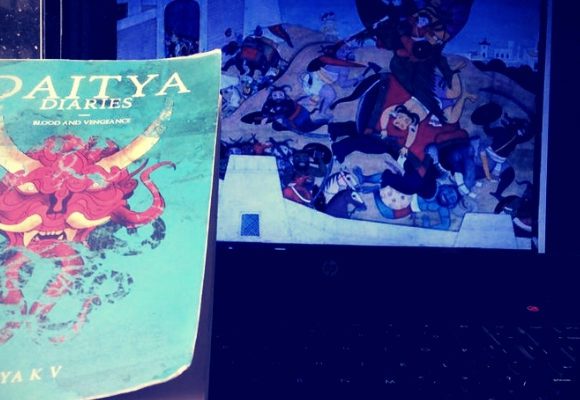 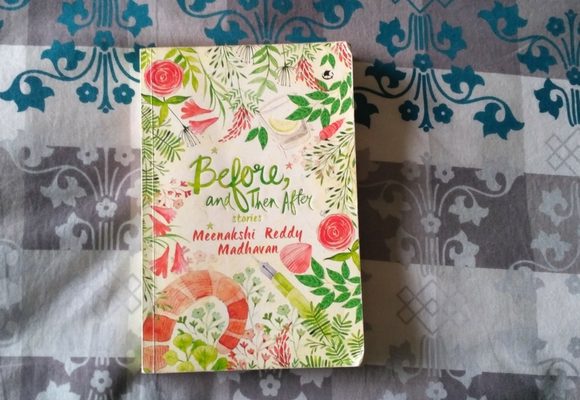