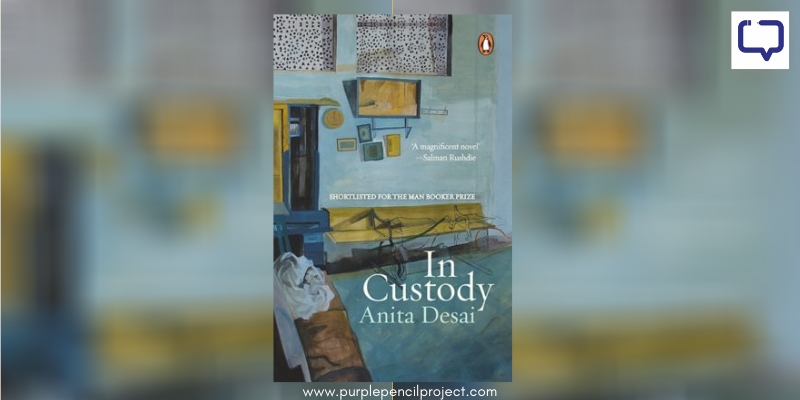 The story is set partially in a town called Mirpore and partly in Delhi. Deven, the protagonist, teaches Hindi at Lala Ram Lal College. Leading a dreary existence in a small town, Deven has just one passion to look up to – Urdu. Hence, when his condescending college friend, Murad, gives him the offer to interview Nur, the legend of Urdu poetry, for his magazine, Awaaz, Deven cannot refuse.

On visiting Nur’s house in the heart of Chandni Chowk, Deven’s notions about the great idol begin to fall apart. Nur is hardly the dignified poet that Deven always dreamt of meeting. After a lot of indecisiveness, Deven finally makes up his mind to interview Nur. He manages to procure a tape recorder to record Nur’s recitation of his poetry.

However, due to a string of reasons, the project does not phase out favourably.

“How can there be Urdu poetry where there is no Urdu language left? It is dead, finished. (…) So now you can see its corpse lying here, waiting to be buried.”

The connoisseur of Urdu poetry, Nur, has been Deven’s idol for all long as the latter can remember. However, he soon learns that Nur is an absolute contrast to the legend that Deven has always revered. With food spilt over his clothes and his constant groans, the poet is in a state of decay, just like the language that he writes in. As he waits for death to engulf him, his house has transformed into a mehfil, where loutish men, like parasites, feed over him. Nur is at his worst towards the end of In Custody, when he repeatedly asks Deven to get him admitted into a hospital and take care of his son’s education.

The head of the Urdu Department, Abid Siddiqui, is a personification of the past era of Nawabs. The condition of his huge ancestral house which is in an “advanced state of decay”, and his loneliness accurately show his decay, much like the Urdu Department, that is “as empty as the cell from which the condemned prisoner is extracted to be hanged”.

“…a cruel trap, or prison, as well, an indestructible prison from which there was no escape.”

Anita Desai characterises Mirpore as a land that is dry and dusty. Dust is a common motif that the reader will find throughout the text and it mostly refers to a sense of suffocation and entrapment, a space with the least of opportunities. “Mirpore’s addiction to total dehydration” has, thus, entrapped Deven within its claws. This “indestructible prison” is, not only a symbol of the dreariness of Deven’s life but also that of its other inhabitants, who are mostly men without aspirations.

“…It was not my fault! I worked hard…but I was fooled and cheated by everyone…”

The idea of helplessness can be observed most deeply in Deven, who frequently tries to escape his troubles. In the college, he will somehow find a way of ignoring his students who make fun of him. At home, he escapes from his responsibilities towards Sarla and his son. His escapism can also be seen in his relationship with Nur, as, after the first astonishing encounter, Deven runs away to the “safe dustbin of their world”, promising never to return.

At many times, the novel seems to sympathise with Deven, in calling him a “trapped animal”. However, when the tape recording fails miserably, the readers are bound to ask whether he was actually fooled by everyone or was this a result of his own incapability?

In Custody hints towards the existence of two kinds of women in the misogynistic society – Sarla, whose voice has been killed or Imtiaz – whose assertive nature has brought her a lot of contempt.

“…For malice is often mute.”

In Custody shapes Sarla as a woman who has given in to her husband’s domination. She will quietly resign to all her husband’s tantrums, without ever daring to raise her voice against him.

A girl who always dreamt of marital bliss, Sarla’s dreams and aspirations are now suffocated to death. Never daring to aspire for a car or a telephone, she has killed all her notions of “the magazine dream of marriage”.

All Sarla can now do is to hide herself and her contempt behind the kitchen door – the only space in the house that truly belongs to her and where she takes solace every time she has a complaint against her husband.

The readers see Imtiaz from the eyes of Deven, who, from the first sight, disliked her. Using animalistic imagery, Deven tells the readers how she, in reciting a poem before Nur, is trying to take his position and popularity. This “monkey” with her “raucous singing” can never hope to find a place anywhere near Nur – a parallel that Desai draws with the common perception of some male authors who feel that women cannot make good writers.

The title ‘In Custody’ starts to make sense towards the end, when Nur declares Deven as the custodian of his genius and artistic work. However, Deven as well as the readers later discover that he is also the custodian of Imtiaz’s work, when a letter from her arrives at Deven’s door.

Final Verdict: The distinguishing factor about In Custody is that its prose is almost poetic with lots of symbolism and imagery. The story is a realistic picturisation of what ordinary life looks like. For readers interested in dwelling into a slow-paced yet realistic tale, this one is a must-read!

We encourage you to buy the book at a local bookstore. If not, you can use this link and help support us.

Anita Desai is an Indian novelist and the Emerita John E. Burchard Professor of Humanities at the Massachusetts Institute of Technology. As a writer she has been shortlisted for the Booker Prize three times. She received a Sahitya Akademi Award in 1978 for her novel Fire on the Mountain, from the Sahitya Akademi, India's National Academy of Letters. She won the British Guardian Prize for The Village by the Sea. She is also a 2014 Padma Bhushan awardee, among the highest civilian honours granted by the government of Indi.