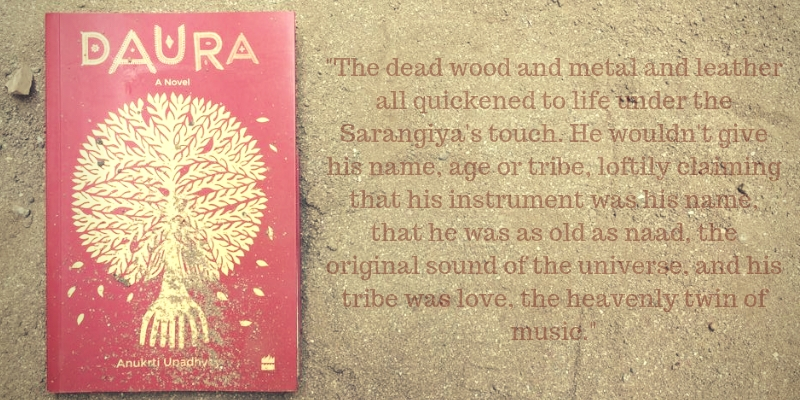 The cover itself draws you in. A maroon background, a sand-yellow illustration of a tree (a kalpavriksh, perhaps), and the beautiful typeface, designed by The Typecraft Initiative add to the mystic element that the blurb promises the reader. Daura, author Anukrti Upadhyay’s debut work of English (released together with Bhaunri, about which, in another post), is a work of literary fiction that is a mystery, a song and a folktale rolled into one.

The narrative (written in an epistolary format), follows the investigation on ‘The Collector of __ District, Rajasthan’, and the accounts of several people associated with him – his all-serving orderly, Mathura; Nat girls from the village who are indebted to him for their new-found land rights; the Tehsildar who feels his authority has been overridden; the camel-rider who travels with our second-in-lead the Sarangiya; the Medical Officer who has to observe the Collector, the Senior Suprintendent of Police who is overseeing the whole investigation, a notation by the Chief Secretary, and excerpts from the Collector’s own journal.

The desert, its expanse, the music and a folktale come together in this investigation, and the reader is taken on a rather amazing journey.

The science of culture and the culture of science

At the heart of the ‘plot’ is the Collector’s obsession with a folktale, and his powerful belief that what the folktale says is true. It begins with the story of an enchanting Princess trapped inside a tree and how the Collector wants to get one glimpse of her. This obsession does in no way hamper his role as an administrator, but only enhances it.

Based on this folktale, he begins the construction of a canal in the tehsil, one that lives and dies with the beliefs of the people, one that lives and dies with the natural habitat of the desert. If you are culturally inclined, the triumph of nature and story over man and greed, the triumph of the mix of art and science over blind logic will delight you.

To take the elements of folk, of Indian folk and transport them to English is not easy, but Upadhyay succeeds by liberally using a colloquial vocabulary. So paying respects is to say ‘ghani khamma’, the Sarangiya (sarang player) is not an artist but a ‘kalavant’, tents are ‘dhaanis’. When she writes, ‘After all, everything is destructible’, she uses the word ‘naashvaan’,  and when she wants to say ‘web of enchantment’, she says ‘inderjaal’.

The local imagery too is brought alive, we meet and hear of the local peoples, like the Kanungos and the Patwaris or the Nats and the Rabaris, of the dialects of Dhoondhani and Mewati, of the Kalbelia and Nat dances, and time moves from Ashadh to Shravana, and Jeth (Jyaishthya) and Bhadon (Bhadra).

The description of the desert itself completes this transition of the reader from the city to the sand dunes of Rajasthan.

Where this flavour does not come out is in the description of the music of the Sarangiya, an important element, almost a character in the novel, but then again, describing music and its effects is a much harder challenge in itself.

Daura has its roots (literally and figuratively) in a folktale, in the surreal power of music, in the quiet mysteries of the desert and its people, but the plot plays out very much in real life. You meet the frustratingly familiar bureaucracy, the people who will bow too low to the government, the people who will want to win favours, those that will ignore the rights of the minorities and brandish them as ‘mere nomads’, ones that will guide and rule neither from head or heart but from position and power alone. This connection, this clash of spirits that are free and caged, the clash of truths of the tribespeople and the government employees, plays out wonderfully in Daura, a folktale you will appreciate more after you have read it.

How can we say whether any of these love stories are true? But it is certain that, under the desert sun, only the hardiest of things grow – like us Nats and black deer and khejri and keekar – so why not persistent, maddening love which cares nothing for life or sanity? It is a part of the desert’s hardships.

Final Verdict: 5/5. This is a beautiful book to display on your bookshelf. Buy it here.

Recommended for: Everyone who loves a good tale, a fairytale and a madman’s tale and a true tale. Anyone who resonates with George R R Martin, when he writes, “There is something old and true in fantasy that speaks to something deep within us.”